The True Test of a Man, Part 2

Previously, on MinerBumping... Highsec miner Ria'ac Aideron became enraged after Agent Lenda Shinhwa ganked two of his Retrievers and pods. After having a nice chat with Ria'ac, Lenda was no closer to getting Ria'ac to accept the Code. Instead, Ria'ac doubled-down by producing more hostility and invective.

Lenda had no choice but to put Ria'ac on the Red Pen list. Concerned about the carebear's future, Lenda checked up on him and was appalled to see that he'd hit rock bottom--mining without a permit in a Venture. This resulted in a convo request.

Like so many other highsec miners, Ria'ac pretended not to care about money. Lenda wasn't fooled. By their very nature, carebears care. Ria'ac coughed up the money.

The 10 million isk was transferred to its rightful owner. This was a good start.

Ria'ac's ignorance got the better of him. He had no idea that he still owed an additional 30 million isk. He was in more debt to the New Order than he knew. And without paying the full debt, his mining permit was useless.

Ria'ac had a lot of learning to do. He didn't know whether or not he could trust Lenda to keep his word. Can you believe that?

Ria'ac was a sworn enemy of the New Order, but after being ganked so many times, he began to reconsider the road he was on.

It has been my experience that miners learn more about proper EVE play in 10 minutes of reading the Code than they learn in all the weeks, months, or years preceding it.


Ria'ac Aideron > not to be mean or anything but why are you guys so sensitive about being insulted?
Ria'ac Aideron > 30 mil? for insulting?
Lenda Shinhwa > Don't you expect to be treated respectfully?
Ria'ac Aideron > well yeah but do you really want to charge people for insulting? theres always going to be pissed off players that insult you like me
Lenda Shinhwa > That is only because they have not decided to live by the Code. But really, we could charge for whatever we want. I think 10m for a permit and 30m to get off the red pen list are way to small amounts. But James 315 sets the fees.
Ria'ac Aideron > and how can players have freedom if you guys are charging this kind of money? isnt that what the code is about? having freedom?

Ria'ac was on the verge of converting to the Code, but he still had questions. Having questions is fine. Agents are here to answer them.


Lenda Shinhwa > Even freedom has limitations placed on it for the good of the community. New Eden is certainly a community.
Ria'ac Aideron > so to teach people you kill them and make them lose hard earned progess? yeah because that definately sounds like freedom to me
Lenda Shinhwa > minerbumping.com is the most widely read eve blog. we are also widely mentioned on the eve forums. All the warning that need be given has for any pilot that actively participates.
Ria'ac Aideron > ive been telling my friends about you guys to make sure your legit
Lenda Shinhwa > Cool.
Ria'ac Aideron > and apparently you guys are pretty well known

Lenda mentored Ria'ac like a pro. Had the lessons sunk in? Later, Ria'ac opened up a new convo with Lenda.

At last, Ria'ac was willing to put his bot-aspirancy behind him and walk a new path. 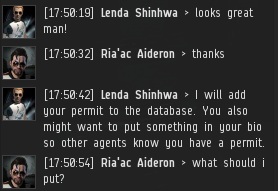 Having willingly given up his money for the sake of a better highsec, Ria'ac was a new man. 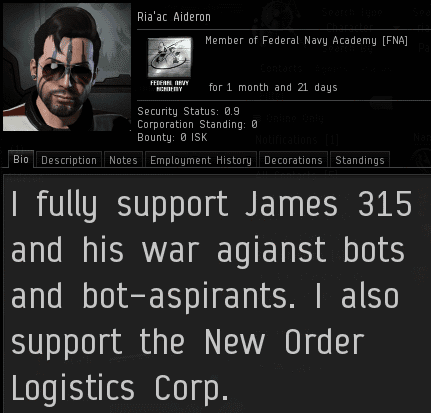 Now everyone who came into contact with Ria'ac in the asteroid belts could learn from his example. From Red Pen to blue ribbon! 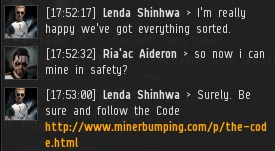 Like a proud father, Lenda patted the young lad on the back and reminded him to build his EVE career upon the solid foundation of the Code. 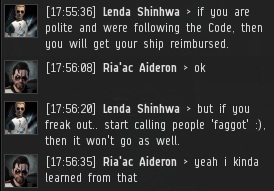 'Twas another extraordinary victory of the New Order, which wins hearts and minds as well as battles. 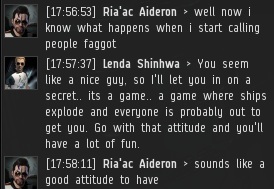 Ria'ac assured his mentor that he would play EVE the way it was meant to be played. The New Order way.

Later, Ria'ac went searching for an Agent of the New Order to see if he could get his dead Retrievers and pods reimbursed. He came across Agent Ophidia Black. No longer in the presence of the man who had ganked him three times, it was time to find out if the carebear's conversion to the New Order had been sincere. Ophidia decided to put Ria'ac to the ultimate test.