The Redemption of Capt Lynch

Capt Lynch is a name that any long-time reader of MinerBumping will recognize instantly. During the first few months of our existence, Lynch was among the most famous enemies of the New Order. He claimed that his brother had been unfairly treated by one of our Agents, but the entire story turned out to be a lie. His encounters with our Agents (which usually involved getting him tangled in his own lies) and his subsequent fury at seeing them written about on MinerBumping, became the subject of even more posts.

The Lynch situation escalated to its highest point when he began attacking the New Order on EVE-O. He claimed to be suffering from suicidal thoughts--a claim which he then quickly retracted. Later, Lynch reported that CCP had gotten the local police to visit him at home in response.

On occasion, however, Lynch's relations with the New Order thawed a bit. Anslo, leader of the infamous "Proveldtariat" resistance movement (recapped in a recent post) inadvertently alienated Lynch when trying to recruit him, thus forming the basis of an uneasy Lynch-Order axis against the Proveldtariat. Ultimately, however, Lynch cut his ties with the New Order and disappeared, not to be heard from again. Until now.

The New Order community was stunned to learn that Capt Lynch received a Supreme Protector's Tip of the Hat™ when he purchased a billion isk worth of shares. 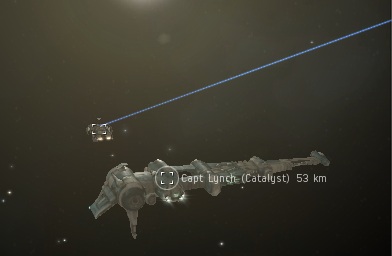 In Kamio, a Catalyst piloted by Lynch crept toward an unsuspecting miner. What was going on?

An hour later, the miner's wreck and the presence of Concord suggested a startling answer to that question. 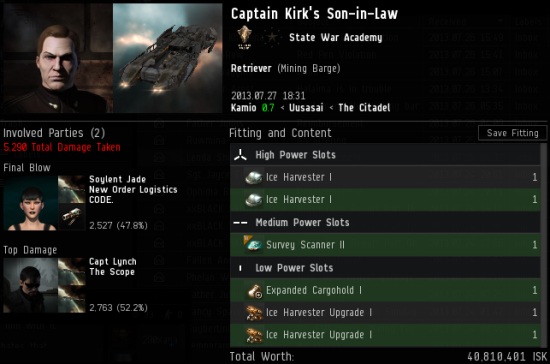 A Retriever had been cut down in the middle of an ice anomaly, guilty of violating the Code. Both Capt Lynch and a member of New Order Logistics were on the killmail. 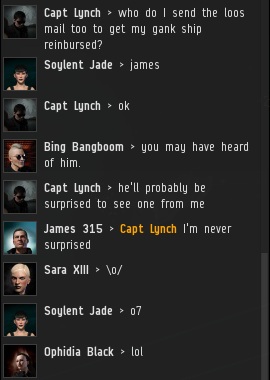 Like I always say, I'm not in the business of rescuing 51% of highsec. We don't pick and choose which people we want to save. We're here for the whole enchilada: every man, woman, and child in highsec. 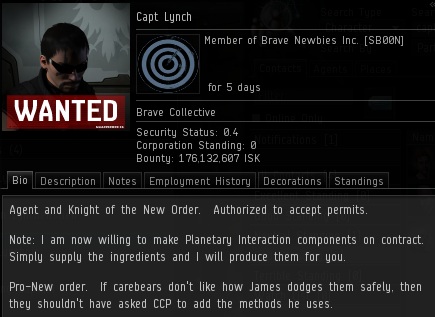 Capt Lynch proudly declared himself an Agent of the New Order and threatened to gank anyone who didn't own a mining permit. 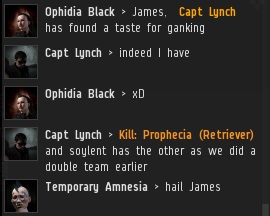 Lynch claimed to have an appetite for suicide ganking. He proved it when, lacking another gank ship in station, he used a Talos to pop a Retriever. It was untanked and vulnerable to a solo Catalyst, but Lynch was in a hurry, so he didn't mind using bigger guns. 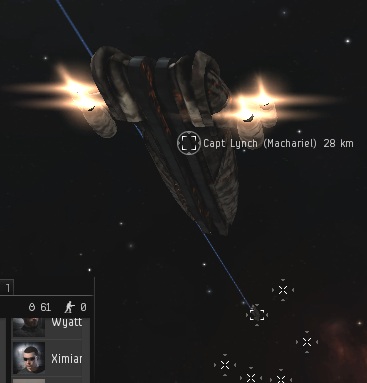 His fondness for supersizing Code enforcement was also on display when he brought out his bumping Machariel. 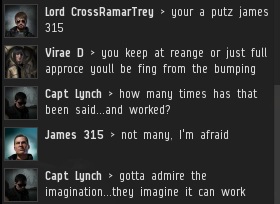 Lynch was unimpressed by the local rebels. He knew their tactics well. He knew they didn't work.

You know what does work? The New Order, the Code, and the pride that comes with serving the legitimate government of highsec.
Posted by MinerBumping at 18:37