Today, courtesy of Agent Ophidia Black, I'd like to introduce you to one of the many charming gentlemen who mine in highsec. Meet handaki, affectionately known as "the Handbreaker". 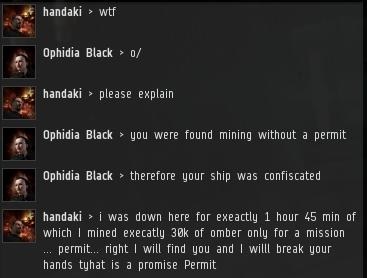 So that's how he earned his nickname. 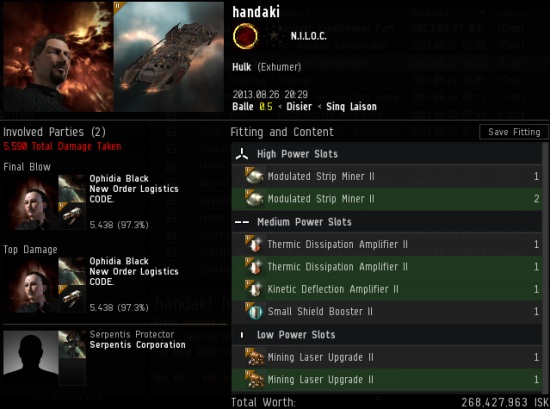 I looked up handaki's lossmail. It was a standard yield-fit Hulk worth just over a quarter billion isk. No big deal. 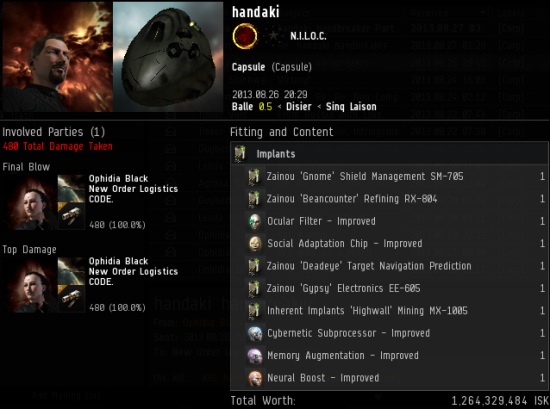 Ouch. To ensure that their message is received, New Order Agents always go the extra mile and pod their targets, if at all possible. In handaki's case, it was very possible, and he lost an additional 1.2 billion isk, just like that. Despite the hand-breaking threat, Ophidia was honour-bound to send handaki the customary "termination notice" EVEmail with helpful information about the Code.

handaki made a full confession. He was asleep at the keyboard, mentally AFK and therefore in violation of the Code. If his EVEmail reply ended there, it would be a nice little pile of carebear tears. But handaki's confession didn't end there. Behold:

Mr. Handbreaker actually petitioned himself! That's just as well, I suppose. I don't know why so many highsec miners are quitting lately, but I haven't yet seen any quitters I wouldn't be willing to part with. Scratch one more bot-aspirant!
Posted by MinerBumping at 19:32