Nothing Takes the Place of Persistence

There's no such thing as a blitzkrieg in highsec. Unlike nullsec, you can't win highsec space by getting a bunch of people in fleet for a week and then sit on sovereignty indefinitely by taking advantage of the defense-oriented game mechanics. So how do you win highsec? Through good ol' fashioned persistence.

Agent Guybertini wins hearts and minds one at a time by killing miners and sending them corrective EVEmails. Midnight0587 failed to comply with the Code even after Guybertini told him to. In fact, he compounded his mistake by commiting additional violations in a mean-spirited EVEmail. A lot of people would give up. But not Guybertini. He sent a second EVEmail, beseeching the miner to turn his life around. Guybertini received another reply:

On the surface, it looked like Midnight0587 wouldn't listen. But to the trained eye of an Agent of the New Order, it's clear that progress was made. Subtle progress, but it was there. So Guybertini sent a third EVEmail. This was the result:

...Better. Midnight0587 wasn't quite at the point where he was willing to join the New Order, but the stage had been set for future Agents to more easily shepherd the miner into line. Now let's look at another case.

Once again, a carebear was defiant. Would his attitude improve after another try?

Success! While Ahri thedog still had a long way to go, he was already confessing an earlier violation of the Code; he admitted to making pasta when he was supposed to be sitting at his keyboard.

After a third EVEmail, even more improvement was evident. By his own admission, Ahri wasn't angry anymore. Now let's see how much rehabilitation Guybertini can perform in just two EVEmails:

Right off the bat, Bastion Saissore was well on his way to happiness. Some miners are more fertile ground than others, of course.

After only two EVEmails from Guybertini, the carebear was already promising to become a different kind of EVE player. Naturally, he was just bluffing, and probably had no intention of making good on his threats. But the next time an Agent encounters Bastion, the baton will have been passed further down the track. To be clear, though, Guybertini is a well-trained Agent. He makes it look easy. Let's see what happens when a newer Agent, Temporary Amnesia, tries to reform a carebear: 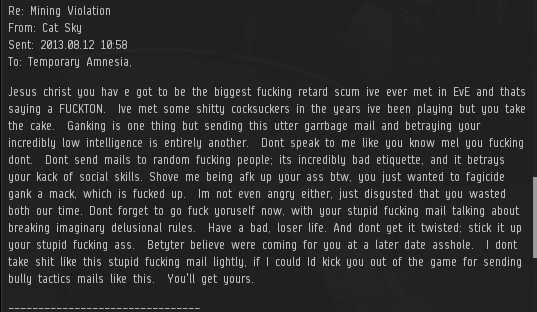 Although Cat Sky said he wasn't angry, there are actually a number of red flags in this EVEmail response. Temporary Amnesia is still learning how to mold the carebear clay into a proper EVE player. It isn't easy, but it can be done with practice. Fortunately, Temporary Amnesia already knew the most important lesson, which is never to give up. He sent a follow-up reply to see if he could bring Cat Sky closer to the loving embrace of the Order. Here's what happened: 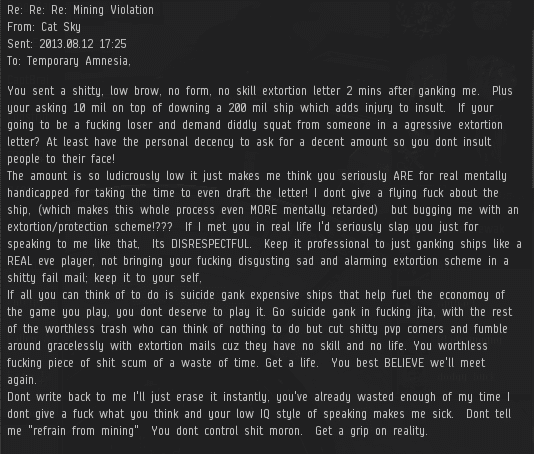 Ah. You see that? Cat Sky is still struggling, and not yet ready to join the New Order family. I commend Temporary Amnesia for the effort, however. You know, some carebears join us instantly. Others take a few days or weeks. The more stubborn carebears may even take months or years to change their minds about us. That's fine. As long as there are non-compliants in highsec, there will be Agents of the New Order bravely giving them the Code. And if we need to work on a miner for years before we change his mind, that's what we'll do. We're not out for 99% or 99.99% compliance. We want 100% at the bare minimum. No miner left behind.
Posted by MinerBumping at 22:33