Agent Galaxy Pig, a chivalrous Knight of the Order, ganked and podded a foul criminal named Boliviani diGriz. Then Galaxy Pig sent her a standard-issue termination notice. This sort of thing happens many times each and every day. Business as usual. 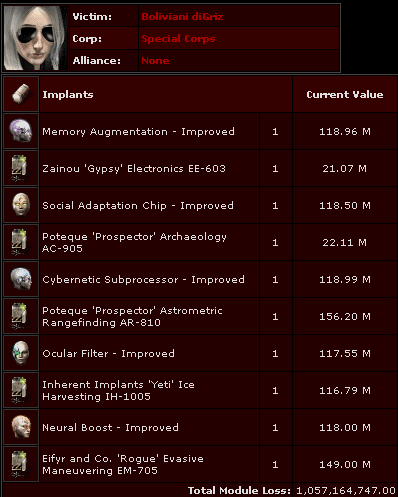 Fortune was on Boliviani's side: Her dead pod was worth over a billion isk, further encouraging her to rethink her AFK lifestyle. We see better results when a miner suffers a crushing loss, as opposed to losing their money drip-by-drip.

Boliviani stunned Galaxy Pig by replying to the termination notice with a passive-aggressive EVEmail, rather than an apology.

In a tragic turn of events, Boliviani confessed that she had flown what she couldn't afford to lose. She should have thought about that before gambling it all away on an illegal mining op. Then Boliviani thought it over for a few minutes and sent another EVEmail:

I don't like it when people try to justify their bad behavior by saying they're doing it for their children. Be honest, people, you're only going to spend that extra, ill-gotten money on yourself. If you really want to help out your kids, set a good example so they don't grow up to be criminals. Anyway, Boliviani became even more fixated on the idea of quitting EVE. She couldn't imagine playing the game in a manner consistent with the Code.

Boliviani's defeatism came on the heels of several other miners announcing their intention to quit the game just in the past couple weeks: 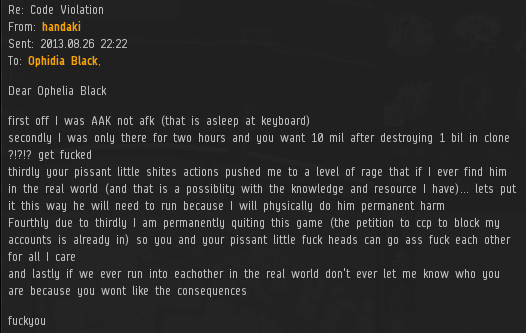 Contrary to popular belief, it's not a bad thing when people quit EVE. The highsec community doesn't benefit from packing in as many people as possible. I'm in favor of quality, not quantity. We'd be better off with a handful of really good highsec players than having hundreds of thousands of bot-aspirants who contribute nothing. In fact, I'd rather the servers be completely unpopulated than have a single bot-aspirant online, if that's the choice.

A few minutes later, Boliviani set another EVEmail to Agent Galaxy Pig. She was still feeling sorry for herself and her lack of money. Pop quiz, hotshot: Was Boliviani really a helpless noob who was driven to quit EVE after losing everything from a gank?

Apparently not. A few hours later, Boliviani plunked down a 430 million isk bounty on Galaxy Pig. Then she put down hundreds of millions more on Galaxy Chicken, the other ganker who had assisted on the kills.

Galaxy Pig rightly called Boliviani out on her lies. If she'd been broke, where did she get the bounty money from?

In any event, Boliviani declared that she was broke for real now, having spent the last of her money on bounties. And she was quitting EVE. 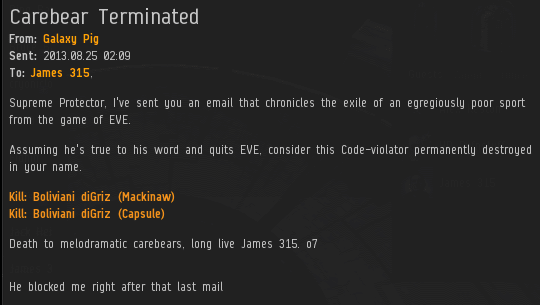 ...and that was the last anyone heard of Boliviani diGriz. Perhaps we're turning a corner. The longer the New Order sticks around, the more carebears will realize that our Code isn't going anywhere. This is how highsec is now. If you don't like it, mine in lowsec. If you're too cowardly to do that, don't assume anyone's going to care if you quit.
Posted by MinerBumping at 18:49