The Agents of the New Order care deeply about highsec. Nothing escapes our notice--not even the smallest detail. 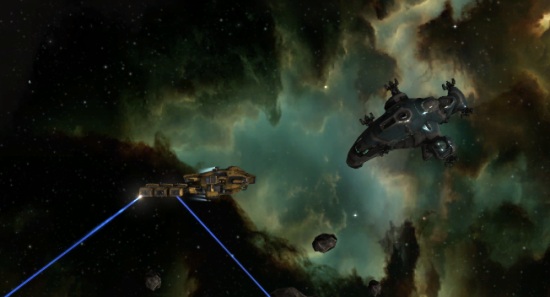 Agent Lenda Shinhwa was performing a routine inspection of Balle, a system in the Sinq Laison region. He noticed a Celestis-class cruiser sitting next to a miner in an asteroid belt. Lenda was curious about this, so he decided to investigate. 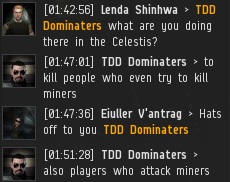 The Celestis pilot, TDD Dominaters, didn't take much prompting before he delivered a full confession of his counter-revolutionary intent. He planned to counter-gank gankers by using sensor dampeners.

With confession in hand, Lenda reported this news to the CEO of Bad Touches corporation. Within five minutes, Bad Touches declared war against TDD's corp. That's the power of the highsec community working together as one. 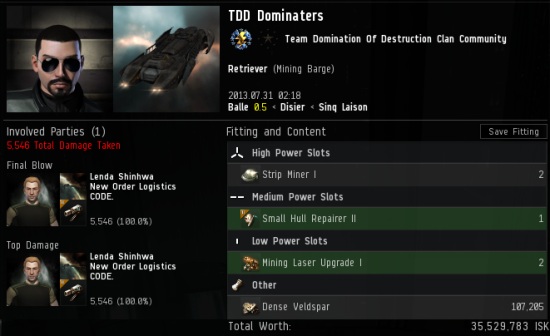 When TDD received notification of the wardec, he went back to station and traded in his Celestis for a Retriever. Why? Because he wanted to get some mining time in before the wardec took effect. So Lenda killed him. It's incidents like this that give the New Order its reputation for efficiency. TDD had gone from bragging about stopping ganks, to being a gank victim himself, in less than an hour. 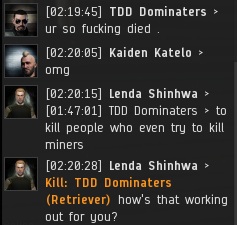 As TDD raged in local, Lenda softly reminded him of his boasts and encouraged him to become a better person. 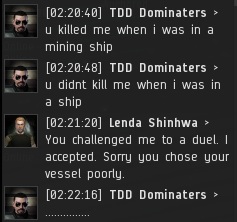 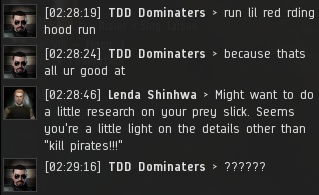 Despite all evidence to the contrary, TDD was confident that he would win in any future battles with Lenda. Lenda suggested he educate himself. 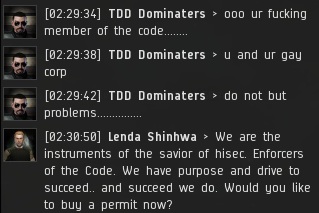 It was then that TDD realized that Lenda was an Agent of the infamous New Order of Highsec. Would he relent? 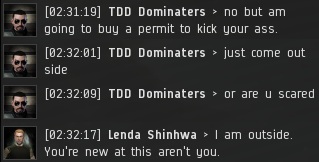 Instead of offering an apology, TDD raged more in local, and demanded that Lenda leave the station. But Lenda wasn't actually docked in the station.

TDD was still deeply ensconced in his own reality, and demanded Lenda undock. Meanwhile, Lenda was sitting comfortably at a POS. 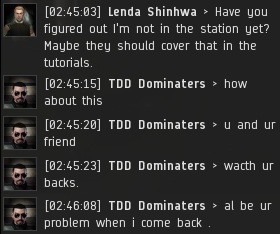 Eventually, TDD recognized that he wouldn't find satisfaction at the station. He vowed revenge against Lenda and all his friends. Would he get it, or would he just embarrass himself again?

To be continued...
Posted by MinerBumping at 22:33