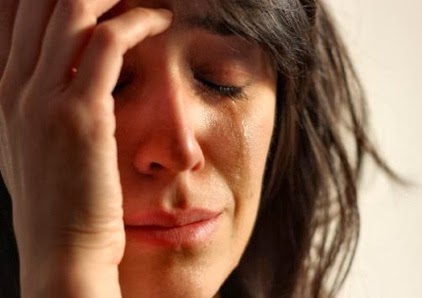 You all know about the meme called "first world problems". What you might not know is that highsec dwellers also have certain kinds of problems that only afflict them. If you live in lowsec, nullsec, or wormsec, you won't face such things.

Above is a selection from a recent Highsec Miner Grab Bag item. TheSmokingHertog didn't think he should face any consequences for sleeping while mining. After all, everyone has to sleep--that's life. Except it's not life for pilots in lowsec, nullsec, and wormsec, apparently none of whom sleep. When was the last time someone on TeamSpeak told everyone to keep it down during a fleet battle so he could catch a few Z's?

I suppose we're supposed to feel compassion for the 79 year-old miners who can't be bothered to keep their meds within reach of their keyboards. Not a problem--everyone who knows me will tell you that I'm overflowing with compassion. The funny thing is, there aren't any 79 year-olds with meds who live in nullsec. They only live in highsec.

Another opportunity for compassion: Tinhorne Greenley's friend is in the hospital and had a stroke. Naturally, Tinhorne had to go AFK for a moment. The story is as sad as it is unverifiable. I might tell Tinhorne that if he were a true friend, he would be visiting the guy in the hospital rather than "playing" EVE by mining all day--but it's not my business to tell people how they run their lives outside of EVE. Only inside of it.

Still, isn't it fascinating that no one has ever lost a nullsec battle due to their scouts or FCs going AFK to take calls from stroke victims? Nullsec players' friends are all in perfect health. I guess if someone wants to live a long life, they should tell their friends to play EVE in nullsec. Not highsec, or else they'll befall one disaster after another.

Mal Hendar had to eat a sandwich. Everyone's gotta eat. Except outside of highsec, where no one dies while they're enjoying a meal.

If you want to save yourself 600 million isk, keep a phone by your computer. Or you can live in nullsec, where no one receives phone calls. Don't believe me? When was the last time someone lost a Nyx because of an ill-timed phone call?

Highsec miners have the worst timing. How long do you suppose it takes to get up and grab a beer? Long enough so that our Agents will just happen to kill you while you're AFK. Then again, maybe "AFK getting a beer" means he was at a bar across town.

Highsec isn't for multi-taskers. Flapwazzle en Daire was too distracted to keep his eye on the game while mining. And what activity so fatally occupied his attention? Listening to music. Good thing EVE doesn't have sound, or people would be dropping like flies.

Another miner complained that he was too busy watching TV to pay attention to the video game he was supposedly playing. Any nullsec fleet PvP'er worth his salt will tell you that spending hours in laggy ti-di conditions can be tedious, too. Yet they remain at their keyboards. 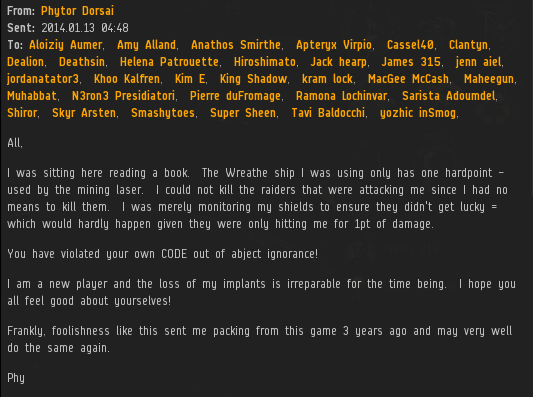 Phytor Dorsai threatens to quit EVE. That would be a real shame, because the EVE community would miss out on a guy who was "sitting here reading a book". Friend, if you want to read a book, go to the library, not highsec.

As a side note, I like how he claims to be a "new player" and then admits he was playing EVE three years ago. 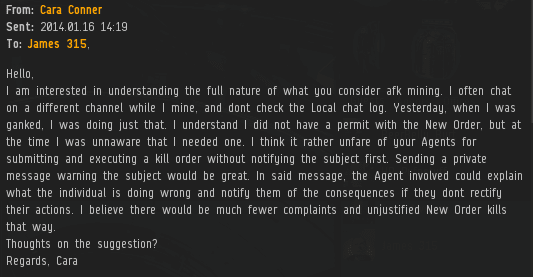 More highsec problems: Cara Conner was too distracted by her other chat channels to keep her ship safe. In nullsec, pilots are often expected to keep track of multiple channels. Yet they don't die while reading them. Highsec miner channels must be scintillating! 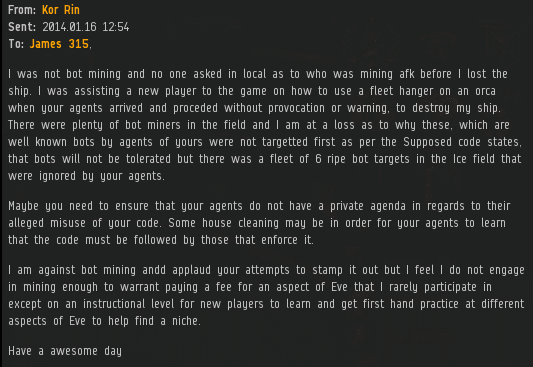 Kor Rin died because she's so selfless that she spends all her time helping new players. Physician, heal thyself. It seems Kor's the one who needs help playing properly. Large organizations like GoonSwarm, TEST, and Brave Newbies have helped tens of thousands of new players learn EVE. Miraculously, their instructors manage to deliver instruction and pay attention to what their own ship is doing.

If you ask me, the real highsec problem is that highsec carebears love to make excuses. Now let's see what an unintentionally honest carebear has to say for herself:

Ashawntie Mamari could have called herself an industrialist. She could call herself a miner. Instead, she describes her career as "miner who make there living by mining AFK". That's the truth. AFK mining is the bot-aspirant's career. Going AFK is not something that happens due to an accident or an emergency. Going AFK is not incidental to their career--it is their career. They want to be paid spacebucks for not playing the game. And they feel entitled to it because they happen to live in highsec.

It's the perfect crime, except for one thing: Highsec has a Code now, and a whole 'lotta people willing to enforce it. If you want to mine AFK, go to lowsec and see where your all your tears and excuses get you.
Posted by MinerBumping at 18:28