The New Order has the most powerful and well-connected intelligence service in highsec. It's easy to understand why: The ideological appeal of the New Order and its Code allows us to recruit intelligence assets from all across EVE, regardless of players' formal affiliations. In other words, we have eyes and ears everywhere. This shouldn't be cause for concern, as long as you aren't doing anything wrong. As Google's former CEO famously put it, "If you have something that you don't want anyone to know, maybe you shouldn't be doing it in the first place."

I couldn't agree more, at least as far as that quote applies to highsec miners and other carebears. Actually, the New Order has more in common with Google than you might think. We share the same unofficial motto: "Don't Be Evil".

Today I present the latest prize obtained by the Perfect Awareness Reconnaissance and Actionable New Order Intelligence Agency (PARANOIA). It was easy to intercept this particular rebel communication, as it was being advertised repeatedly in local.

I've noticed that whenever someone says "make this go viral" or "this needs to go viral", it's something that isn't worth going viral. As a side note, you can tell the rebels aren't doing very well when they're resorting to chain EVEmails.

The EVEmail starts off well enough, though. It could have been sent by a ganker from the New Order: "We gankers are here to support and assist you. You don't need to be victimized by us. Please just follow the Code."

The EVEmail goes off the rails right about the point where it warns about "narcissistic sociopaths" who like to shoot spaceships in a spaceship-shooting video game. The solution? Join a channel.

I must confess, I am skeptical that an AFK miner will get much value from a channel. It's hard to watch a channel when you're AFK. Also, these are the same miners who can't be bothered to watch local, which is probably a more relevant channel. Among the protips is that a miner should set war targets to negative standings, because apparently they might miss them otherwise.

This portion of the EVEmail concludes with an urgent message, "The more people who are involved with this project, the more successful it will be!!" Thus, success is measured by how much they can spam a channel that warns AFK miners of war targets who might be in their system.

True safety only requires 10 million isk and obedience to the Code. But the rebels would have the miners "stay docked until they leave", costing them valuable mining time. Or they can spend more than 10 million isk on another mining ship. Or they can "get into a fighting ship". 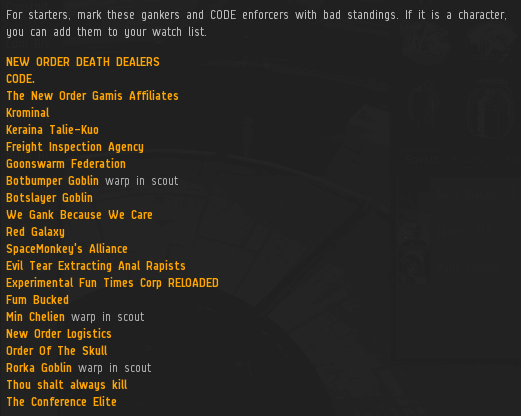 The list of dangerous gankers provides insight into the rebels' thinking, such as it is. It's pretty disorganized, including individual Agents like Krominal, as well as Goonswarm Federation, the largest alliance in EVE. Also worth mentioning is our old friend Gevlon Goblin's various "Goblin" alts. He disavowed the New Order several months ago, but continues to gank and give miners nightmares. I was surprised to see my 1-man bumping corp, Experimental Fun Times Corp RELOADED, on the list. They could have just put James 315 on the list, since I'm the only member of the corp, and since the corp could fold and be re-opened at any time.

So who was the guy forwarding this EVEmail, anyway? 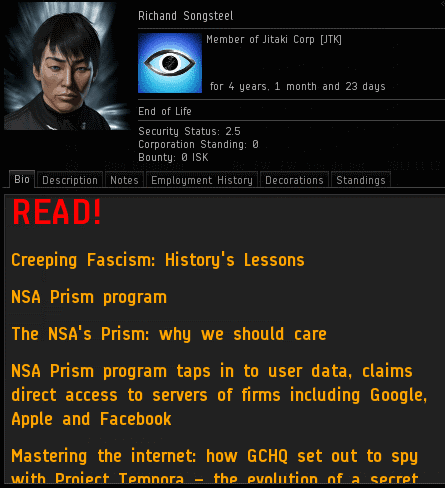 Yeah. This guy was definitely struck by PARANOIA. 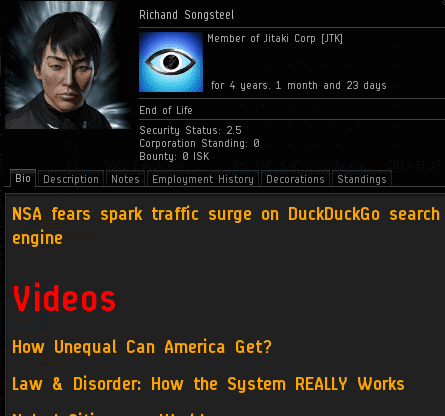 ...and the bio goes on and on. If he wishes to promote these things, that is his right. Nevertheless, I must protest his "Law & Disorder: How the System REALLY Works" link. When it comes to highsec, it's all about the Code and Order, with gankers and bumpers helping miners despite the miners' flaws. That's how the system really works.
Posted by MinerBumping at 19:26