Every miner has an excuse for AFK mining. Sometimes they're mundane excuses, like "I was in the bathroom" or "I was asleep" or "I was putting my child to bed." Other carebears offer more exotic reasons, such as "I was helping my neighbor fix his plumbing" or "My blood sugar's getting low and I could go into a diabetic coma."

(Long-time readers of MinerBumping know, sadly, that I'm not making these excuses up; carebears have field-tested all of them.) 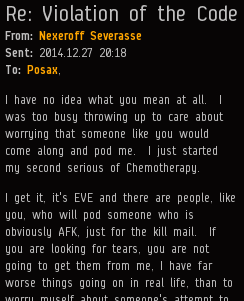 It's interesting to consider that these real-life reasons for leaving the keyboard only affect players in highsec. You've never heard of someone losing a nullsec fleet battle because their fleet commander had a real-life emergency. Life only interferes with highsec dwellers, it seems.

Lately, as the New Order has tightened its control over more and more systems, the carebears have grown increasingly creative. Aaron Dontera, for instance, explained that he uses autopilot and goes AFK without a permit because he only has one hand. If any readers can follow that logic, let me know. 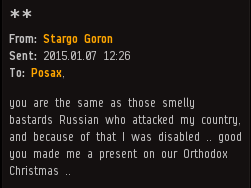 In some cases, the invasion of one's country might lead directly to AFK mining. To the carebear, all roads lead to bot-aspirancy. 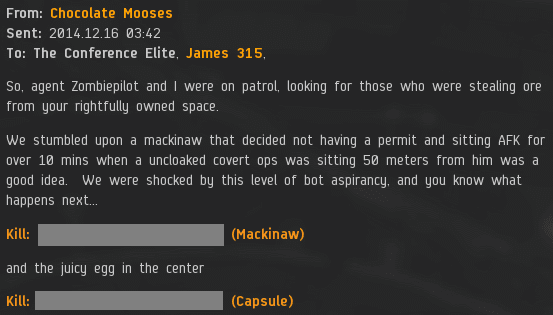 Agent Chocolate Mooses sent me a report about one of the most baffling excuses for AFK mining I've yet seen. The name of the miner in question has been withheld, for reasons which will become clear in a moment.

Everything started out fine, at first. The miner even congratulated our Agents on their gank, as the Code requires. But something was different about this miner. For some reason, he was very confident that he would be reimbursed for his Mackinaw loss.

The reimbursement petition was appealed to the CEO of The Conference Elite, a fine young gentleman and PvP legend, Agent loyalanon. He would set things right.

Suddenly, the miner revealed the justification for his reimbursement request. Our Agents were caught off-guard, to say the least.


xxxxxxxxxxxxxxx > actually you can search google
loyalanon > can you link me something
xxxxxxxxxxxxxxx > http://obits.dignitymemorial.com/dignity-memorial/obituary.aspx?n= [remainder of URL omitted]
Chocolate Mooses > I'm so sorry to hear about your RL loss, Shev :(
loyalanon > So what does your character name have to do with us?
xxxxxxxxxxxxxxx > well anyone that pods her i always ask first before excalateing

The miner linked an online obituary. Sure enough, the deceased individual had the same first, middle, and last name as the miner's character name, and had passed away about three years earlier.

In a bizarre twist, the miner believed that the character name of his Mackinaw pilot entitled him to absolute immunity from suicide ganks in highsec.

If the ganker's corp, The Conference Elite, did not reimburse the miner, he threatened to escalate things. But how?

The miner served up another startling revelation: Though he'd spent at least the last three years mining in highsec, he was actually a PvP'er himself. If he did not get satisfaction, he would kill one hundred New Order vessels, for a total loss of approximately 5 billion isk. (The average gank Catalyst costs 50 million isk, apparently.)

Our Agents, having much experience with such threats, advised the miner to buy a permit instead. But the miner was too confident in his combat abilities.

In a display of typical New Order honesty and integrity, loyalanon reminded the miner that he'd also lost a pod worth around half a billion isk. The miner repaid this kindness by increasing the size of his threat. He also admitted that he was multiboxing miners. He didn't say if they were all immune from ganking, though.

Eager to get at least the majority of his money back, the miner lowered his offer from 700 million to 500 million isk. Either the money would be paid, or he would exact 8 billion isk worth of revenge. As always, the miner--despite his earlier fixation on character names--focused everything on money money money, isk isk isk.

Then came a countdown timer. Unlike previous countdown timers from existential highsec threats like Mine Teck, this one ticked down in real time. Our Agents had to scramble to find the cash.

In fact, our Agents were stalling for time, just like every single person who ever was told to pay a ransom.

Having failed to pay the ransom, our Agents had no choice but to prepare themselves for war. This is what highsec honour requires. And as we wait for the miner to launch his campaign of destruction against the New Order, I'd like to remind everyone of the following:

New Order mining permits are good for one year, they're valid in all highsec systems, and they cost only 10 million isk--just as they always have. If anyone has a legitimate reason for not purchasing one, I've yet to hear it.
Posted by MinerBumping at 19:12