The True Family of Highsec, Part 4

Previously, on MinerBumping... Jaroth Kings' angry outburst, directed against ganker Liek DarZ, sparked a major diplomatic crisis. Agent Liek called upon Jaroth's CEO, wabbitrage, to either extract a public apology from Jaroth or expel him from the corp. But matters were complicated by the fact that Jaroth was wabbitrage's real-life cousin. wabbitrage felt his other corpmates, many of whom were also his relatives, wouldn't understand. Tensions escalated when Agent karma balancer suddenly appeared and demanded action.

War became increasingly likely. wabbitrage knew it could spell the end of his corp's existence, but at least he wouldn't need to take sides against his family.

In this situation, karma is what is known as a "heavy".

Click for full-size version
Liek understood wabbitrage's dilemma: He was torn between his real-life family and the New Order family. The time comes in every highsec CEO's life when he must make a principled decision. I.e., one in favor of the Code.

In a last-ditch bid to prevent a ruinous wardec, wabbitrage offered to guarantee the Code-compliance of everyone in his corp. He'd buy additional mining permits, even for those members who didn't reside in highsec.

Our Agents are always happy to sell more permits. Yet the Jaroth problem remained. wabbitrage offered to pay Jaroth's Red Pen fee. An apology was still required, however.

Liek DarZ is, like all of our Agents, a problem-solver at heart. He came up with an intriguing solution: wabbitrage could kick his cousin out of the corporation and let him back in once he apologized. That would put all the onus on Jaroth. To hammer out the details, the two Agents and wabbitrage discussed the matter on TeamSpeak. Though tense at times, the conversation was a productive one.

wabbitrage agreed to buy permits for everyone, instruct them all to pledge allegiance to the Code in their bios, and put a Code-compliance statement in the corp's description. From now on, the corp would be for New Order loyalists only.

Liek received the payments and oversaw the changing of wabbitrage's corp's description. Now it was up to Jaroth to apologize.

wabbitrage felt an enormous sense of relief. His family members might not be thrilled by the direction things were going, but catastrophe had been averted.

wabbitrage's cousin was stripped of his roles so that he could be expelled from the corporation. Within a day, the corp would be cleansed. 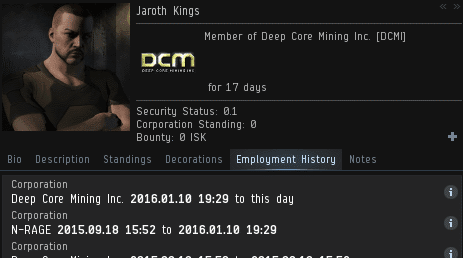 Unfortunately for Jaroth Kings, he never found it within his heart to apologize. Instead, he remained cut off from his family's corporation. It was a difficult situation for wabbitrage, but he knew he'd done the right thing. The Code is thicker than both blood and water. In truth, there is only one family in highsec--the New Order family. And its Father smiles upon all who comply with the Code.
Posted by MinerBumping at 17:06