Compliance with Every Provision of the Code

For a group of people who spend all day sitting in one spot, highsec miners love to duck, dodge, and weave when it comes to their responsibilities under the Code. If they don't have a permit, they complain that they weren't AFK. If they're AFK, they complain that they're new and weren't warned. If they're not new, they say to go bother nullsec miners, or bots, or mission-runners. And so on. 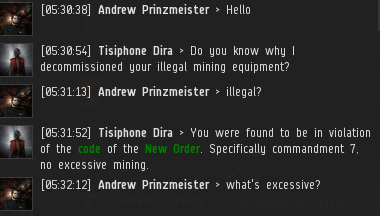 But Code compliance means that a miner is supposed to obey the entire Code--even if they'd prefer to pick and choose the provisions most convenient for them. 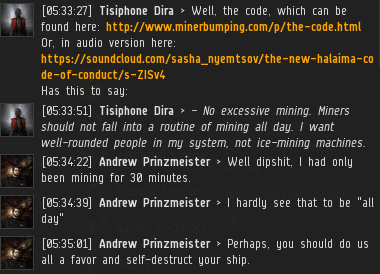 Miners are not permitted to mine excessively. The call is made by our fair and impartial Agents. You'd be amazed how good they are at ferreting out the Code violators. Consider Andrew Prinzmeister, whose violently anti-Code attitude and disrespect for our Agent (a violation of the Code on its own) was revealed with a single gank. 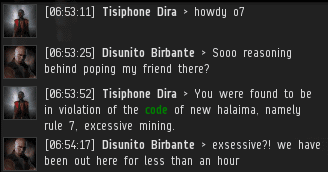 Of course, "excessive" mining may occur in one session, or it may be excessive when figured cumulatively. 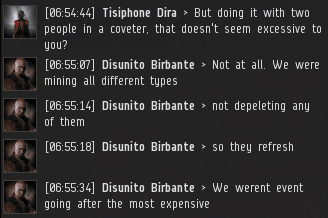 Other symptoms of bot-aspirancy can be the consequence of excessive mining. And, it must be pointed out, even a single unit of ore is excessive if mined without a permit.

The excessive mining provision is a controversial one. The intellectually incurious miner who lives in highsec and dares not venture outside his comfort zone may nevertheless be eager to debate our Agents' interpretation of "excessive".

In a debate between an Agent and a carebear--whether on the Code or any other subject--I know where I'd put my money.

Hypocritically, the highsec miner claims to be in favor of new players and higher subscription numbers. All while taking ore better left for newbies.

Code compliance must be total. It's hard to trust that a miner obeys one provision if he's so quick to disobey others.

For instance, if a miner responds to a gank with disrespect and insults, it's solid evidence that he was guilty from the moment our Agent entered local. This is true even if our Agent didn't perform an AFK check, etc. 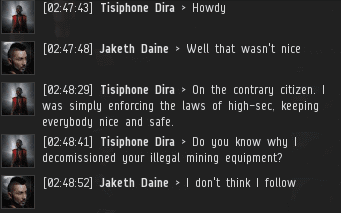 Jaketh Daine was ganked by Agent Tisiphone Dira. He was obviously guilty of something, but what?

Aha! He'd failed to offer a "gf" in local after being ganked. Impressively, Tisiphone knew this would happen even before ganking him. She performed a retroactive gank. 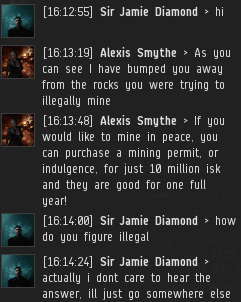 At least Sir Jamie Diamond was honest. As honest as a lying, thieving Code violator can be, that is. 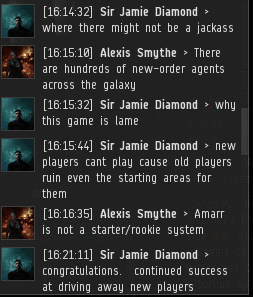 Rebels and skeptics clutch their pearls and accuse our Agents of "not following their own Code". It's an easily disproven claim. Consider: Even if we only count the CODE. alliance's kills, over 31 trillion isk worth of bot-aspirants have been destroyed. CODE. has over one hundred fifty thousand kills to its name. Where are all of the cases of Agents making mistakes? Supposing our Agents have a 95% accuracy rate, that would still leave many thousands of wrongly ganked carebears. So where are they?

Only one conclusion can be drawn from the evidence. Our Agents enforce the Code to perfection. The CODE always wins. Always.
Posted by MinerBumping at 17:41