It seems as though the anti-Code rebels are in a constant state of having just been defeated by the New Order.

It's common practice for rebels to issue threats against our Agents. They do this instead of PvP.

Because the rebels are perpetually vengeful yet always unable to actually get revenge, the best they can do is make promises of future PvP.

sethin darklight vowed to somehow find a way to destroy Agent Tisiphone Dira. His vendetta was out of proportion to his most recent loss, so Tisiphone searched for evidence of other losses in his past.

As expected, sethin had indeed suffered other defeats at the hands of New Order Agents.

The truth is, for many highsec Goofuses, EVE is nothing but a series of unwelcome encounters with CODE. No wonder they prefer to go AFK and play other games. Tisiphone waved good-bye as sethin went off to wherever it is that carebears go after being ganked. 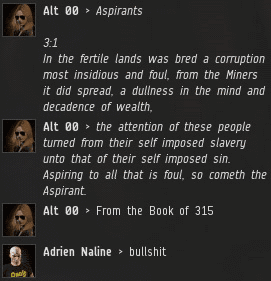 Meanwhile, Agent Alt 00 took a 15-minute break from ganking to teach some miners about the Code in Nakugard local. 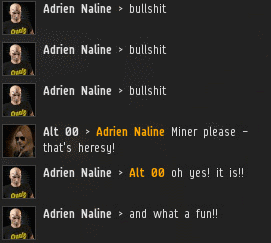 Adrien Naline disapproved of the lesson. There's one of these guys in every system.

Our Agents are very forgiving people. It's amazing how far an apology--a sincere apology--will get you in highsec. Would Adrien take the opportunity to make one? Or would he double down on his vulgar instincts? 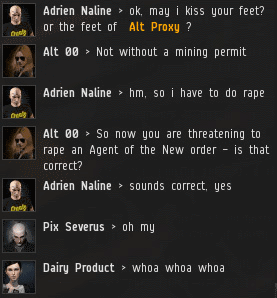 Even the Nakugard locals were horrified by Adrien. And trust me, Nakugard has seen a lot over the years. 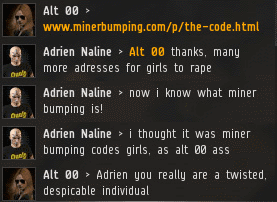 As we've discussed, rebels are always threatening to do wicked things. Although they can't make good on them, these threats are dangerous. Dangerous to the carebears who issue them, that is. For they can have unintended consequences. 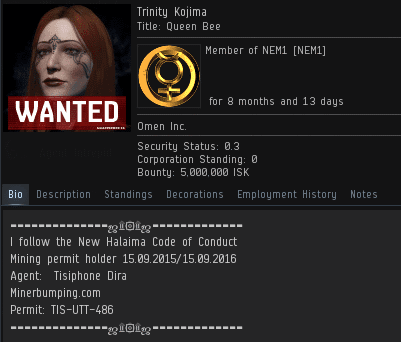 As it happened, Adrien's CEO owned a mining permit. It wasn't long before she heard about what her corp member had been up to in Nakugard. And she was not amused. 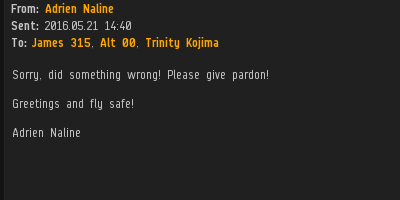 The mouthy miner was forced to offer an apology. He gritted his teeth and sent the EVEmail, but his apology was of dubious value. 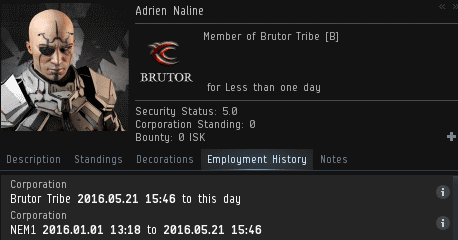 Adrien was no longer welcome in his own corp. As time goes on, more and more people believe that highsec can do better. Even if someone spends time engaged in highsec mining, it doesn't mean he must live a life of nonsense and nastiness. The culture is slowly but surely improving, and it's all thanks to the Code.
Posted by MinerBumping at 17:16