The New Order's achievements in the field of elite PvP are well known. Equally impressive are its achievements in the economic field: Over 1,200 individuals and entities have purchased over 1 trillion isk worth of shares in the New Order. Ours is the first truly democratic economy in EVE, built not by conquest or bot-aspirant PvE, but through volunteerism and civic pride.

Since 2012, our progress has been charted on a special thread in the Market Discussions subforum on the official EVE forums. The thread is a marvel, weighing in at more than 860 replies and 126,000 views!

Side note: That view count is especially impressive today, as the forums have become a mere shadow of what they once were. The ISD's over-moderation drove the posters away, forcing CCP to accept the EVE subreddit as a replacement. A subreddit, ironically enough, that CCP has no ability to moderate. The more ISD tightened their grip, the more posters slipped through their fingers. Truly a lesson for us all. End side note. 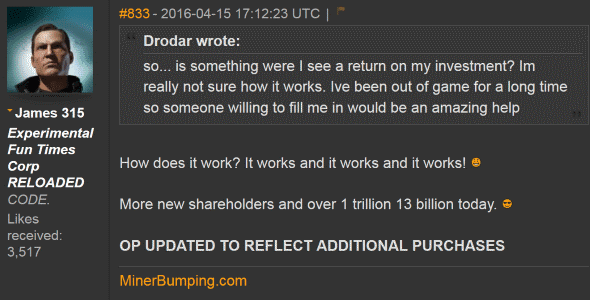 Over the years, our thread has been accepted as the crown jewel of the Market Discussions subforum. There are frequent updates, and the occasional investor question is answered. 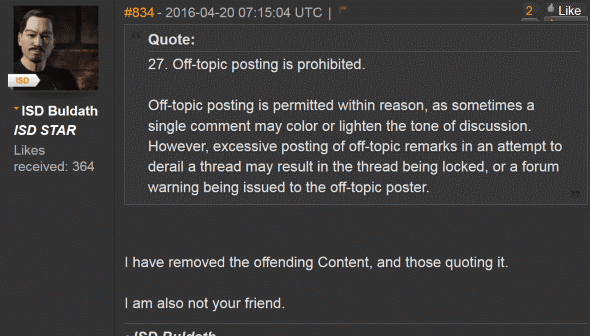 But one day, this blissful posting experience was interrupted by someone making off-topic comments. ISD Buldath purged the offending posts. But the mystery saboteur was already at work elsewhere in the subforum.

The man was named Fin Udan, and he had a bone to pick with the New Order. Having been repulsed from the New Order's stronghold, Fin opened up new threads from which to launch his attacks.

In the OP of Why is James315 in this forum?, Fin set forth the basis of his critique. Or not.

Eventually, Fin got around to repeating the complaints he'd originally made in the New Order thread. Basically, he felt the New Order's IPO was a front for criminal activity, and therefore not appropriate for the Market Discussions subforum. 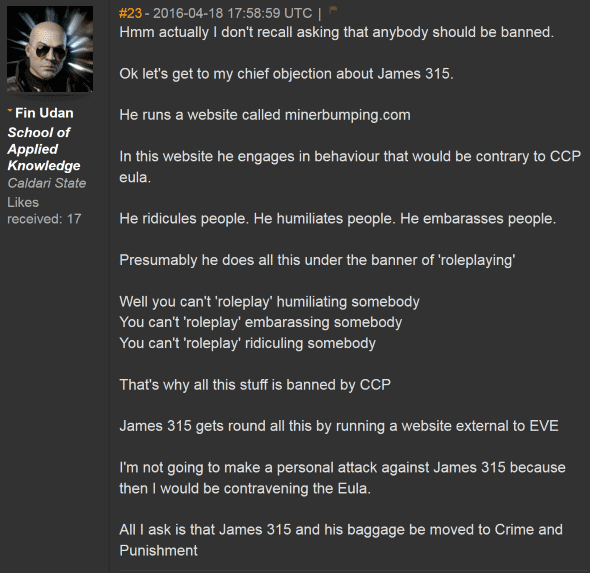 Fin explained that the New Order's activities are completely against the EULA. Even the content of MinerBumping itself is against the EULA! It's completely banned by CCP. Therefore, it belongs in the Crime & Punishment subforum...?

No one agreed with Fin. His own market history came under scrutiny. Fin fired back some insults until the thread was locked.

...Whereupon his second thread was opened.

Fin appealed to an odd combination of freedom of speech and censorship. His words fell upon deaf ears.

Disillusionment set in. Fin was disgusted by CCP's refusal to eliminate the New Order and/or move its content to Crime & Punishment.

Agent Ima Wreckyou rode in to the rescue. Since Fin Udan's censorship campaign had failed, why didn't he try investing in the New Order? If you can't beat 'em, join 'em.

Fin responded by opening new threads. Auspiciously titled "Praise James" and "Minerbumping.com", perhaps they reflected a change of heart. Maybe Fin was coming around. On the other hand, there was another, darker possibility: The beginnings of a full-blown forum freakout.