Previously, on MinerBumping... Agent ST0NER SMURF and other valiant warriors of Vrix Nation corp scoured highsec for bot-aspirant pods. They found many. The pod owners, despite having suffered the consequences of a pre-Code lifestyle, nevertheless rejected the Code when it was presented to them.

Fancy Pants McSparkles was greatly annoyed at the loss of her Capsule. She claimed to have only been playing a week--actually 11 days--as though it takes longer than a few moments to learn how to warp safely in a pod.

An hour later, Fancy abandoned the Internet Tough Guy approach in favor of whining to CCP. Fancy's death had taken place in a 0.8 security system and she'd long since put the EVE tutorial missions behind her, but I suppose she decided to let CCP sort out all of those pesky facts on their own.

Carebear philosophy is filled with internal contradictions. They feel that ganking in highsec lacks skill, but they also think warping manually in highsec is too much to ask.

Razer Dethrezzer joined Fancy in the "frivolous petition" club. It's unfortunate that the GMs are forced to deal with all of this nonsense, but at least they can enjoy carebear tears while at work.

Not all carebears use tortured logic to justify themselves--many drop an F-bomb and leave it at that.

Woe to the miner who doesn't think things through! dorkly vdv told our Agent to "eat shit" and then threatened to eat his "stomack" for breakfast. If this took place, dorkly would end up eating our Agent's shit--as a consequence of his own bad advice!

Carebears accuse our Agents of "making up" laws and rules, as if those things are supposed to be plucked from trees instead. Nevertheless, there is some truth to the idea that the Code is merely derived from natural law.

It's funny how bot-aspirants say they should be left alone simply because they haven't yet fully realized their ambitions to become bots. It would be like an aspiring serial killer telling the police to go away until after he's murdered more than one person.

Aurelia the Warleader's question comes up a lot, but only a small percentage of carebears are actually interested in hearing the answer. Aurelia wasn't one of them. 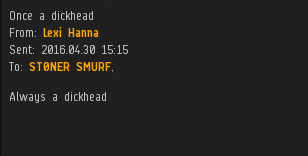 A request to future authors of tearmails: If you're going to rely upon the subject line of your EVEmail (which is not preferred), at least use an ellipsis.

Contrary to the claims of anonymous forum/comment/Reddit carebears who brag about never encountering us, the the New Order is everywhere. We cannot be escaped; our Agents never give up. With each encounter, a carebear becomes more and more willing to obey the Code. Hallanel wasn't there yet, but he'd learned to respect our Agent. A journey is merely a long series of steps in the right direction.
Posted by MinerBumping at 18:11