The New Order is constantly expanding. Each and every day, new Agents rally to our cause. They are quickly trained in the art of elite PvP. Agent Alt 00 took Alt Proxy under her wing. Before long, they were winning extraordinary victories in the name of the Code. 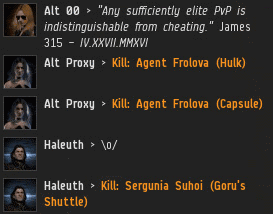 In a decisive engagement with an enemy Hulk, our Agents defeated the misleadingly named Agent Frolova. What kind of person pilots a Hulk these days? Our brave Code enforcers were about to find out. Frolova was notified that the New Order had already annexed all of highsec years ago. She greeted the news with trepidation.

Frolova issued a series of demands. Apparently she wanted to arrange a battle with our Agents, despite having already lost one. 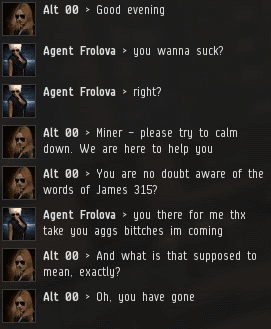 Next, Frolova initiated a hit-and-run convo.

Maybe Frolova should've stayed in contact with Alt 00 a little longer. She lost track of our Agent and had to send another EVEmail upon realizing her mistake. 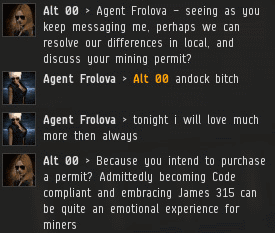 The New Order has championed the cause of transparency. There would be no more back-channel convos or EVEmails between Alt 00 and Frolova. Their dispute would be resolved in Aufay local. 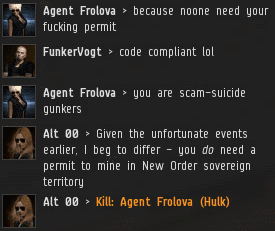 For someone who had just lost a quarter-billion isk ship, Frolova was awfully squeamish about the 10 million isk mining permit fee. Buying a permit has always been cheaper than not buying one. 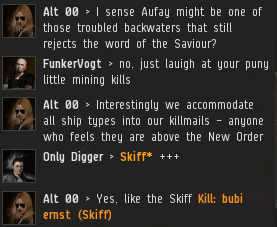 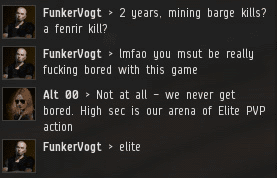 The rebels and skeptics tried to undermine the legitimacy of Alt 00's killboard. They failed. Alt 00 had statistics on her side (greater than 99% efficiency!). The rebels resorted to arguing "those kills don't count because reasons." 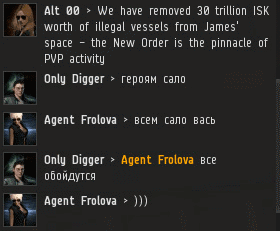 Our Agent proudly declared the objective, API-verified truth. The rebel miners could only chatter incoherently amongst themselves in reply. 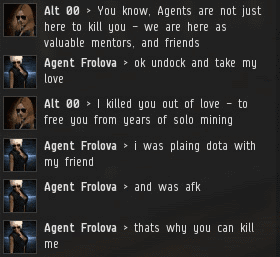 As I've always said, just give the miner an opportunity and he'll happily confess his crimes. 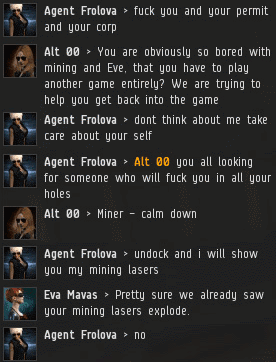 Alt 00 only wanted to help Frolova experience the game (that is, this game, not DotA). Frolova didn't want help--which is precisely why an intervention had to be arranged. Miners who don't want help rarely seek it. 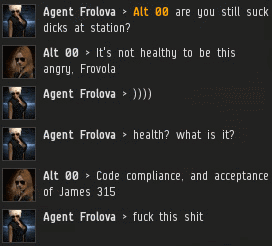 Rebels and skeptics in local grew quiet as they watched Frolova. Even they couldn't bring themselves to cheer her on anymore.

Alt 00 moved to another system to help more miners. Frolova followed her. She didn't have a new mining ship yet, but she threatened to resume mining eventually. Frolova was no newbie; she has been playing EVE for more than 9 years. But in all that time, she never truly played EVE until Alt 00 and Alt Proxy showed up. Maybe that--and not some silly promise of retaliation--was why Frolova followed them. And so it was that highsec took one small step closer to total compliance.
Posted by MinerBumping at 17:50