Not Too New to Know Things That Aren't True

Last week, we had an important conversation about the Code and the players who are "too new" to know about it. Let's take a look at some practical examples of Agents dealing with newbies. 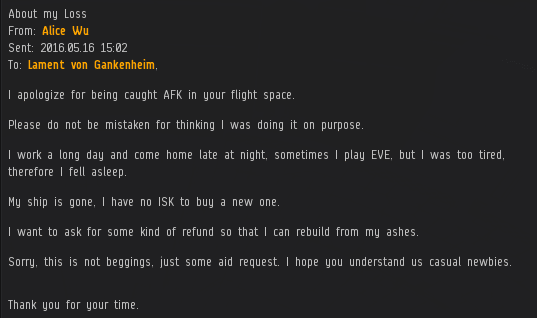 Agent Lament von Gankenheim received a desperate plea from Alice Wu, who had been wiped out by the loss of her ship. Alice didn't pretend to be unaware of the Code; she was simply too exhausted to obey it. Nor did she attempt to shift the blame onto the Agents who had ganked her. None of that "you're not following your own Code" nonsense. Lament rewarded her. Not with isk, which Alice didn't really need, but with a standing invitation to join the New Order and enforce the Code.

Now for a more typical case of a newbie who lost everything. How should Agent Aaaarrgg handle Sepultra Redmist's cry for help? Aaaarrgg and a small group of Agents destroyed Sepultra's fail-fit Procurer. Although CCP buffed the EHP of Skiffs and Procurers almost the point of absurdity, Sepultra managed to pilot one with less than 20,000 hitpoints. Even more damning, Sepultra's pod warped back to the station but remained outside for 18 minutes before our heroes removed it.

Sepultra's first EVEmail was intended to elicit, if not reimbursement isk, then at least pity. He could only keep up the act for a few minutes before sending another EVEmail. This time he called Aaaarrgg and his fellow Agents "idiots" and falsely accused them of violating the Code. Curiously, the accusation was based on the exact same misinterpretation of the Code that we see from miners all over highsec.

I'm not sure why so many carebears believe that our Agents are required to do an AFK check before ganking them. I've read the Code many times and have never seen that provision in there. (An ironic twist: The same carebears who manage to find that apparently well-hidden provision always manage to gloss over the part about buying a mining permit.)

Sepultra's attitude problem was readily apparent. If he was as new to EVE as he claimed, Sepultra was certainly quick to ascend the learning curve on how to become a Goofus.

Aaaarrgg helped the miner out by reminding him of his obligations under the Code. As an Agent of the New Order, Aaaarrgg knew the actual Code provisions, not the ones that miners make up for themselves. Carebears, I can't urge you enough to contact an Agent if you need help with Code interpretation.

Again, Sepultra accused our Agent of violating the Code, despite being unable to identify any provision that Aaaarrgg violated. Although miners are instructed to read the Code regularly, and although they're expected to follow it, miners get into trouble when they start telling others how to follow it. For some reason, that often results in heretical doctrines being propounded. Miners, focus on being obedient. Leave the leadership to our Agents.

Our Agent spoke frankly to the allegedly young miner. Would Sepultra admit his guilt, or would he come up with more excuses to explain away his bot-aspirant behavior?

In seeking to deny his crimes, the miner condemned himself instead. He admitted that he'd bought a ship he couldn't afford to lose. While claiming not to be AFK, he admitted that he was "talking to a mate" and, later, "out for a smoke" when he should've been concentrating on the game. Astonishingly, Sepultra declared his intention not to read EVE-related websites... apparently including MinerBumping!

Aaaarrgg tested the miner by offering to help him join the New Order, but Sepultra gave him a bit of the "I might've, but I won't" treatment. He was too happy with the corpmates he already had. The same corpmates who didn't give the newbie any isk or good advice. 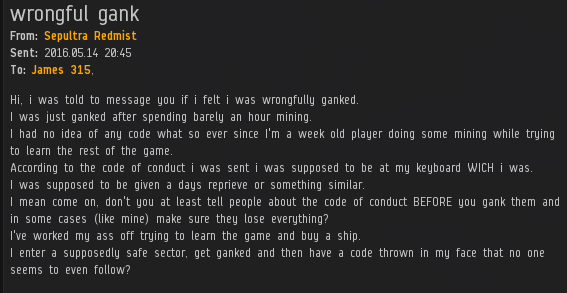 Sepultra decided to compose an EVEmail to the Saviour of Highsec. More crimes followed. Unless he'd brought his keyboard with him when he went outside to smoke, Sepultra most certainly was AFK. Even worse than lying to the Saviour, the miner claimed, "No one seems to follow the Code." That's a slander on all highsec--and quite a leap for a new player to make after supposedly encountering the Code for the first time. 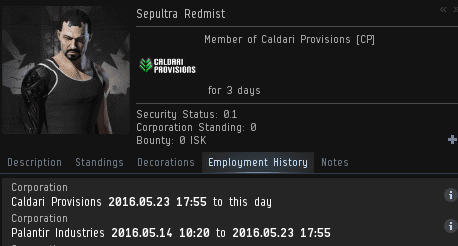 Despite claiming that he loved his new corp--too much to consider joining CODE.(!)--Sepultra soon left. Somehow I get the feeling that this miner wasn't much of a team player.
Posted by MinerBumping at 17:49