My Rocket to Destroy the Whole World, Part 1

As the highsec saying goes, "When the Cat's away, the miners will AFK." Unfortunately for the bot-aspirant miner, if you're AFK, you can't tell when a Catalyst is inbound. 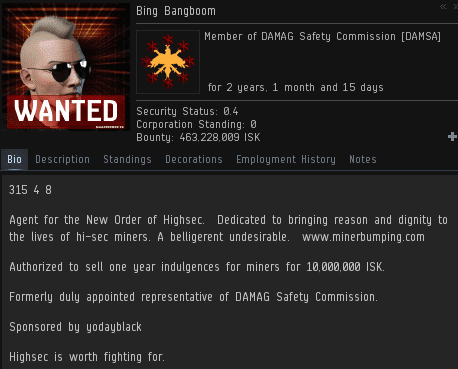 Some Agents of the New Order have such a presence that the mere appearance of their name in local is enough to stimulate compliance. And if not compliance, then at least fear or some other kind of activity. Bing Bangboom is one of those Agents.


Bing Bangboom > Yes, any highsec system is covered by a permit
Bing Bangboom > great value... for any of you economists.
ComedianII > Why it would be silly to lose a ship to save only 10M
Zed Lander > The price for a permit is 10mil, but the cost is far higher

When Bing enters local, the system springs to life, reacting as though a rock star has walked onto the stage.

And when Bing's not around, the locals talk about him. Unless talking or thinking about or reacting to Agents of the New Order, a highsec system is generally dead. In a very real way, the Code keeps EVE alive.


EVE System > Channel changed to Local : Erenta
Spine Ripper > no mining without a permit
Rfotq NoName > Have any shit to ask permission not necessary - fuck you

Bing Bangboom moved to the Erenta system and scanned for rebel miners. He spotted a small flock of them, consisting of Rfotq NoName and his alts. Bing's own ganker alt, Spine Ripper, didn't even need to land on grid. NoName's mining fleet preemptively evacuated the asteroid belt and docked up. It was a tremendous victory for the New Order, and it didn't even require a shot to be fired. NoName cursed his rotten luck.

Bing gave NoName the benefit of the doubt by assuming the miner's broken English indicated he wasn't a native speaker. Based on NoName's profile and his own knowledge of the Erenta neighborhood, Bing concluded that the miner would benefit from a Russian translation of the Code.


Rfotq NoName > I already told you where to go - fuck you . Rules write only for myself , but I am a free man
Rfotq NoName > Who is he that would write rules for all? He's a nobody! and his name is not as - so fuck you
Bing Bangboom > I can't help but notice that you aren't mining.
Rfotq NoName > in plain language explain to me what your rules are not needed?
Bing Bangboom > I provided it to you in Russian... have you read it?

Our Agent stretched out the hand of friendship. Now it was time for NoName to do likewise, by paying Bing 10 million isk.

Unfortunately, we don't yet have a Finno-Ugric translation of the Code. Maybe NoName could have paid for a permit, joined the Order, and written one for us. Then he could've helped himself and his fellow Finno-Ugrics. But NoName chose to be an angry, docked-up Goofus instead. What a missed opportunity for everyone.

Highsec miners are bad at PvP. They only know how to shoot two things: Asteroids and the messenger.

NoName's mining fleet was cooling its heels in the station, but NoName's temper was only heating up.

Bing's Finno-Ugric was a little rusty, but he was pretty sure NoName was committing more Code violations.

Highsec miners have a language all their own. NoName was pulling the "only CCP can make rules for the game" card. Though if NoName made good on his promise to visit Bing's house, I doubt the visit would be a EULA-compliant one.

You see that last line? That's not a thing that a miner says before buying a permit. Things were getting dangerously out of control.

NoName demanded that Bing leave Erenta. Bing refused. Now both sides were entrenched, and neither showed any signs of backing down. (Aside from NoName's fleet docking up when Bing entered local, that is.)