Although our Agents are perhaps best known for winning massive, cataclysmic victories, the day-to-day business of saving highsec can be compared to a relay race: A series of small victories won in succession by Agents who enable other Agents to build upon their progress. 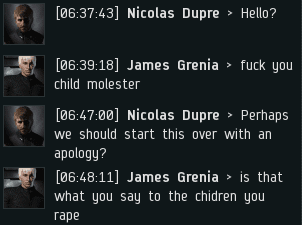 Consider Agent Nicolas Dupre's encounter with James Grenia, which was recorded in Highsec Miner Grab Bag #99. Nicolas had just ganked Grenia's 570 million isk Retriever. Instead of a "gf", Nicolas was treated to accusations of child rape.

Months later, Grenia unexpectedly met up with yet another of our Agents, Zeke N Destroy. The occasion for their meeting was some superb PvP where Zeke's Catalyst decisively defeated Grenia's 110 million isk Covetor.

At first, it seemed as though Grenia hadn't learned much from his earlier encounter with the New Order; he was still talking about child molestation. But at least he wasn't flying half-billion isk Retrievers anymore.

Grenia didn't pretend to be ignorant of the Code. He knew about it--he just didn't believe in it.

There's an interesting contrast to be drawn here between Agents and bot-aspirants. Our Agents are expertly trained, and over time they only get better and better at winning debates with the carebears they gank. Miners like Grenia, on the other hand, make the same losing arguments to multiple Agents.

Grenia had no faith whatsoever in the ability of the Code to keep his ship safe. He should've given it a try--whatever he was doing clearly wasn't working.

Often, highsec miners will say they simply want to be left alone. Not Grenia. He was very interested in meeting our Agent.

Zeke helped pull Grenia from the edge of the cliff. The Code states, "They ask what I am 'saving' them from. I save the miners from themselves." There's really an answer for everything in there.


Zeke N Destroy > Still waiting on my 10 million ISK. If you could comply with the CODE we can get past this ugliness.
James Grenia > fuck off
James Grenia > you get nothing
James Grenia > i just lost everything so dream on little boy

Finally, Grenia confessed that his 110 million isk Covetor contained all that he owned. Since barges can be used to make money (albeit very slowly), he must've been ganked immediately after purchasing it. Or, more likely, he was lying like a typical bot-aspirant.

Despite Grenia's conduct, he, like most highsec miners, claimed the moral high ground.

Agent Zeke gave Grenia the benefit of the doubt by assuming the miner had called his own actions wrong and stupid.

Even a small amount of progress is progress. Zeke managed to engage the miner in a conversation which, for literally minutes at a time, had nothing to do with child molestation. Thanks to Zeke's hard work, the next Agent to gank Grenia will have an easier time selling him a permit. The baton is passed again.
Posted by MinerBumping at 17:43