The Universal Appeal of the Code

Alliance-based killboards and other tools related to in-game mechanics make it simpler to follow what's going on in EVE. Simplification doesn't always go hand-in-hand with accuracy, however. Some things, like the Code, transcend game mechanics. Rebels and skeptics think they can avoid the influence of the New Order by setting CODE. to red or indulging in absurd fantasies of a CODE. break-up. Not so. The Code has an appeal that goes beyond corporations, alliances, factions, and coalitions. 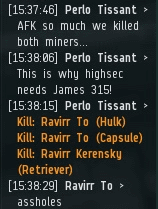 A group of nice young Goons from the Ministry of Love came across a pair of AFK miners. This sight instantly persuaded them that the Code was right all along. They destroyed the Hulk, its pod, and Hulk's alt's Retriever. 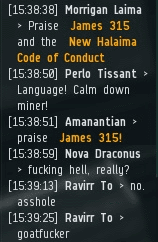 With the zeal of the newly converted, the Goons celebrated a victory that they knew had been made possible by the Code. Gank recipient Ravirr To called them "goatfuckers"; local rebel Nova Draconus was similarly skeptical of the Code. 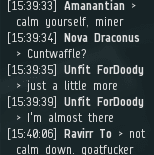 Ravirr was instructed to calm down, but he categorically refused. 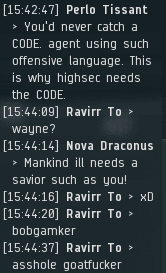 The longer the Goons remained in the system, the more they understood the depth of highsec's needs. Those accustomed to dwelling in nullsec are often shocked by the sorry state of the bot-aspirant miner. 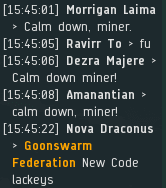 Highsec's problems, like those of the world, cannot be fixed in a single day. Even multiple Goons telling the miner to calm down didn't do the trick. Nova Draconus was disgusted by the sight of Goons enforcing the Code. 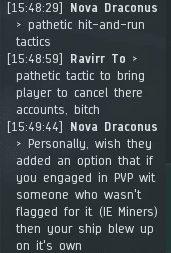 Nova and Ravirr discussed the threat posed by highsec ganking. They seemed ready to appeal for help from CCP, but it would've been easier for them to send a petition to me--with 10 million isk enclosed, of course.

Maximus Decimus Urelius's Retriever was destroyed by another group of Code enthusiasts from outside CODE. Hailing from The-Culture and Templis CALSF, the gankers encouraged Maximus to buy a permit. He, too, absolutely refused.

In addition to requesting 10 million isk, the gankers informed Maximus of his need to obey other provisions of the Code, such as offering the traditional "gf" or another sign of respect. Again, Maximus couldn't see the wisdom in it.

Nothing in this world can take the place of persistence. Even though talking to Maximus must have seemed like talking to a brick wall, he was actually getting closer to compliance with each EVEmail.

From "FUCK YOUR CODE. dont contact me again" to "i would like to request a mineing permit please" in less than an hour. Just imagine the opportunities Maximus would've missed, had the gankers taken him at his word and stopped pressing the issue. This is why the New Order--inside and outside of CODE.--will never give up on the Code. Highsec is worth fighting for.
Posted by MinerBumping at 18:52