Uh-oh, that can only mean one thing: Another edition of the Highsec Miner Grab Bag!

It's impressive: I've written hundreds of pages describing in fine detail my motives for founding the New Order. Yet the anti-Code rebels still engage in (inaccurate) speculation--as if our organization is a total mystery.

Sure thing. See the link to the Code at the top of the page. Now you're good to go. 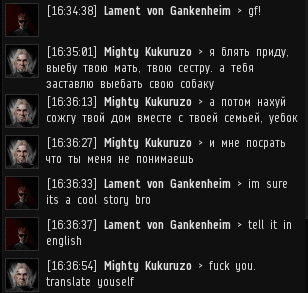 Mighty Kukuruzo clearly had an axe to grind of some sort. Now to find out what was going on... 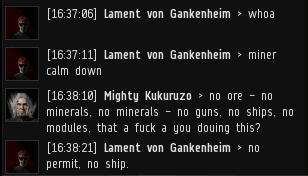 Lament von Gankenheim disposed of Mighty Kukuruzo's entire argument in only 11 seconds, minus lag. Our Agents are professionals. 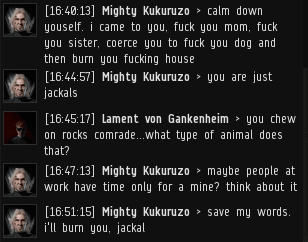 Caution: If you defeat a carebear in a debate, be prepared for rape and arson threats. Or, as Russian miners call it, "Plan B".

Agent FunTimesForYOu had an interesting encounter with Karne Audene, which he recounted on his own blog, Eve's Golden Path.


Karne Audene > Oh, I'm more then butt hurt. I'm mad enough to figure out where that asshole lives, and take it to him.
Karne Audene > You've either just started playing the game, or your one of Phule's alts just fucking with me again.
Melin Charon > aha...doxxing and real life threats.guess someone lost about some shitty space pixel
Karne Audene > Yup, its just space pixels.
Karne Audene > You guys want to harras folks while sinply mining. I'm doing my part to retaliate.

I've always been puzzled by the attitude of highsec miners. Why is shooting miners in 0.4 considered elite PvP, but doing the same thing in 0.5 is "harassment"?

Karne's wrong about no one wanting good fights. In fact, our Agents insist on them.

Speaking of demanding a good fight, Agent Semtex Attor wanted a "gf" in local--nothing more than he was owed. What does it take to get a carebear to show a little sportsmanship these days?

Denis Chartier warned that next time, our Agent would see his Phoenix dreadnought waiting for him in the asteroid belt. If only. Then the story would end with a Phoenix somehow getting CONCORDed.

Miners really do think it's "unfair" to kill them at all. So much for only wanting One More Nerf™. 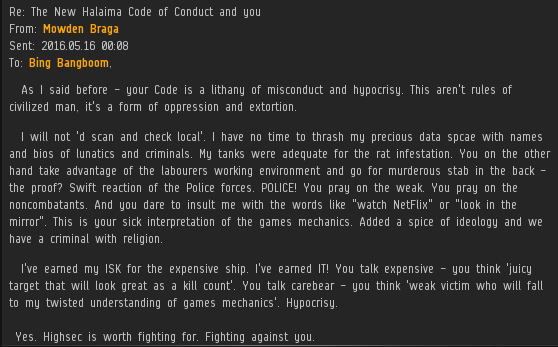 Going back to the topic of good fights, Agent Bing Bangboom politely requested the "gf" he'd earned. Mowden Braga tied himself in knots trying to come up with reasons not to deliver.

Persistence pays off. First the carebear will obey the Code because he knows he has no choice. Later, he'll obey it because he knows it's the right choice. That's what freedom looks like!
Posted by MinerBumping at 18:17