As we see with each Kills of the Week post, the consequences of bot-aspirancy can be costly. Code violators lose their ships and their cargo and their implants--sometimes everything they own. Can it get any worse? It can. Though carebears are often solitary creatures, many of them enjoy the comfort of being part of a larger corporation or alliance. But not everyone wants to be associated with a rebel.

All the way back in September 2012, we told the story of Hail Heaven, a rebel miner who stirred up trouble during the early days of the New Order. 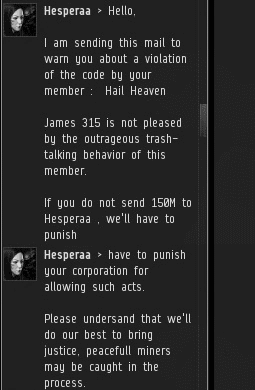 Hesperaa, one of the New Order's first Agents, was the leader of a small corporation devoted to highsec wardecs. She contacted Hail Heaven's CEO. While Hesperaa was in a private convo with me, she drafted the text of the EVEmail she planned to send.

Diplomacy proved to be a useful tool. 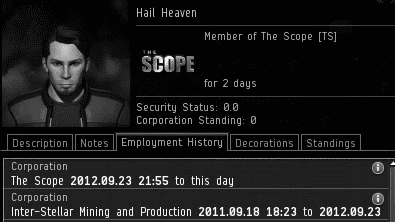 As reported back in that old MinerBumping post, Hail Heaven was expelled from his corporation. He'd been a member of that corp for over a year, and now they wouldn't have anything to do with him. His insults in local didn't result in the destruction of his ships, but he became a pariah. He faded into obscurity.

Fast-forward a few years. Last month, we learned about Adrien Naline, a particularly unappealing fellow. He quickly earned a spot on the Red Pen list. As we told you, when his own CEO found out what he'd done, she removed him from her corp. What we didn't tell you was how she found out. 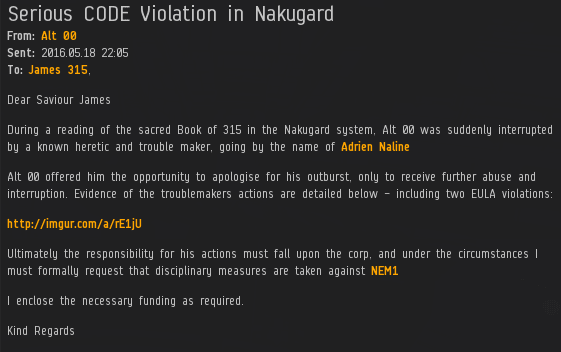 Agent Alt 00 requested that a message be sent, in the form of a wardec from CODE. itself. The message was received.

CODE. and the New Order in general have made plenty of use of wardecs over the years. What made this wardec a little unusual is that it, like Hesperaa's all those years ago, was directed at a single individual. Adrien's CEO was fully briefed on the situation: If Adrien was no longer in the corp, CODE. would no longer have a problem with them.

Adrien's CEO decided that her corp would be better off without him. The troublemaker couldn't be removed immediately, though. Under EVE's corp mechanics, it takes 24 hours to remove a member's roles; a member with roles cannot be kicked. (In many corporations, almost everyone has roles.) 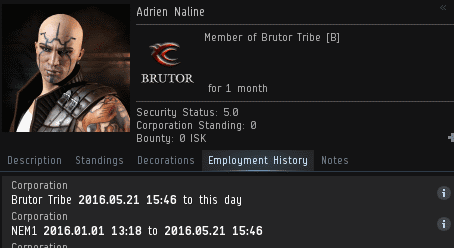 In due time, the bureaucratic hurdles were cleared. As with Hail Heaven, Adrien didn't lose his ships, but he lost his home.

The stigma of being a Code violator is not easy to overcome. Especially in this case; Adrien Naline was among the worst of the worst.

Compared to Adrien, someone like Sultina Uitoh doesn't look so bad. Still, when Sultinah lost a pod worth less than 100 million isk and was instructed to obey the Code, she couldn't resist the temptation to flaunt her disobedience. She thought she was too good to follow the Code. She was above it all.

Then something unexpected took place. Several weeks later, Sultinah's corporation was wardecced, seemingly out of the blue.

The corporation lived up to its name when a deal was struck to end the war.

When Sultinah was ganked, she only lost implants worth 95 million isk. No big deal. Easily replaced. Now it appeared that an offhand remark she'd made a month earlier was going to cost her a lot more.

Strange things were afoot in highsec.