Over One Trillion Thirty-One Billion in Shares Sold

Is it a good idea to invest in New Order shares? You do the math.

Alt 00 has been preparing for this day for some time. Now the exciting moment arrives: Her 1,000 shares earned Alt 00 a Supreme Protector's Tip of the Hat™ for sending us over the one trillion thirty billion mark. That was worth the wait--and then some! Look at that decadent marauder. Just what you need to whet your appetite for the next Kills of the Week post. But what is it doing here? Read on: 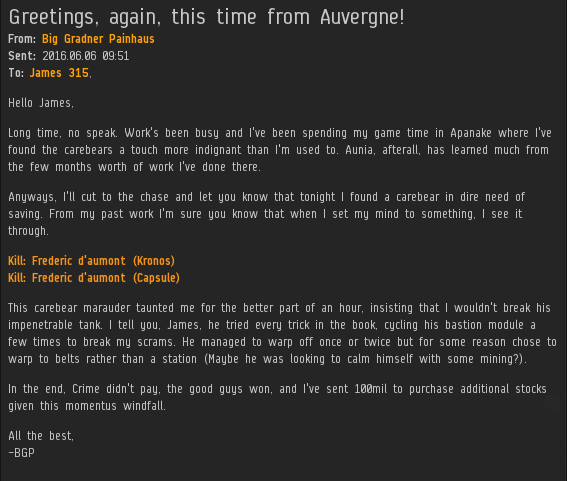 Our shareholders get the money to buy their stock in all sorts of different ways. The mighty Agent Big Gradner Painhaus and his Enyo managed to score kills against a 2.1 billion isk Kronos and the 950 million isk pod contained within. A nice drop resulted in a share purchase.

Agent Zoe Worclaw, too, managed to get her hands on some money.

Meanwhile, LordOfNipples Udan became a new shareholder, requesting "dank shares" when he sent in his isk. He wasn't disappointed. LordOfNipples acquired 500 dank shares and earned a Supreme Protector's Tip of the Hat™ for sending us over the one trillion thirty-one billion mark. Not bad at all!
Posted by MinerBumping at 17:07