Previously, on MinerBumping... The Extraordinary Compliance Program inflicted a kind of loss upon Code violators that they'd never known before: The loss of their membership in a corporation. By leveraging CODE.'s elite PvP killboard stats, a simple form EVEmail sent by the Saviour of Highsec was sufficient to bring criminals to justice.

The effect of the Extraordinary Compliance Program was impressive to behold: Rebels who had been smug and disdainful underwent a marvelous transformation.

When they learned the reason that they were being kicked from their corp, they didn't always embrace the Code immediately. But they were given a lot to think about--and plenty of alone time to think about it. 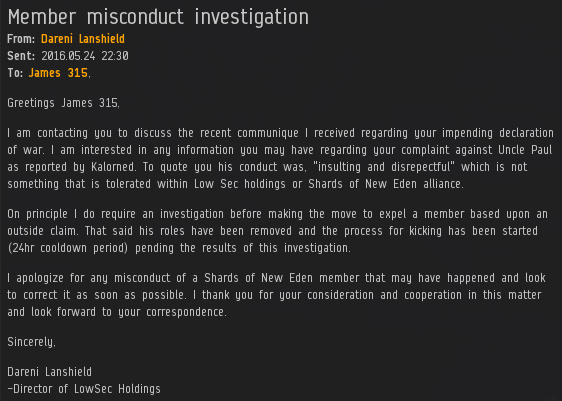 When the carebear in question was a member of an alliance, one might guess that the EVEmails were given less attention. Actually, the opposite is probably true, since alliances were more likely to have diplomats on staff.

Uncle Paul's misbehavior in Gamis occurred more than six months earlier. He'd probably forgotten what he'd said to Kalorned on that day. Now his reckless words came back to haunt him. 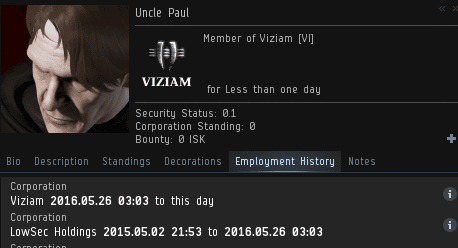 "The supreme art of war is to subdue the enemy without fighting."
-- Sun Tzu

Gantian was taken by complete surprise when his superiors told him that he was responsible for jeopardizing their alliance's future. His mind raced. As far as he could remember, he'd had no interaction with any Agents of the New Order at all. Actually, he was right. However...

Several months earlier, Gantian had been logged making an anti-gank comment in a private channel. Our Agents have eyes and ears everywhere. And they forget nothing. 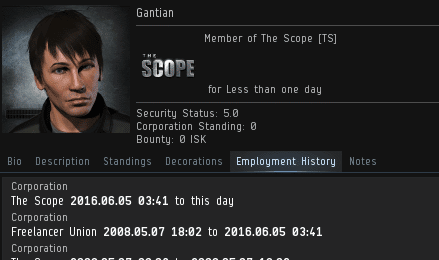 Gantian had been a member of his corp for more than eight years, and now he was no longer welcome there. It might seem like a high price to pay for making a thoughtless joke in a private channel. Nevertheless, it wasn't about what he'd said. Words are only the symptom of the real problem--thinking bad thoughts about the Code.

Not every Code violator is a suitable candidate for the Extraordinary Compliance Program. Many carebears are members of NPC corps, alt corps, or are the CEOs of their own corps. Others have moved on and joined nullsec alliances, most of which care little about highsec affairs. Since sending a form EVEmail costs no money and virtually no time, some nullsec alliances were recipients of EVEmails from the Extraordinary Compliance Program instead of being filtered out. Normally they ignore wardecs--or in this case, an EVEmail about a potential future wardec--but correspondence from CODE. tends to provoke a reaction anyway.

When word got out about the program, it triggered a firestorm on Reddit. Not for the reasons you might think, though. They didn't complain about the use of wardecs (or threats) to get people kicked from corps. The substance of the program was not commented upon at all, really. And for good reason: The EVEmail contained something so offensive to Redditors that it drew all of their fire.

Like waving a red flag in front of a bull. The most upvoted comments all howled with scorn. You see, although the EVE subreddit is filled with carebears (and players whose highsec alts have been ganked by the New Order), many of them have aspirations to one day become an elite PvP'er. "Relevance" is a more trendy measure of worth, but the carebears still treasure the idea of elite PvP, clutching it tightly in a special place within their hearts. If they work hard enough, and mine enough ore, maybe years from now they'll be allowed to fly a supercap in Pandemic Legion and press "F1" when instructed. This is their fondest wish, their dream of elite PvP. To suggest that their mortal enemies in CODE. practice elite PvP is like plunging a dagger into their souls. 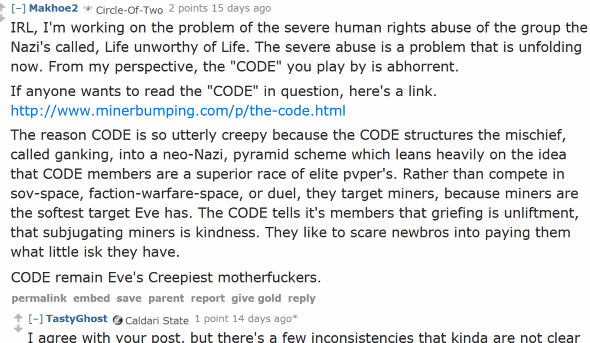 With multiple nearly identical comments about "elite PvP" exhausting that aspect of the conversation, the floor was opened to the more typical Reddit discussion about CODE.

The threat of total Goon domination of nullsec has passed, so the New Order has become EVE's most dangerous organization. Those Goons weren't so bad after all, it seems.

Redditors heavily downvoted the Extraordinary Compliance Program for its abuse of the term "elite PvP". Yet the work continued, its operations moving forward in the shadows.