Previously, on MinerBumping... In a few isolated incidents, Code violators managed to bring the wrath of a wardec upon their own corporation or alliance. But because the corp leaders were informed of the reason they had been targeted, violence was unnecessary. The offenders were simply removed from their corps, and peace was restored.

Sultina Uitoh's dismissive EVEmail to an Agent of the New Order had consequences she never imagined. By her own admission, Sultina had contributed billions of isk to Bartertowne Corporation in order to rapidly rise through its ranks. Now Sultina's CEO was negotiating her removal from the corp. 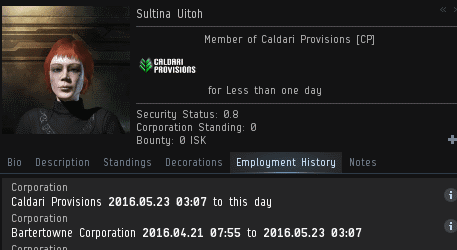 Sultina was expelled. As her CEO explained, there was a delay due to the 24 hour timer for removing member roles.

There are good reasons why wardecs aren't frequently used to target individual members in this way. It's a cumbersome and expensive process. The wardec interface is clunky, the timer for role removal gets in the way, and it's even a chore to end the war after demands are met. On top of that, it costs between 50 million and 500 million isk, depending on the size of the entity being wardecced.

Time to streamline the process. 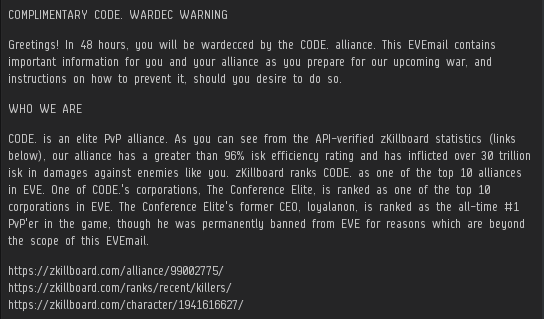 The next time someone needed to be punished with a wardec, war was not declared. Instead, an EVEmail was sent warning of a future war. In the first half of the EVEmail, the target corp/alliance was given the facts about CODE. Rebels and skeptics will tell you that CODE. is irrelevant and powerless, and that it's full of people who can't PvP, and that it can safely be ignored. Easy for them to say from the comfort of their anonymous commenter accounts. But if you're a CEO who's trying to grow a corp from nothing, staring down the barrel of a war with CODE. doesn't sound like fun. 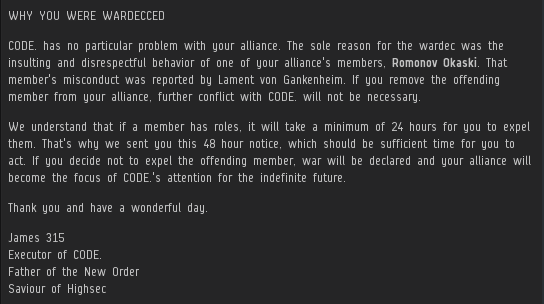 In the second half of the EVEmail, a solution is offered. The proposed solution doesn't require violent conflict. Incidentally, it doesn't require the use of the wardec interface or the payment of wardec fees, either. But would someone really allow the Code to dictate the membership of their own corp, just because an EVEmail was sent? Would the word of the Saviour of Highsec be enough?

Romonov Okaski's unnamed offenses resulted in the sending of an EVEmail to his CEO, his alliance leader, and their diplomats. One of the diplomats requested further information.

Helpfully, the miner's violations of the Code were on file. The New Order keeps extensive records.

Romonov's corp's diplomat was confident that an agreement could be reached. 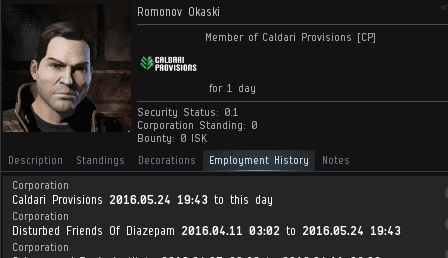 The lizard king fell from his throne.

That same day, a fellow by the name of Morpheus Atari found himself at the center of a controversy. His CEO and corp diplomats were told that they faced a war with the mighty CODE. alliance. Much to Morpheus' consternation, he was told that it was all his fault. He protested his innocence.

A carebear is never as innocent as he says. It was nearly two months ago, but Morpheus had indeed expressed anti-CODE. sentiments. 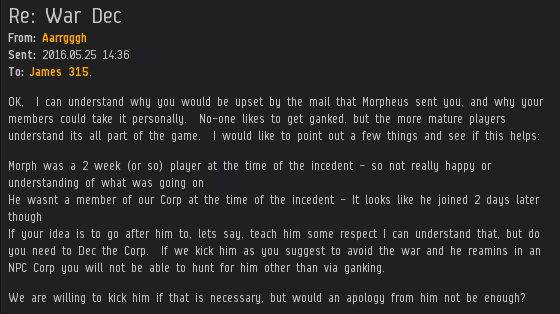 The matter was forwarded to Morpheus' corp's diplomat, Aarrgggh (not to be confused with our own illustrious Agent Aaaarrgg). Under the circumstances, the diplomat felt a less severe approach might be the better option. 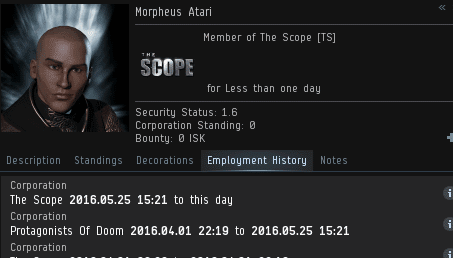 No, the Code demands total compliance and nothing less. In at least some cases, a simple EVEmail could accomplish more, and leave a more lasting impression, than a gank or series of ganks. And so the Extraordinary Compliance Program (ECP) was born. Unbound by the limitations of the wardec mechanic, it evolved and quietly extended its reach.

But how would the EVE community react once the ECP's existence was discovered?