It was another disastrous week for the highsec carebears, who suffered numerous defeats at the hands of victorious New Order forces. The smartest of the carebears have already renounced their former bot-aspirancy and have embraced the Code. The rest, I'm afraid, are doomed to repeat the miseries they experienced during the week of May 29th @ 00:00 EVEtime through June 4th @ 23:59 EVEtime. 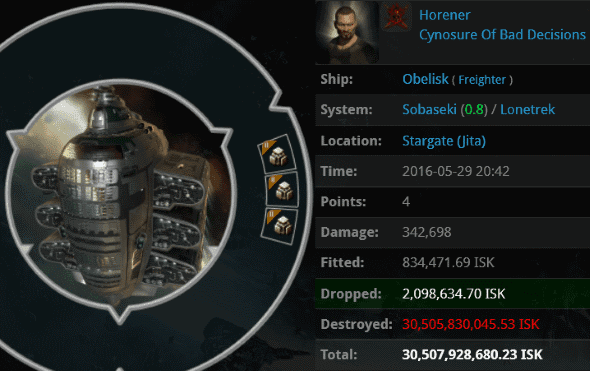 KILLMAIL
Horener considered himself superior to his fellow Code-violating freighter pilots. He triple-bulkheaded his Obelisk and kept to the higher-security systems. He even avoided Uedama. However, he made two key mistakes: His cargo was too expensive, and he failed to purchase a mining permit.

If you want to transport a Fortizar, given how expensive these things are, nothing less than explicit approval from an Agent of the New Order will do. 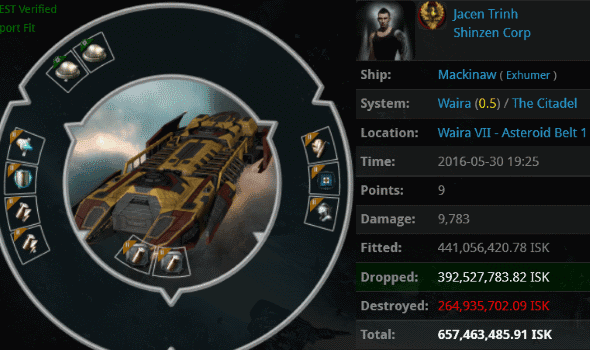 KILLMAIL
Jacen Trinh's Mackinaw is a study in what can go wrong when a miner deviates from the Code. Look at this mess. Not only was the Mackinaw equipped with ORE Strip Miners--an illegal decadence--the ship was capacitor tanked. It soon attracted the attention of Agents FunTimesForYOu, Kerberus IV, and vaok Aldent. The shockingly AFK Jacen Trinh didn't bother to respond to the attack. Seventeen minutes later, the gankers returned to deal with his 1.4 billion isk pod. 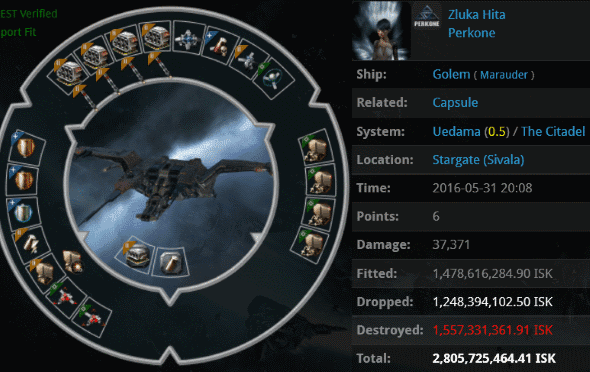 KILLMAIL
Zluka Hita's outrageous 2.8 billion isk Golem was caught without a license in Uedama, which is Kusion country. They don't take well to Golems in Kusion country. Agents Johnathan Kusion, Jayden Kusion, Jayson Kusion, Jackson Kusion, Jake Kusion, Joshua Kusion, Jeremiah Kusion, Joseph Kusion, Justin Kusion, Jason Kusion, and Joel Kusion landed on the Golem as soon as he decloaked. The good news is, the carebear had enough sense to return to his keyboard and activate his active tank modules. That was sufficient to prevent the Kusion clan's DPS from destroying his ship. The Golem survived the attack long enough for CONCORD to arrive and shut down the gank.

Now for the bad news: Zluka couldn't resist leeching off the CONCORD mails...

Yes, Zluka managed to get his 2.8 billion isk Golem CONCORDed. (It's almost as if the CODE always wins, always!) Zluka's smartbomb triggered CONCORD and the gate guns when it hit the Kusion clan's neutral scout alt. The alt earned a kill right on Zluka, which was set at 150 million isk. Surprisingly, someone purchased the kill right a few days later. You see, Zluka was spotted piloting another 2.5 billion isk Golem in Perimeter. It was incinerated (along with an 800 million isk pod).

That's not the worst part, though.

Just as his Golem was taking its dying breath, Zluka activated his smartbomb and hit a neutral. So once again, someone has a kill right on Zluka. Could this dizzy carebear go on chaining expensive Golem losses indefinitely? 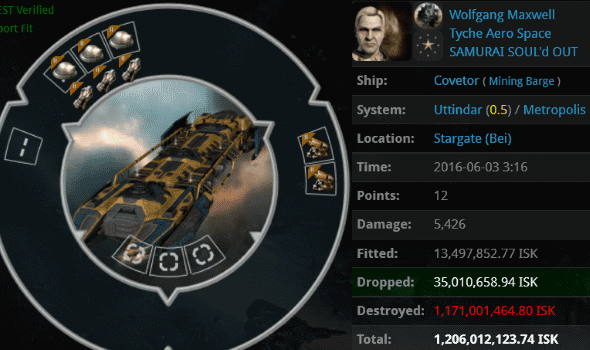 KILLMAIL
Wolfgang Maxwell got creative with his 1.2 billion isk Covetor, which was hunted down by Agents Lucia and Eva Mavas while in the Hek neighborhood. Let's see: No ORE Strip Miners, no blingy yield mods or shield mods... Was it filled with Harvester Mining Drones, perhaps?

No, just a PLEX and a bunch of blueprints. Typical stuff you'd want for your mining ship. 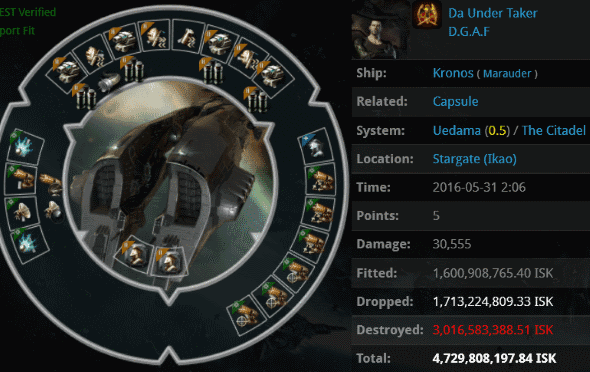 KILLMAIL
Remember how I said Golems don't go over well in Kusion country? Well, that really extends to all marauders, which are a problematic class of ships. Marauders encourage decadent, PvE-oriented gameplay. Da Under Taker brought a 4.7 billion isk Kronos into Uedama. If Uedama were the setting of a sitcom, you would've heard the music stop to a record scratch, or seen someone doing a spit-take. 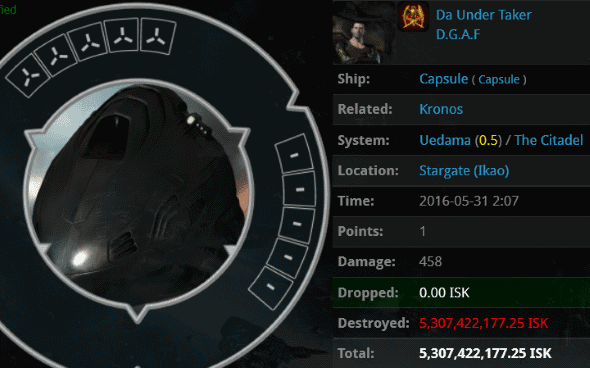 KILLMAIL
It wasn't enough to fly a blingy marauder; Da Under Taker had to sport a 5.3 billion isk set of implants, too. Joshua Kusion was the quickest Kusion on the draw.

Ascendancy implants boost a ship's warp speed. In the context of highsec PvE, haulers use them to make trips slightly more quickly. I'm sorry, but no. Not in my highsec you don't.
Posted by MinerBumping at 21:50