The Agents of Compassion

There was exciting news out of the Essence region this week, where New Order forces scored an impressive victory in the Ignebaener system. A bot-aspirant army consisting of Texeress Thaar's unfit Retriever was decisively defeated by a single New Order Agent.

Texeress was left penniless. Without anyone else to turn to, the miner sent a convo request to the man who had ganked him. Why? Because despite being on opposite sides of the war, it was clear that the ganker was a success at EVE. He knew how to play the game. 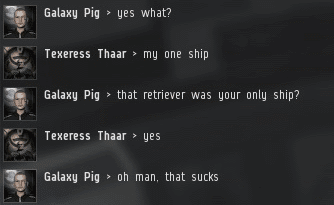 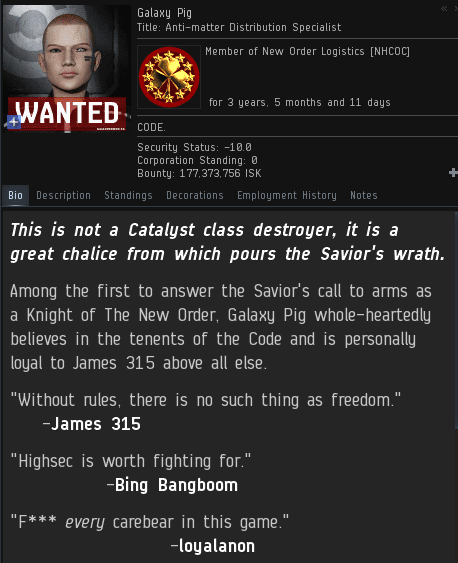 The Agent in question was Galaxy Pig. When he enters local, every carebear sits up and pays attention. If they're at their keyboard, that is. 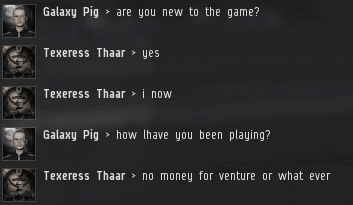 The miner was completely destitute. He didn't have a corp or any friends in the game. He'd spent all his time mining in highsec. All he had was the name of the Agent who'd killed him. He could only hope that would be enough. 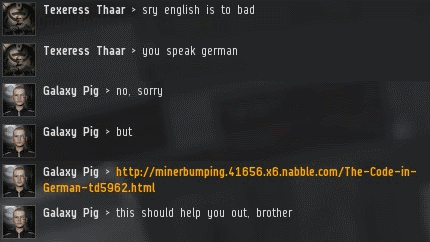 Galaxy Pig's compassion went beyond offering sympathetic words. Before long, he was providing the miner with the tools he'd need for survival in highsec.

I've often said that the New Order's Agents are the only friends that the highsec miners have ever had. Since the beginning of EVE, everyone else has ignored them. We're the only ones who bothered to give them content or help them play the game. 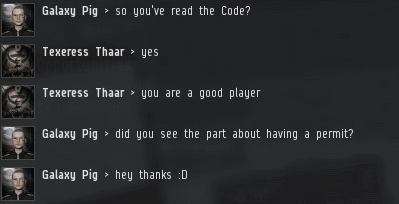 Galaxy Pig offered his assistance to Texeress. Where was Anti-Ganking or the theme park crowd? Probably off somewhere being toxic and failing to stop ganks. Meanwhile, the Agent and the miner were establishing a friendship. Or were they?

Our Agents have a good understanding of the mentality of the highsec miner. It's an understanding that has been built up over years of dealing with them. We know that miners can feign friendliness and good intentions, all while secretly craving isk. They must be put to the test.

As soon as Galaxy Pig broached the subject of receiving a permit payment, Texeress took off his mask. He revealed his true form--that of an enemy of the New Order and its Code.

Texeress believed that the kill right he'd earned was some kind of trump card. He was wrong. Woe to the carebear who ever thinks he's somehow gained an advantage over one of our Agents.

The New Order's compassion is all the more commendable in that it extends even to our declared enemies. Galaxy Pig offered to reimburse Texeress's Retriever loss--if only the poor miner would pay him 10 million isk. That's an even better deal than the isk doublers in Jita will give you. But Texeress Thaar was a hardened bot-aspirant. He couldn't bear to part with any amount of isk, no matter how small the amount, no matter how good the reason. Texeress immediately left the convo.

Then Galaxy Pig saw the miner hard at work in Ignebaener local chat: 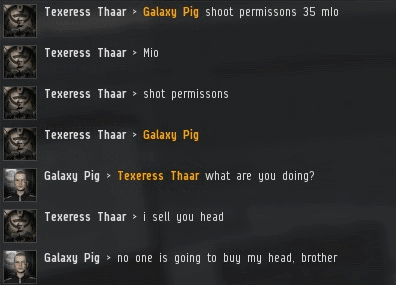 Compassion turns to pity.
Posted by MinerBumping at 17:59