Mercy for the PLEX Dropper 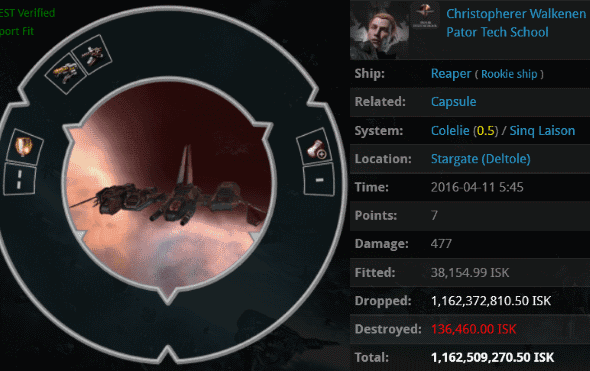 Christopherer Walkenen's anti-tanked Reaper was worth 1.1 billion isk. It was autopiloting while carrying a PLEX.

Agent Tisiphone Dira lent the carebear a sympathetic ear and a shoulder to cry on. It was the least she could do while her scout alt was busy looting the PLEX.

Though the rebels and skeptics and pro-carebear crowd offer lip service to gank recipients, it's the Agents of the New Order who actually bother to help them.

Tisiphone's compassion for carebears is so great that she'll even take pity on someone who hauls PLEX. Assuming they're actually hurting financially, that is. The EVE players with billions in their wallet don't need it.

Christopherer claimed to be eligible for financial aid. Sadly, carebears have a tendency toward mendacity, so our Agents have no choice but to request proof of eligibility. Too many carebears have abused our trust in the past.

Tisiphone was troubled to discover that Christopherer's other character, Lainia Tsutola, owned an Orca. The carebear was now considered a borderline case. Tisiphone would need to get creative.

Our Agent proposed a trade. She'd still hand over the PLEX, but she needed the Orca from the Lainia character. Christopherer would receive a net 400 million isk in financial aid, while Tisiphone would still gain 700 million from the gank.

But Tisiphone's mercy had its limits. She drew the line at schlepping all the way out to Jita. The Orca would need to be delivered to her home base in Hek by way of courier contract.

Of course, finding someone who could transport cargo as big as a packaged Orca could be tricky. Highsec courier services have come under pressure from freighter gankers working for the New Order. Fortunately, Tisiphone knew a guy.

As luck would have it, just a few minutes after the Orca was handed over to the courier, a new complication arose: Tisiphone discovered an irregularity with the Lainia Tsutola character. 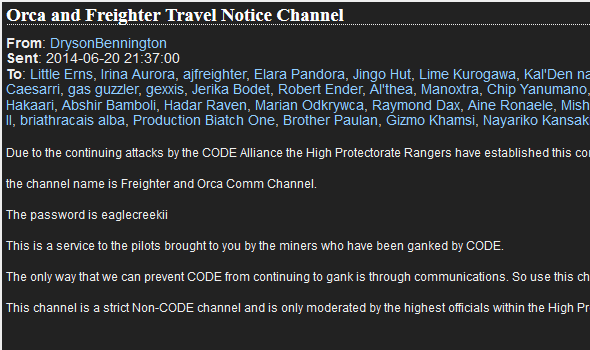 While using the API to peruse Christopherer's and his alt's EVEmails, Tisiphone was stunned to see a communication from none other than DrysonBennington. Two years ago, the notorious Anti-Ganker apparently sent mass EVEmails to freighter and Orca pilots. It seemed innocent enough, but it was sufficient to flag Christopherer's account. An investigation was warranted.

A New Order diplomat was assigned to the case.

Agent TheInternet TweepsOnline TheInternet was able to mediate a settlement that involved Lainia transferring additional isk and, for some reason, joining TheInternet's own corporation. 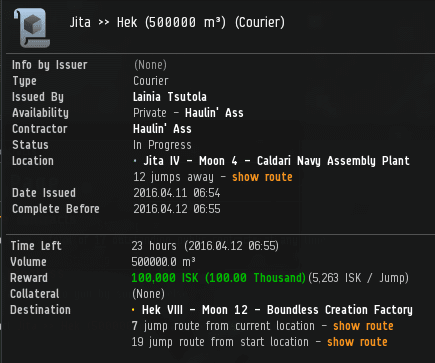 As for the courier pilot, his perfect record didn't hold up as he encountered unexpected difficulty completing the Orca courier contract. As a result, Tisiphone was unable to give Christopherer his PLEX back. But everything worked out in the end: The contract required zero collateral, and the courier was able to keep the Orca to nurse his wounded pride. Highsec shone brightly that day.
Posted by MinerBumping at 19:41