Another silent highsec system. All was quiet. And then...


EVE System > Channel changed to Local : Elonaya
Darkkdrachen > oleeeeee!!!
Darkkdrachen > hahahaah
BudweiserBubba Anheuser > Been looking for a good reason to blow some isk on a war dec
Mihai Albescu > You could buy 5 years worth of permits instead

The system sprang to life. An Agent of the New Order brought content to Elonaya. 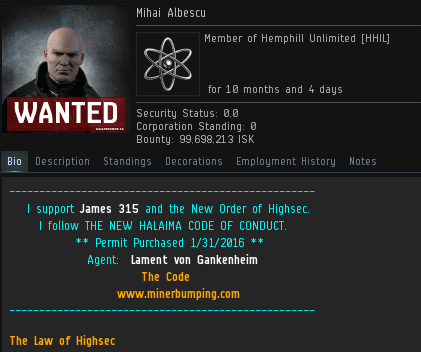 The man in question was Mihai Albescu, one of countless Agents who do not belong to the CODE. alliance, but who nevertheless represent the New Order and its Code.


"I decided to walk a day in James 315's shoes, using his time-tested method of bumping. I equipped a Stabber Fleet Issue and visited an ice belt in Elonaya system near Jita. The good news is that almost all of the miners were aware of the Code and were following the rules about tanking their ships and being present at their keyboards. The bad news is that not a single one of them had a permit in the bio."

It's difficult to overstate the New Order's impact on highsec life. Even miners who refuse to embrace the Code are forced to obey many of its rules. Every miner in highsec who remains at their keyboard, or who sacrifices yield in favor of tank, has had their gameplay directly influenced by the Code.

The spectacular killmails produced by gankers attract a lot of attention, and for good reason. Bumping remains an effective alternative, though. And it always takes the miners by surprise. 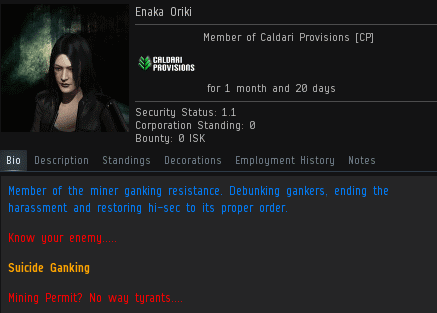 One advantage that bumpers have over gankers is that they can spend a lot of quality time relaxing in the asteroid belts and ice anomalies. They get to know the miners well. Agent Mihai swiftly identified Enaka Oriki as a rebel.

Ganks produce a sudden shock to the bot-aspirant's system. Bumping, on the other hand, is a more gradual means of persuasion. Its power only dawns on the miner slowly.

In rapid succession, Mihai bumped one miner after the next, producing a symphony of different reactions in local.

Sarie Thiesant dropped a "Bumping? That won't do anything" before repeating the widespread rumor about me being permabanned from EVE. For some reason, that rumor has been circulated and recirculated since the earliest days of the New Order.


Mihai Albescu > What's the perceived scam, friend?
Andrev en Tilavine > CODE. at least has a mission; delusional, but a mission nonetheless.
Mihai Albescu > Their vision is good. Looks at all these tanked ships. Not a retriever or hulk among them.
Mihai Albescu > and every single one of them at their keyboard.
Sarie Thiesant > It is all about the isk war. You make zero bumping me. I make some. :)
Mihai Albescu > Making none, now, lol. www.minerbumping.com

Miner bumping is arguably the most elite PvP available in EVE. Unlike other PvP'ers, a bumper must manually navigate, aiming his ship with near-perfect timing and precision. It's also a psychological battle, a test of wills and endurance. Who will give up first, the bumper or the miner?

Mihai's faith in the Code won the day. One after the other, he removed all of the miners from the Elonaya ice anomaly. Sarie was the final miner to give up. She suddenly realized she had better things to do than get bumped out of mining range. Rebel miners ask what bumping can possibly do. The real question is, what can't it achieve?


Sarie Thiesant > i was going to go to zzz, but now i just want to hang out.
Mihai Albescu > Sounds good to me. It gives me a chance to clear up your misconception.
Sarie Thiesant > Which one? Your harrassment? Your bullying?

Bumping a miner puts them out of commission temporarily. They might stop mining for a few hours, or a day or two. To have a truly lasting impact--for the miner to be permabumped, you might say--they must be educated in the Code. Now that the mining had ceased, it was time for Agent Mihai to teach the Elonaya system.