There are so many different ways to enforce the Code in highsec. Our Agents are constantly developing and refining new methods. 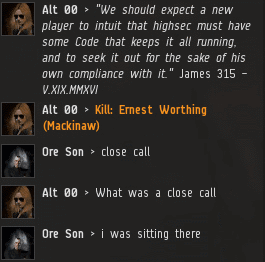 Agent Alt 00, for example, is a master of quoting MinerBumping posts and then using ganks as an exclamation point. 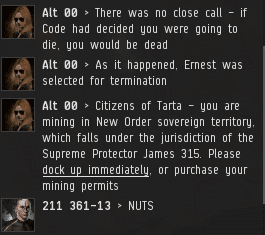 Our Agent made a surprise inspection of the Tarta system, which is located in the Genesis region. The place was quickly whipped into shape. 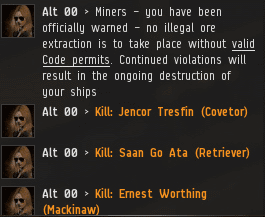 It's pretty tough for a miner to claim ignorance these days. If the local window in your system looked like this, wouldn't you know that you needed to do something? 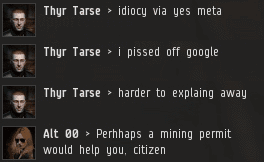 Miner Thyr Tarse piped up to voice what looked like some sort of complaint. Our Agent knew just what he needed. 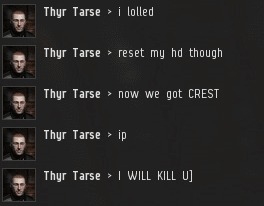 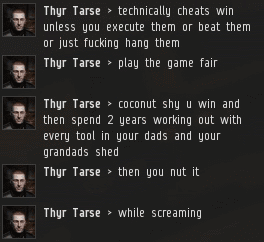 ...But it took time for our Agent to realize just how wrong. 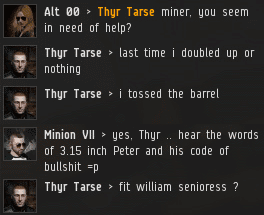 Alt 00 was alarmed. She offered to give the miner any assistance he may have needed, but only more confusion followed. 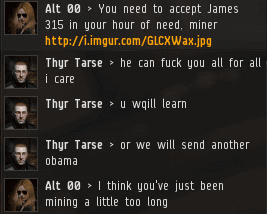 Our Agent diagnosed the miner's ills. It was a case of chronic bot-aspirancy. In layman's terms, too much mining rots your brain. 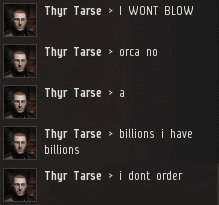 Local chat steadily filled with line after line of nonsense. Some of what Thyr said appeared to be related in some way to the Code, but there was also plenty of disconnected gibberish. 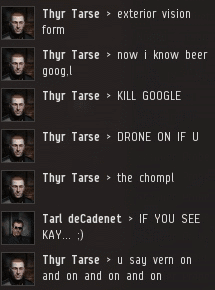 Alt 00 stepped away to see if she could summon reinforcements. 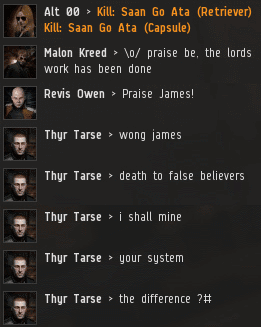 Alt 00 resumed ganking as nearby Agents arrived in the system. The bot-aspirant miner was somewhat responsive, but still malfunctioning. 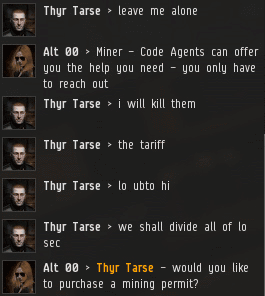 Sadly, the miner couldn't be reached. Not this time, anyway. Alt 00's patrol was ending, so she asked Agent Malon Kreed to check on the system while she was away. A few hours later, Malon returned to see if Thyr had calmed down.

To his astonishment, Malon discovered that Thyr hadn't stopped talking--apparently to himself. 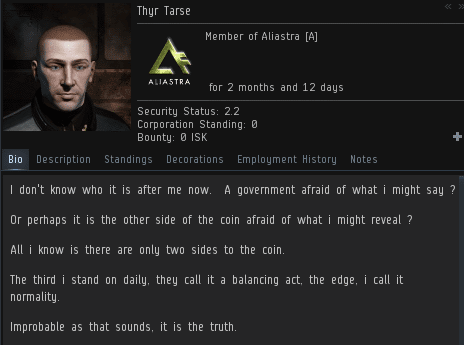 Normally, one would expect that a jolt of emergent gameplay might be enough to shock a miner out of his bot-aspirant routines. Thyr Tarse has been ganked a number of times, with no result. There is little hope for a miner in this condition. But in the New Order of Highsec, a little hope is hope enough. As the Order's motto states: No miner left behind.
Posted by MinerBumping at 17:44