To the unenlightened carebear, the Code can be difficult to grasp. Baffling, even. 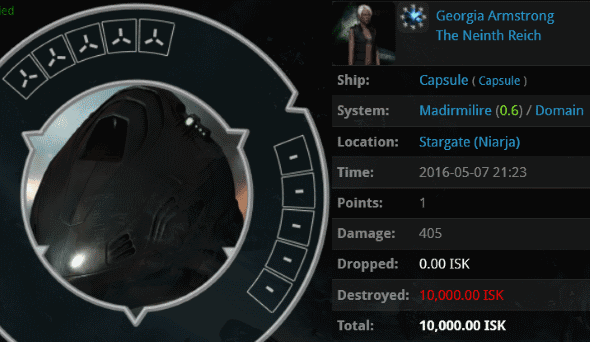 Take, for example, the practice of ganking empty freighters--or even empty pods. Why bother? What could motivate an EVE player to do something like this? Our Agents are more than happy to explain. 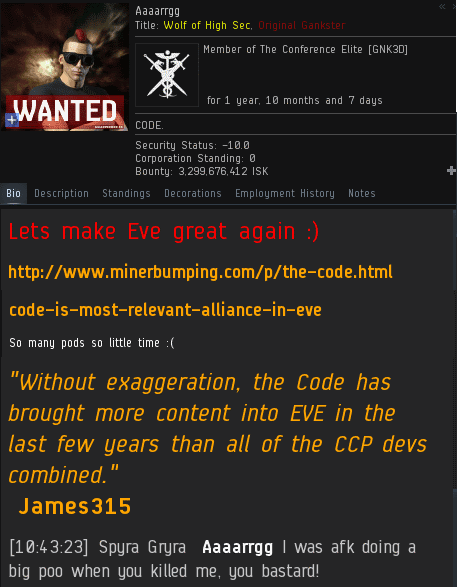 The answer, as always, is found in the Code.

Georgia Armstrong was confused by our Agent's actions. Why do something if you don't get isk for it? To fully understand the emptiness of the bot-aspirant, imagine Georgia's EVEmail was a response to Aaaarrgg sending her a gift (which it was). Why give something to another person if there's no monetary reward? 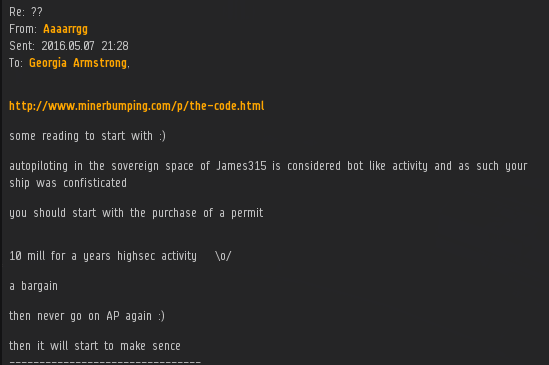 Our busy Agent quickly dashed off several lines of text to get Georgia started on the path to enlightenment.

The situation escalated. Georgia threatened to forward Aaaarrgg's EVEmail to CCP. If she made good on the threat, it would simply result in another CCP staff member wasting time on a frivolous petition. Though it wouldn't be a complete waste of time--the EVEmail included a link to the Code, after all.

Georgia bristled at the suggestion she could afford the 10 million isk. Like so many others, she claimed to be a helpless newbie. Her story didn't hold up, though: The "newbie" lectured Aaaarrgg on the EULA and had previously said she'd heard about CODE. members being banned. They teach that stuff in the tutorial now, do they? 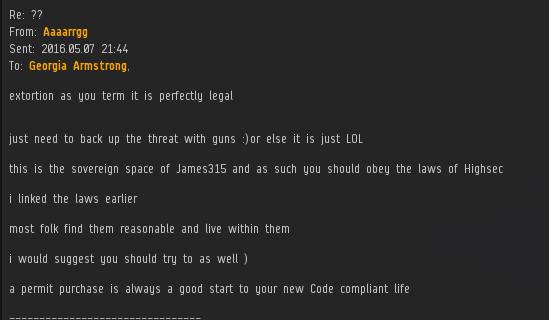 Aaaarrgg indulged Georgia's claim of newbie status and educated her. With an impressive succinctness, our Agent taught Georgia many things about EVE and life.

Earlier, Georgia had relied on CCP to fight her battles. Apparently she believed Aaaarrgg when he told her that the EULA hadn't been broken. Somewhere, a GM's workload was lightened by one petition.

But the crushing of Georgia's hopes for salvation from CCP left a void within her. What would she use to fill it? "Yo momma" jokes?

As ever, Aaaarrgg steered Georgia in the right direction--if only she'd listen.

Unable to hide behind CCP and phantom EULA violations, Georgia was reduced to making tastless comments about our Agent's mother. The carebear could've apologized when she realized she'd wrongly accused Aaaarrgg of breaking the rules. Instead, the "newbie" was unmasked as a rebel sympathizer, her toxic attitude and hypocrisy revealed for all the world to see.
Posted by MinerBumping at 16:02