EVE's "learning cliff" is notorious. What's the best way for players--new or old--to gain a better understanding of EVE? For example, suppose you're Jane Yassavi, whose fail-fit Mackinaw was suicide ganked in highsec. How do you make sense of that attack? 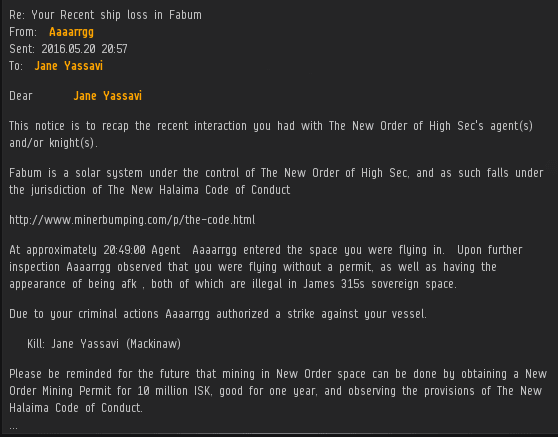 The New Order to the rescue. Agent Aaaarrgg provided the miner with a detailed report about the emergent content she'd received from him. You see how useful that is? She got the who, what, where, why, when, and how. All in one EVEmail.

Jane's response was to give up and quit EVE.

A few minutes later, she sent me a quitmail, too. But in the meantime, Aaaarrgg was busy: 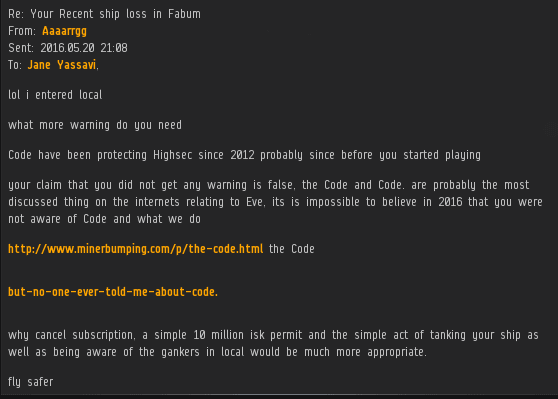 Aaaarrgg called Jane out on her nonsense with some realtalk. He linked a recent MinerBumping post, "But No One Ever Told Me About the Code"--an instant classic.

Contrary to popular assertion, there's nothing inherently wrong with people terminating their subscriptions to EVE Online. If people don't enjoy a game, of course they shouldn't feel obligated to keep playing it; they should find one they like. And if a carebear starts playing EVE solely due to mistaken assumptions about the kind of game it is, it's only natural that they should stop playing the game once those assumptions are corrected. 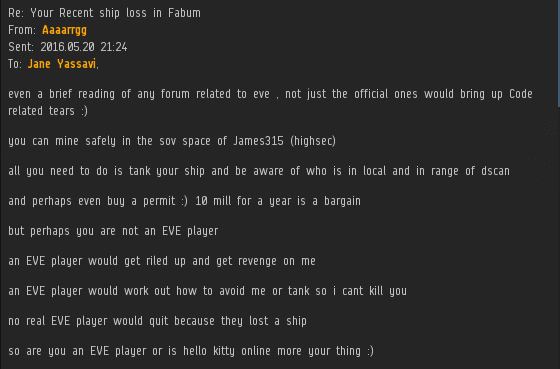 Nevertheless, the New Order is not in the business of chasing people away from EVE. In fact, we've done more than any other group--arguably including CCP--to retain players and attract non-players to the game. Thus, before a carebear leaves the game permanently, our Agents do their best to encourage them to find a way to enjoy the game. As Aaaarrgg did here, in a poetic EVEmail.

But Jane wasn't having any of it. She still felt like quitting the game.

Our Agents aren't known for giving up easily. If there was even the slightest possibility of retaining an EVE player, Aaaarrgg would go for it.

It seemed nothing could dissuade the miner from leaving EVE. She just couldn't see herself playing a game where she could be ganked. Aaaarrgg took a deep breath. One more try. He began to write a passionate defense of EVE, drawing upon the lessons he'd learned from his early days, when he, too, carried a mining laser: 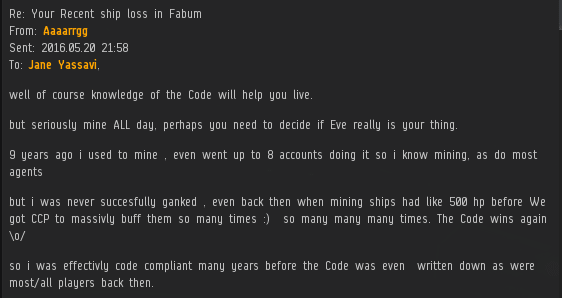 Aaaarrgg was once a miner. Though the Code did not yet exist, he could still feel its influence, as ripples radiating backward through time.

With characteristic brevity, our Agent summarized the true nature of EVE, the value of its unique qualities, the threat posed by bot-aspirants, and highsec's desperate need for the Code.

Jane Yassavi did not reply.

But she didn't quit. In the next few days, she joined a corp, went out to nullsec, and engaged in PvP. Once again, an Agent of the New Order improved EVE's player retention rate while simultaneously creating content, reducing bot-aspirancy, and enhancing a carebear's enjoyment of the game. Not bad.

The Anti-Gankers, rebels, and carebear apologists will tell you that our Agents are bullies who drive people away from the game. The truth is, you'll never find a group of people more dedicated to EVE Online than the Agents of the New Order.
Posted by MinerBumping at 17:18