The Wise Man in Local, Part 1

CCP has admitted that the best content in EVE is the content made by the players themselves. And nobody makes better content than the New Order of Highsec.


EVE System > Channel changed to Local : Bahromab
Aaaarrgg > gf
Alastra Starlaa > Aaaarrgg according to code you are obliged to challenge a miner with a message before ganking
Aaaarrgg > read again
Aaaarrgg > everyone should be aware of the Code by now

Content arrived in the Bahromab system when Agent Aaaarrgg engaged in elite PvP with an enemy Retriever piloted by Sir Darkan. The miner was vanquished. In an instant, the system came to life.


Alastra Starlaa > also your whole ethos is about punishing afk play not ganking people for giggles,
Aaaarrgg > well i entered local, he didnt dock
Aaaarrgg > no wave
Aaaarrgg > totally afk, pod sat there for ages
Alastra Starlaa > code has fallen a long way from what it was supposed to be because of pilots like you that hide behind it

Once upon a time, it was fashionable for miners to deny the existence of the Code. Then the space lawyers came along and declared that although the Code existed, it was a violation of the EULA. Now the space lawyers argue with Agents on the Code's terms.

The self-proclaimed "newbro", whose character as indeed only a few days old, lamented the fact that Agents do not follow the Code. Alastra also claimed that the New Order isn't as principled as it used to be. When this line of argument first appeared, I asked where all of those nostalgic supporters were during the early days of the Code. Now we know--they weren't playing EVE yet.

Another complaint I see these days: Rebels and skeptics are disappointed that I'm never online. But thanks to the watchlist nerf--which predates Alastra--how could they know when I'm online? Regardless, you can always find me in highsec. Wherever my Agents are doing my work, there I am also.

And with that single comment, Alastra Starlaa condemned countless newbies who claim ignorance as an excuse for disobeying the Code. At the same time, Alastra dealt a mortal blow to the rebels and skeptics who deny the New Order's relevance. New players who haven't yet learned of the existence of The Mittani or Pandemic Legion are studying the Code. We are the biggest thing in EVE right now. To think that people say EVE is dying--it sounds like the game is thriving!


Alastra Starlaa > but also some people read about games before they get into them or watch youtube channels
Alastra Starlaa > i got into eve by watching wingspanTT
Aaaarrgg > so everybody knows about the Code :)
Aaaarrgg > \o/
Aaaarrgg > AG usually claim Code are irrelevant, now you change your tack

Aaaarrgg took a moment to bask in the glory of the Code's victory. Our Agents win victories even during their aggression timers.

As long as we're busting myths, how about another one? People say that ganking would continue even if the Code didn't exist. Actually, CCP's own report at the end of 2012 stated that following their nerfs to ganking, miner ganking was at an all-time low (see toward the bottom of page 104). Then the New Order created its army of Knights. Today, we're the first thing every player learns about. We single-handedly resurrected the practice of miner ganking. Another reason to thank your New Order content creators.

Because of the presence of a single New Order Agent, Bahromab local evolved. Its silence, having been broken, gave way to a fruitful conversation. Naturally, our Agent was at the center of it all, enthroned by the carebears' attention.


Aaaarrgg > go back on the forums
Aaaarrgg > and read all the threads on the lack of ore
Sparkle Sauce > i've read the threads but i was playing then and i never had any problem finding ore
Sparkle Sauce > so the threads exagerat, it was just a few people bitching about their systems and assuming it was the state of the game
Alastra Starlaa > i dont know why you cant just admit you do it because you like being destructive, there is no shame in it
Aaaarrgg > why would i when Highsec still needs saved from the bots getting a toehold again

Our hero made the best possible use of his 15-minute timer. He taught the miners about EVE history and the Code. Even those who disagreed with the Code found a reason to remain at their keyboards.

Then Alastra made a solemn accusation against our Agent. She charged Aaaarrgg with attempted ganking.


Alastra Starlaa > thats why i even bothered calling you on your bullshit normally i just ignore code pilots when i see them ganking they arent relevant to my playstyle
Alastra Starlaa > you did it a moment ago on the belt
Aaaarrgg > the retriever ?
Alastra Starlaa > no you tried to scramble my little mining frigate

Believing her own ship was under attack during the Retriever gank, Alastra had fled from the asteroid belt in her Venture. Wait a minute--didn't Alastra say earlier that she wasn't a miner? Typical. I wish I had 10 million isk for every time I heard that one.

Next, the miner accused Aaaarrgg of lying. She believed he was trying to cover up his warp scramble attempt. Aaaarrgg scrolled through his log. 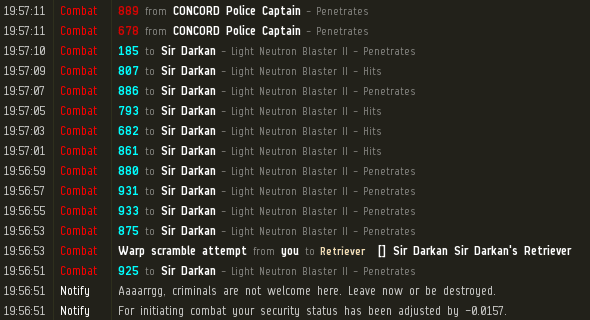 Our hero was telling the truth. Only the Retriever had been scrambled. Alastra's Venture was never attacked at all. Aaaarrgg posted a screenshot of the log and made it available to everyone in Bahromab local. Faced with this undeniable evidence, would the "newbro" admit she was wrong?