Holding It for a Friend, Part 2

Previously, on MinerBumping... Agent Krominal and his friends proved that even if you gank a six-year veteran of EVE, you'll still hear complaints about newbies and player retention. That's what happened when they destroyed devinebish's Mackinaw, which he claimed was actually the property of a new player.

Seeking reimbursement and a sympathetic ear from Agent Lament von Gankenheim, devinebish explained the situation. His Mackinaw was the property of a "female" who began crying when she heard about the gank. 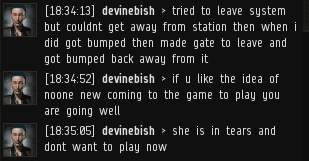 devinebish's story had some holes, like how our Agent managed to bump him away from a stargate before he could jump through it. Regardless, someone was crying and threatening to quit EVE. 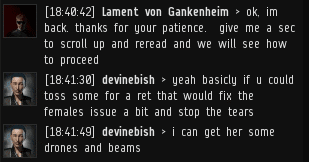 Luckily, devinebish believed that if the female received some isk, she would stop crying and would renew her subscription--thereby saving CCP from bankruptcy. 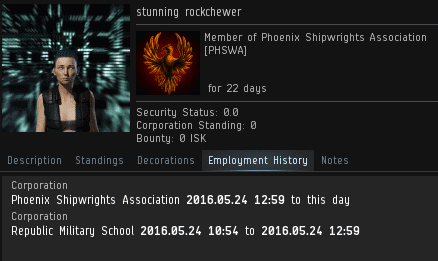 Having played EVE for only a few weeks, the female had no other option but to mine in highsec for an indefinite period. Let's be honest, choosing the name "stunning rockchewer" wasn't an auspicious beginning to her EVE career. Compare that to all the creative ganker character names you see on freighter killmails. 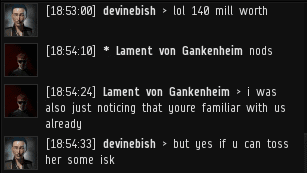 One of our Agents' talents is the ability to get caught up to speed very quickly. Lament fully absorbed devinebish's peculiar tale. As usual, the story's punchline was "gimme money." 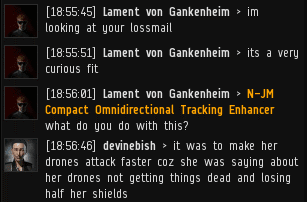 Lament wasn't ready to authorize reimbursement just yet. According to devinebish, he was merely doing rockchewer a favor by fitting the Mackinaw for her. Yet the fit in question didn't appear to be the work of an expert. 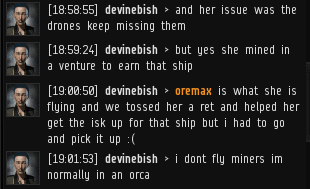 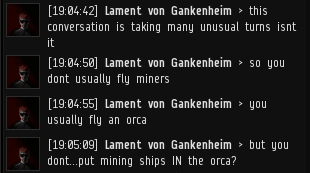 New Order Agents are known for being very generous when it comes to reimbursing miners. But they don't give their isk away willy-nilly. They must have all the facts. 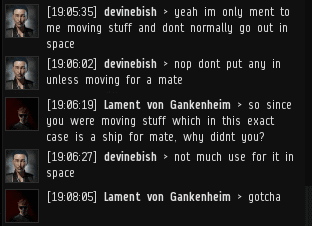 Lament von Gankenheim was pretty close to forming an opinion on this one. 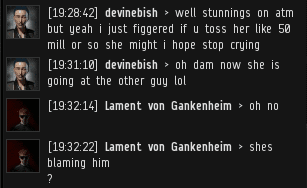 At the very moment that our Agent was about to make a decision, he received word of a new development. stunning rockchewer was making her presence known in local.