Previously, on MinerBumping... Sam Calaticcrowd made his way into the Anti-Ganking channel for the first time, braving its toxic atmosphere in order to learn about this "CODE" thing everyone in EVE is always talking about.

The Anti-Gankers revealed an intense dislike of the Code--and an equally profound ignorance of it.

Sam was suspected of being a spy. However, there was no evidence either way, so the Anti-Gankers allowed him remain. Litigating the matter would've been a hassle. It was easier to quietly resent him instead.

Tailsko repeated his horror story about being harassed by New Order Agents in other games. The experience was so traumatic that he couldn't seem to remember anything about it, including the names of the Agents or even the name of the game.

So far, Sam felt uninformed. He had good instincts.

Another Anti-Ganker, Sodium Oxide, entered the mix. His reason for hating the New Order was simple: They gank miners and freighters. Faced with such a phenomenon, what reasonable person wouldn't devote his life to failing to stop ganks? 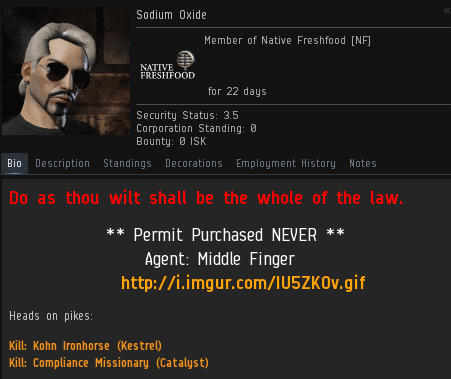 Sodium Oxide was the heavyweight of the group, a serious Anti-Ganker with an impressive résumé: He'd once leeched on the killmail of an Agent's Catalyst as it was being killed by CONCORD. Also, he once killed a Kestrel apparently unrelated to the New Order. In short, Sodium Oxide didn't just talk the talk, he walked the walk.

Sam wasn't sure yet if he shared the Anti-Gankers' hatred of the Code.

The more the Anti-Gankers talked about the CODE. alliance, the more it seemed to capture Sam's imagination. The Anti-Gankers aren't known for winning hearts and minds.

ShaliWhacker accused our Agents of not honouring their permits. He couldn't remember the names of any Agents who'd ganked permitholders, but they were likely the same Agents who harassed Tailsko in another game. This all took place in the aftermath of a 100 billion isk heist that cleaned out the New Order Treasury.

Then came the linking of memes. 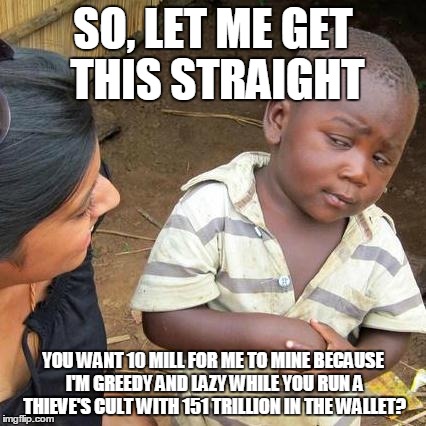 Actually, since that 100 billion isk theft, our Treasury has only 150.9 trillion remaining.

Anti-Gankers are the New Order's secret weapon. They convert even more people to our way of thinking than most Agents do.

After Sam left, the Anti-Gankers resumed their idle gossip. The rant indeed sounds interesting, but unfortunately you won't find it anywhere. The last remaining copy was deleted by one of our directors.
Posted by MinerBumping at 00:50