So, you think you're a New Order ace? Time for a pop quiz, then. Try to guess what kind of ship loss led to the following reaction:

Pencils down before you look at the next screenshot. 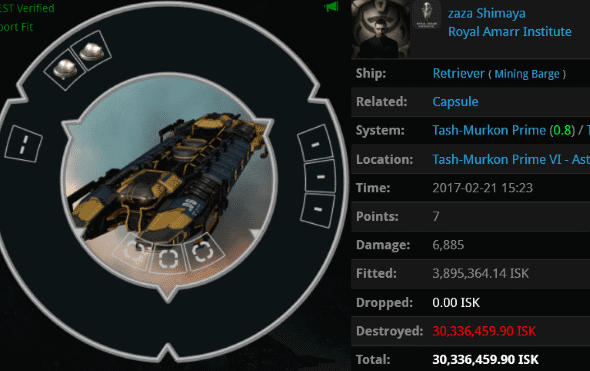 Yes, for some reason, they do tend to be the worst. If you guessed Retriever, you're probably feeling like a hotshot right now. Don't get too puffed up, though, dear reader.

Agent Liek DarZ responded to a routine call. The Code violation was committed by zaza Shimaya, who took nearly 20 minutes to return to his keyboard.

Another hostile miner--no surprise there. Agent Liek has helped countless miners with zaza's attitude, so he was still feeling pretty confident.

At first, Liek stuck to his prepared materials. Then the miner drove the whole conversation straight off the rails. 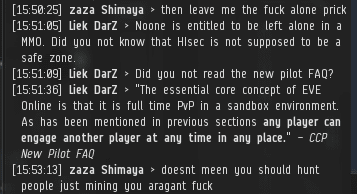 Despite having "played" EVE for more than seven months, zaza believed he was entitled to absolute immunity in highsec. If zaza was going to act like a clueless newbie, our Agent would have to treat him like one. Liek cited the official New Pilot FAQ.

Whatever else he was, zaza was candid. He admitted that he didn't care what the actual rules were or what CCP said about the game.

Seven months into EVE, zaza finally learned there's no PvE-only section of the game. No one cared enough about zaza to tell him. No one, that is, except an Agent of the New Order. Was this the beginning of an unlikely friendship?

Liek had established enough of a rapport with zaza to get him to confess another crime: The miner had been 100% AFK at the time of the gank. Liek already knew this, of course, but it's always nice to get a confession on the record.

Once again, zaza threatened to kill our Agent. Liek gently nudged the miner toward compliance with the EULA. If zaza got permabanned for making real-life death threats, there would be no way to sell him a mining permit.

Unfortunately, it seemed zaza's thirst for revenge could not be quenched merely by getting on a CONCORD killmail of one of Liek's Catalysts. He wanted to take Liek's face... off.

zaza was unusually toxic, even for a Retriever pilot. Liek had to wonder if the miner had been hanging out with Anti-Gankers. Where else would he learn to behave this way?

Liek had done his best to interpret zaza's comments as being consistent with the EULA. But zaza wasn't interested in veiling his threats with the slightest bit of ambiguity. That having been said, with his latest threat, one could argue that zaza promised to make Liek a star.

zaza conceded that his comments violated the EULA. However, he blamed our Agent for pushing him over the cliff. Ganking a 30 million isk Retriever was simply too provocative an act not to result in real-life death threats. Agent Liek exited the conversation in the hopes that the miner, if left by himself, would eventually calm down. 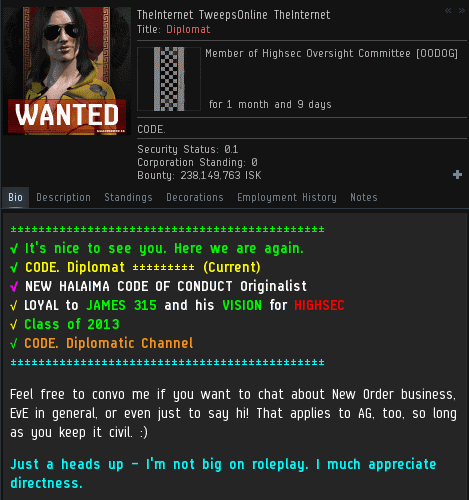 I am contacting you in my official capacity as a CODE. Alliance Diplomat. It has come to our attention that you have recently lost a ship. While it is likely that an Agent from our Enforcement Branch has already contacted you about your loss, the Diplomatic Team is following up nonetheless.

We would like you to understand that your relationship with the New Order doesn't have to be adversarial. Here is my offer: I will personally sell you a mining permit for 10m ISK. I would be your point of contact with the New Order from that point forward. This means you will have a friend inside CODE. who can give you good security advice and help you if you encounter any difficulty... 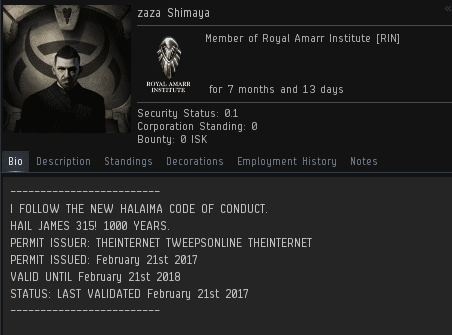 Ah, you didn't expect that this would end with a permit sale, did you? Next time, don't be too quick to feel like you're a hotshot. Highsec still has much to teach you.
Posted by MinerBumping at 18:08