The Search for Anti-Ganking, Part 5

Previously, on MinerBumping... Agent Alt 00 quested like a true champion. She sought to find an Anti-Ganker capable of absorbing the Code and becoming a Gallant.

Agents of the New Order deal with a lot of different people--it's part of the job. If you're an Agent-aspirant, good people skills are a must.

They say that every time a new space lawyer is born, a GM sheds a tear. FairyKiller Blog was convinced that Alt 00's ganking activities were a direct violation of the EULA. Someone on the support team told her so, she claimed. Sure.

Rebel miners have a twisted view of the world. In a carebear's eyes, even something as admirable as a medal from The Conference Elite can form the basis of an insult. 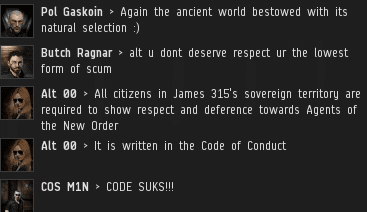 Alt 00 had her hands full dealing with the children of Nakugard. A frank exchange of ideas ensued. 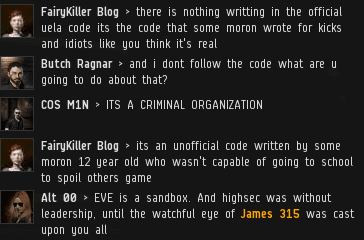 Actually, the "exchange of ideas" was pretty one-sided. Carebears don't have any ideas. 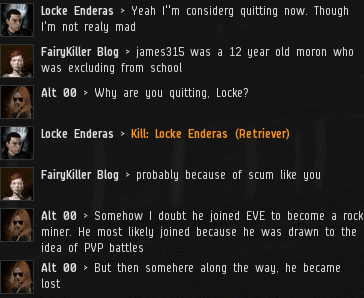 A new crisis emerged: Miner Locke Enderas was on the fence about renewing his subscription to EVE. Alt 00's priorities immediately shifted in Locke's direction--the game's player retention rates were at stake. 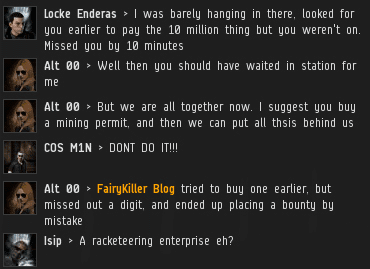 Locke offered some excuse about Alt 00 not showing up in time to receive payment. This is absurd, since you can always send someone isk regardless of whether they're online. (If you don't believe me, try sending one of our offline Agents 10 million isk right now.) 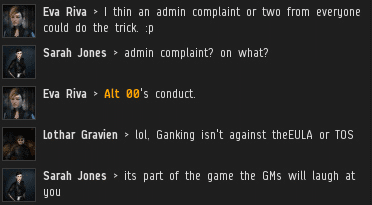 Somewhere in Iceland, another GM shed a tear. 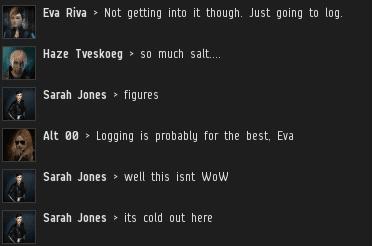 Rather than arguing the point, Eva Riva went offline. I guess she wasn't cut out for space law.

Locke came up with another silly excuse. Alt 00 brushed it off and contacted the miner in private. Maybe he would be more cooperative if she got him away from prying eyes. 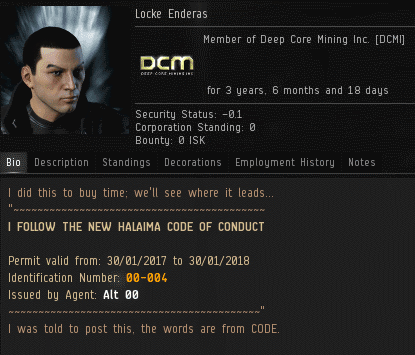 The miner sent our Agent the 10 million isk he owed her. Though he posted the permit in his bio, it contained some unnecessary disclaimers--a red flag for Locke's future. 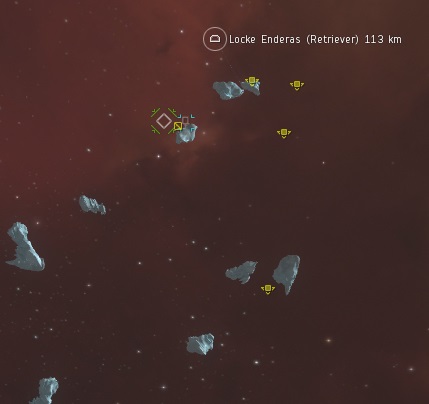 For now, though, Locke was free to enjoy the Nakugard ice anomaly all by himself. The permit-less miners had already been removed by Alt 00. 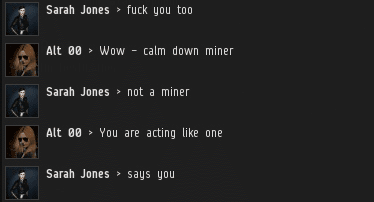 The benefits of Code-compliance should have been obvious. The permit-carrying miner got to mine, while the rest of the miners could only bemoan the unfairness of life under New Order rule.

The carebears of Nakugard were slow learners. Still, Alt 00 wouldn't give up her search for a Gallant.