The Search for Anti-Ganking, Part 3

Previously, on MinerBumping... Agent Alt 00 conducted an exhaustive search for competent, potentially Gallant Anti-Gankers. Though she found a few combat ships loitering in the asteroid belts, Alt 00 didn't encounter any Anti-Gankers capable of stopping her from ganking. But our Agent's curiosity was piqued when a Loki pilot killed her scout alt. 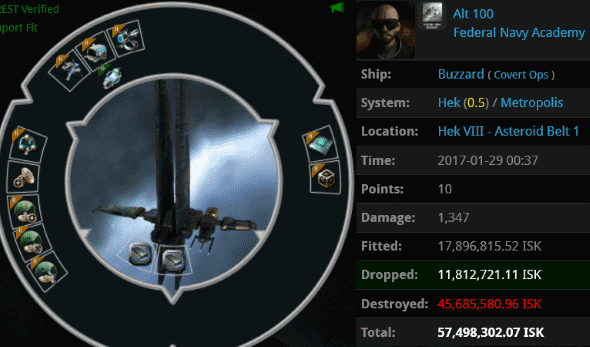 A fellow by the name of Lahnius destroyed the Buzzard while it was still flagged from looting a Mackinaw wreck. It didn't stop Alt 00 from continuing her ganks, but it was the most exciting thing to be produced by anti-Code activity in months.

Miscreants in Hek chatted in local while they waited for CODE. personnel to leave the system. Would Lahnius join them? 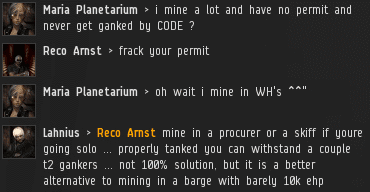 Lahnius advised the miners to trade in their yield-fit "gank me" boats for a properly tanked vessel. Alt 00 was intrigued.

Alt 00 could tell right away that there was something different about Lahnius. He didn't sound like a typical Anti-Ganker. He even suggested the miners buy a permit--a recommendation that requires more honesty than most rebels can muster. 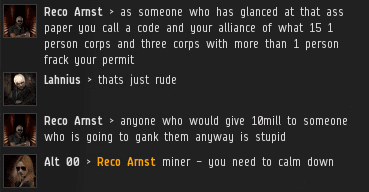 Was it possible that Lahnius could've become a Gallant, had he chosen a different path? 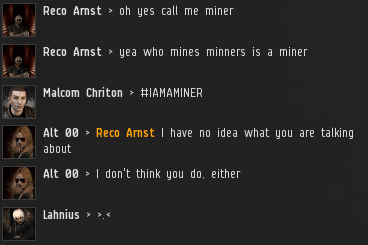 If you've ever wondered why so many people support the Code, visit Hek someday and watch the Goofuses.

As our Agent reflected upon what had happened, she realized it was time to step out of Hek and drop by Nakugard again...

...and she arrived just in time to see a miner make a real-life death threat in local. It was business as usual with the rebel carebears. 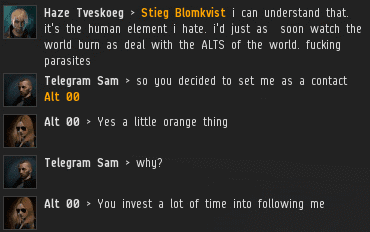 Earlier, Alt 00 noticed that a Tornado piloted by Telegram Sam was stalking her. When she went to Nakugard, Telegram followed her. The Anti-Ganker had blown his cover. 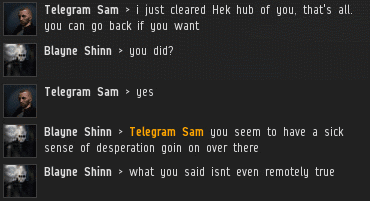 Telegram tried to take credit for ganking our Agent's Buzzard alt. It's an all-too-common practice of Anti-Gankers to steal credit for others' achievements, because they have none of their own. But unfortunately for Telegram, he was immediately called out on his lie by a Nakugard resident.

In fairness to Telegram, he once got on a CONCORD killmail of Alt 00's shuttle, which she undocked during her criminal timer to draw away CONCORD. Telegram's Tornado had scored zero damage on the shuttle; it was the closest he'd ever come to a victory. But he justified reporting fake news because the goal of stopping CODE. was so important.

Alt 00's scout returned to Nakugard in a fresh Buzzard, which was sighted by Telegram Sam's Tornado. Time to find out what the Anti-Ganker was made of.