Whatever you want to call it--persistence, endurance, perseverance--it's a powerful thing. Our Agents have it. The people who cry about wanting to quit EVE when they lose their first ship--those people don't have it. 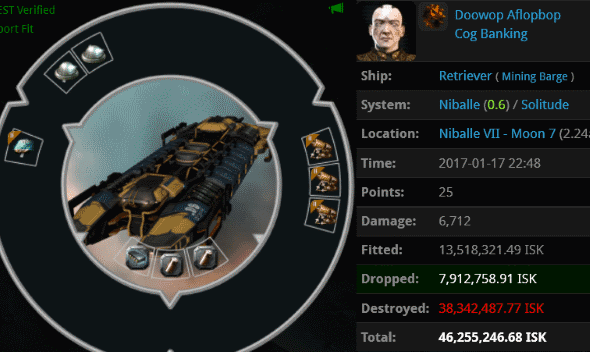 Every unlicensed miner represents an opportunity for our Agents to make another permit sale. But you can never know for certain how long it will take to persuade the miner to part with his money.

Agent Milkmypigeon stomped an unlicensed, AFK Retriever owned by Doowop Aflopbop. The miner's initial reaction was hostility. This probably wasn't going to be one of those quick, easy sales.

But then Milkmypigeon detected some mixed signals. Was Doowop angry about his loss, or did he appreciate the adrenaline rush?

Agent Dom Arkaral joined the convo and agreed with Milkmypigeon's assessment: The miner was enigmatic.

An "interrogation" consisting of a single question was enough to elicit a series of red-flag statements from the miner: His primary motivation was isk, he was willing to throw his roommate under the bus, and he lacked respect for the Agent who had bested him in elite solo PvP.

Doowop crossed the line. He condemned the New Order and refused to buy a mining permit, ever. It was a disappointing development. The signs had been there from the beginning, though. According to our Agents' intel, Doowop's corp was a wardec shelter for one of the local carebear alliances.

Eternity is a long time--long enough to test even an Agent of the New Order. But if you think Milkmypigeon was going to give up, you obviously don't know Milkmypigeon.

The very next day, Doowop invited Milkmypigeon to a convo. His lack of a mining permit had obviously been weighing on him.

There's no obstacle big enough to stop the Code. Eternity is but a minor speed-bump on our road to victory. 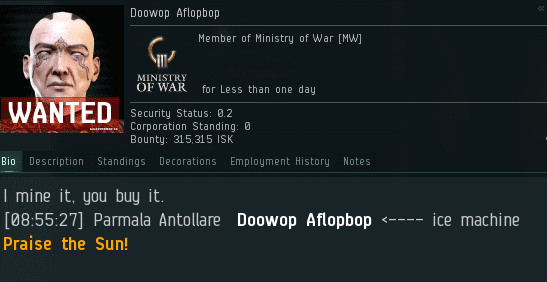 Alas, cruel fate! Within a few days, Doowop abandoned his own mining permit and left his corporation. For some reason, Doowop was cutting ties with everyone around him. He was a bot-aspirant. 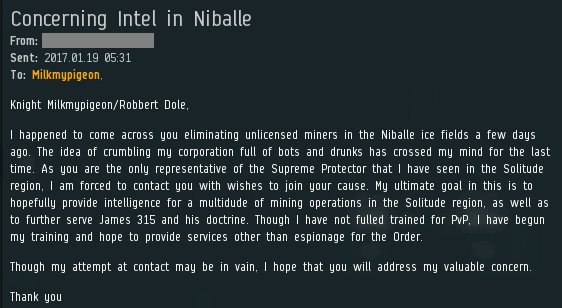 At the same time that Doowop was throwing away his chance at happiness, a spy emerged in the local carebear alliance. When one door closes, another opens. The Code will always get through.
Posted by MinerBumping at 17:22