The Search for Anti-Ganking, Part 7

Previously, on MinerBumping... Agent Alt 00 endured incredible hardships on her journey to find a potential Gallant among the Anti-Gankers. Her patience and persistence were rewarded when she encountered Lahnius, who was competent enough to kill her scout alt. Despite being a rock-ribbed Anti-Ganker, Lahnius saw the light and purchased some mining permits. 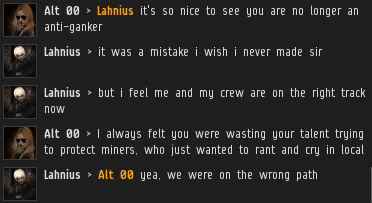 Alt 00 and Lahnius met up again in the Hek neighborhood. Lahnius and his crew were mining--in a Code-compliant manner. 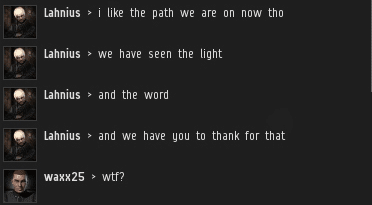 The locals were astonished to see the change in Lahnius. It was indeed quite a transformation, one only made possible by the Code. 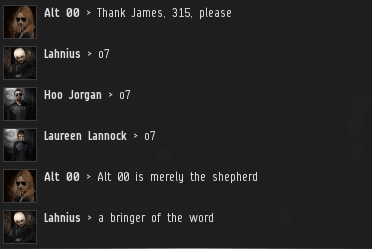 Whether his fellow miners and Anti-Gankers would accept the new Lahnius was another question entirely.

A few miscreants threw tomatoes. But now Lahnius was untouchable. Having seen both sides of highsec, he knew without a doubt he was on the right one. 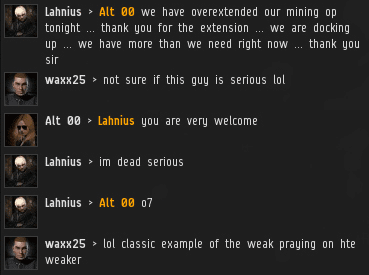 It's rare for an Anti-Ganker to display any competence, and even rarer for one to embrace the Code. Alt 00 felt Lahnius' story was so remarkable that she arranged to interview him by EVEmail. 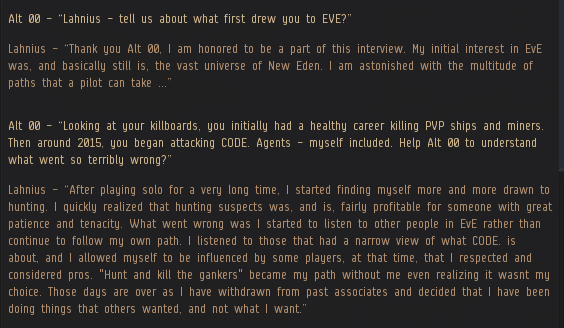 As Alt 00 explored Lahnius' background, one thing stood out: Lahnius was immediately drawn to PvP. That was a good sign.

As a prominent Anti-Ganker, Lahnius had plenty of behind-the-scenes experience with that "community". Now it was time to get an honest take. 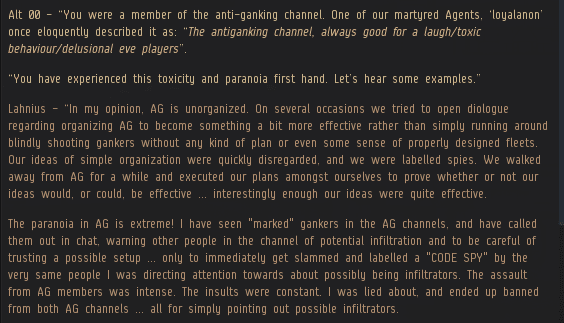 Incredibly, the Anti-Gankers managed to alienate (and ban!) one of their best soldiers.

Sounds like chaos in the Anti-Ganking "leadership". No surprise there.

Alt 00 asked Lahnius about the gank of her scout alt, which was described from Alt 00's point of view earlier in this series:

It's impossible to imagine such tense, gripping drama occurring in highsec without the Code. Everyone involved in enforcing the Code should take another victory lap. Well done. 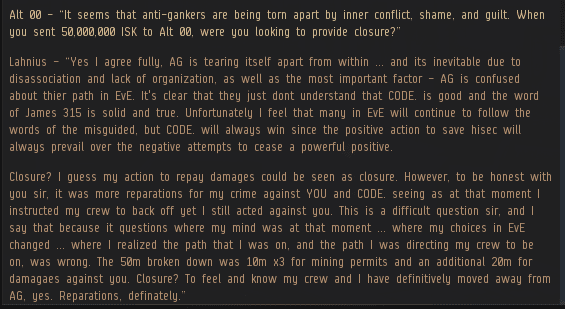 More keen insight into the Anti-Gankers. They could learn a lot from Lahnius' example.

Lahnius makes a good point here: A mining permit is not a license to violate the Code. I've noticed that the miners who reject the Code tend to be the ones with the least understanding of it.

We're still waiting on CCP to add something good about the Code in the official EVE tutorial. 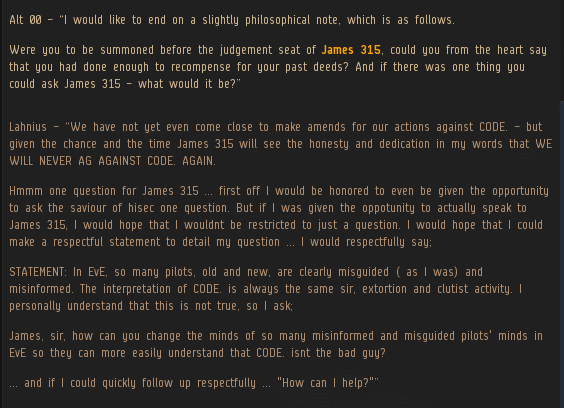 Lahnius, I'd say you're off to a good start already. Here's a more detailed response.

It was a long road for Alt 00, but so worth it. And now, a postscript:

The couple that slays miners together, stays together. What better way to achieve intimacy with your spouse, than by enforcing the Code?
Posted by MinerBumping at 16:51