The Vow of Poverty, Part 1 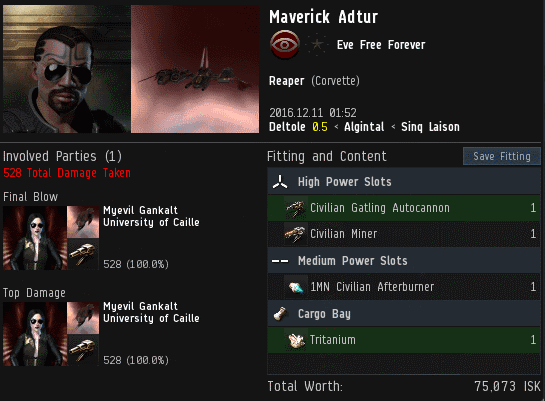 A significant breakthrough in the war against bot-aspirancy: Maverick Adtur's unlicensed Rookie ship was terminated while autopiloting. 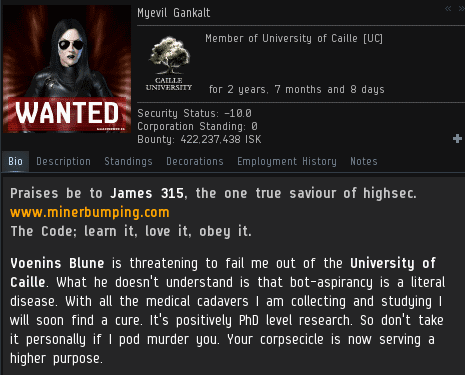 Agent Myevil Gankalt was the architect and executor of the brilliant strategy that led to this elite solo PvP victory. Myevil is one of countless Agents who enforce the Code from outside the CODE. alliance. The Code violators never see it coming.

Maverick didn't yet understand why he had to die. Myevil wasted no time in providing him with answers.

"For nothing?" In a few reckless words, Maverick completely dismissed the Code and thousands of supporting MinerBumping posts.

What began as a routine elite solo PvP victory grew into a territorial dispute. For no apparent reason, Maverick denied the sovereign authority of highsec's Saviour.

Then the miner threatened to get CCP involved. Myevil refused to back down. Our Agents are never afraid of space lawyers and their scurrilous petitions.

Out of nowhere, Maverick claimed he didn't have 10 million isk to spend. Myevil found this very suspicious. If Maverick couldn't afford to buy a permit, why didn't he say something about it earlier--instead of making wild claims about "free" highsec and contacting customer support?

The situation only became more bizarre. Maverick maintained that he had access to less than one million isk, but at the same time, he had a bunch of titans at his disposal. Highsec titans, at that.

Myevil tried her best to get the miner to speak the truth. That's no simple task; a bot-aspirant's first instinct is always to lie.

Next came a Faustian bargain: If Myevil Gankalt left the New Order, Maverick would give her the secret to ultimate wealth in EVE. As for Maverick, he would not share in the profits. For some reason, Maverick was committed to remaining poor. Perhaps to avoid paying what he owed the New Order?

Our Agent was faced with a truly unusual problem: A titan-wielding miner whose vow of poverty prevented him from ever getting enough money to buy a permit. Now what?

To be continued...
Posted by MinerBumping at 19:35