Though the New Order has a reputation for being extremely elite, it's not an elitist organization. In fact, we do more to help train new players and new gankers than anyone else in EVE. Consider, for example, our Venture ganking contests, which allow new players to get really involved in the game. 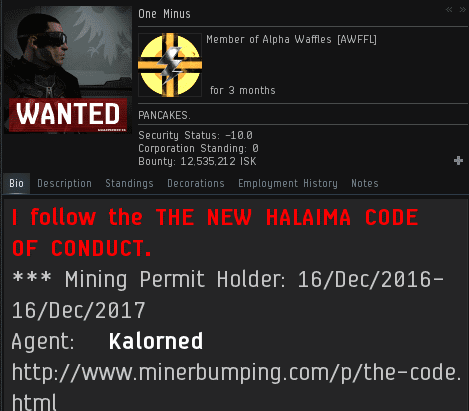 Agent One Minus heard about one of our recent Venture ganking contests. Excited to take part in such an event, he was soon scouring the asteroid belts of highsec. 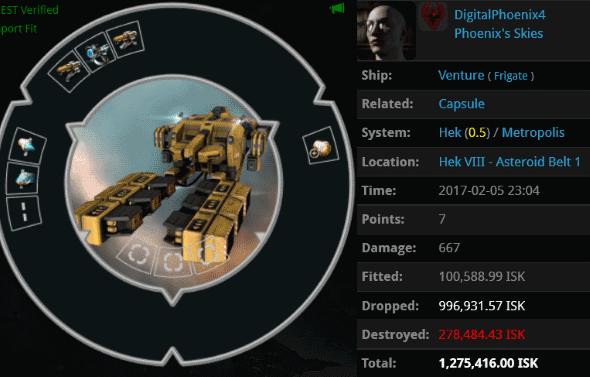 In Hek, One Minus discovered a pair of Ventures piloted by DigitalPhoenix3 and DigitalPhoenix4. Something inside our Agent told him that the Ventures could be botting, but One Minus decided to give the miner the benefit of the doubt. He ganked both Ventures and moved on without reporting them to CCP. 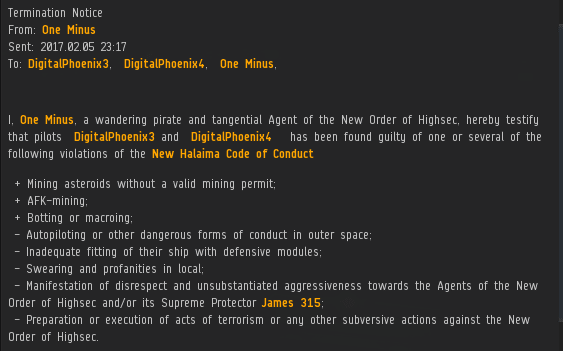 Then One Minus sent them an informative EVEmail. Even as he drafted the message, his suspicions about the DigitalPhoenix team grew. 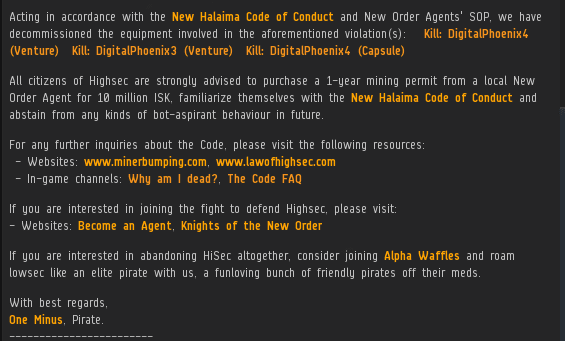 One Minus hoped that if he sent the miner in the right direction, the positive influence of the New Order community would pull him from the edge of the abyss. 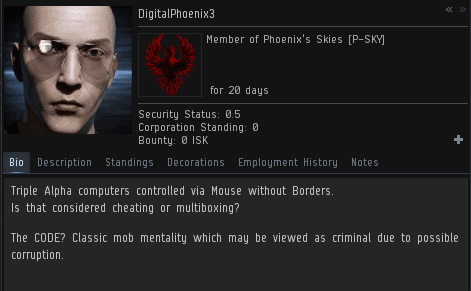 The next day, however, our Agent discovered the miner back in the same place, doing the same thing. A second pair of Ventures was destroyed. Combined with a reference in the characters' bios about using a tool called "Mouse Without Borders", it seemed botting was a real possibility here. Bot-aspirancy at a minimum.

One Minus made no secret of his disappointment. But surely being ganked four times would be enough to wrench the miner out of his routine.

Many hours later, the DigitalPhoenixes showed up in the MinerBumping channel. One Minus was thrilled and quickly answered his question about how to buy a mining permit.

Moments later, One Minus was shocked to receive a nasty EVEmail from the miner. DigitalPhoenix2 claimed no one had answered him in the channel, even though One Minus himself had done so. Our Agent was puzzled at first, but then he realized that this was one of those "Sixth Sense" type twists.

Before entering the MinerBumping channel, the miner had blocked One Minus. That's why he thought no one had answered him. With the help of another Agent, One Minus got everything straightened out and invited the miner to a private convo.

For someone who was satisfied earning so little isk per hour, DigitalPhoenix2 was in a big hurry.

Things looked good at first, but the rule against AFK mining turned out to be a deal breaker. Between that and the blocking incident, the DigitalPhoenixes were looking more and more like bots all the time. 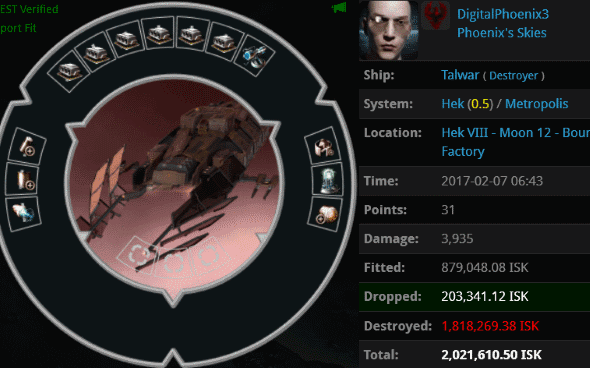 The next day, something had changed. The DigitalPhoenixes were back in Hek, but now they were in combat ships. Unfortunately, some habits are hard to break: DigitalPhoenix2's Thrasher and DigitalPhoenix3's Talwar were both AFK. One Minus killed them.

Because he was blocked by all the miner's alts, One Minus had to enlist the aid of a random passerby in Hek. He wanted so badly to reach the miner.

A member of The Marmite Collective contacted DigitalPhoenix3 but was threatened with a block himself. It was as if the miner was closing himself off from EVE, all for the sake of some half-baked botting operation. However, despite all the blocks, One Minus was able to get through to the miner: He stopped losing Ventures in highsec. And for that, he has the New Order to thank.
Posted by MinerBumping at 17:56