The Miner He Saved, Part 2

Previously, on MinerBumping... Agent Damien Oxytocin embarked on a thrilling mission to enforce the Code and rescue wayward miners. 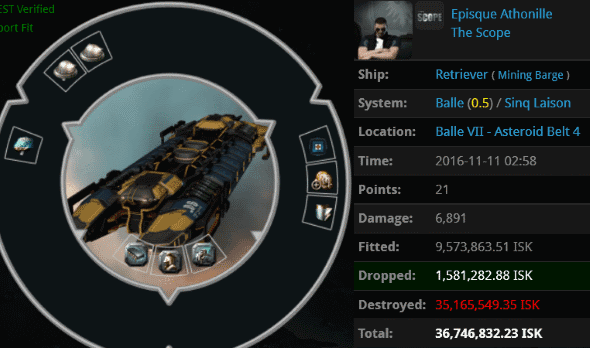 Damien was well aware that bad miners are attracted to the many temptations of 0.5 security systems. In Balle, Damien met Episque Athonille. Our hero acted quickly to remove the miner's disgusting Retriever from highsec.

Damien's first impression of Episque proved to be spot on. When the miner returned to his keyboard, he was in a grumpy mood. Maybe he was surprised that his warp core stabilizer hadn't kept him safe.

Not long after Episque lost his Retriever, he began making threats and inviting Damien to return to the asteroid belt. Damien's super-secret scout alt scanned Episque's new ship, a Megathron:

Damien was appalled to see such fittings forced upon a battleship. He didn't hide his displeasure with Episque's design.

Episque had a thin skin; he didn't accept the criticism of his Megathron very graciously.

It was evident that Episque was unfamiliar with the New Order and its Code. At this point in highsec's transformation process, only a bot-aspirant could be so ignorant.

Though he tried to defend his Megathron fit, Episque hedged by saying he had better ships--though naturally he wouldn't elaborate on the subject.


Damien Oxytocin > the catalysts will simply kill your lowly, unlawful, mining ships
Damien Oxytocin > I hope that you read the link I gave you, and that you follow the law, it would be unfortunate for you to lose more vessel and pride over this.
Episque Athonille > I don't read shit, you cannot claim this territory I am not required to buy a permit and fuck off
Damien Oxytocin > I may try to get you an audio version of that law book if you'd like, so that you don't strain your eyes on reading too many words.

Unsurprisingly, Episque was not a big reader. Our Agent tried to accommodate him. One way or another, the Code must be absorbed.

Damien let Episque go for the moment, but he kept a scout alt in the system to log local chat.

Once Damien exited the system, other miners began to speak up and give Episque advice.

One local resident outed herself as an Anti-Ganker. By her own admission, she'd failed to stop any ganks.

The miner mourned the loss of his Retriever and its cargo. Yet he showed no remorse for his violations against the Code.

Interestingly, the aspiring Anti-Ganker conceded that miners aren't killed if they obey the Code. Episque responded by making up a lame excuse for not buying a permit. He would've had plenty of cash if he'd sold that outrageous Megathron!

As for Damien, his journey continued. He would not rest until he found a miner he could liberate from bot-aspirancy.