The Search for Anti-Ganking, Part 4

Previously, on MinerBumping... Agent Alt 00's daring quest to find Anti-Gankers to reason with put her in peril: Her scout alt's Buzzard came face to face with a Tornado piloted by Telegram Sam.

A staring contest ensued between the covops frigate and the heavily armed battlecruiser. The CODE always wins, of course. 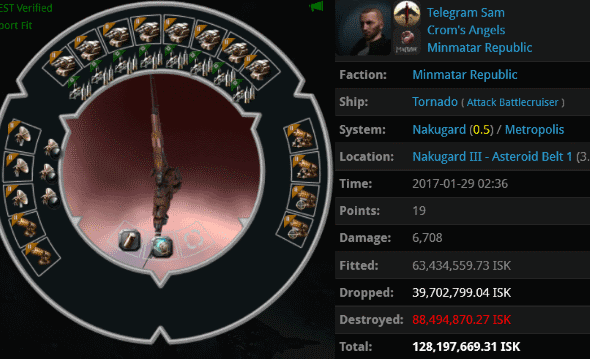 Always. Telegram's "ship that can't shoot back" was destroyed. Anti-Gankers are better at being ganked than preventing ganks.

Alt 00 was pleasantly surprised by Telegram's polite reaction to the gank. Of course, a Nakugard miner had to spoil the moment.

COS M1N was a fixture of the Nakugard mining scene. Despite being exposed to the Code on a frequent basis, he spent most of his days fuming in local chat. 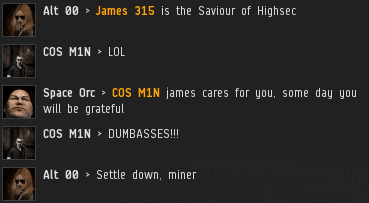 There was little to be gained in reasoning with the miner. Clearly, he'd dug in his heels long ago. 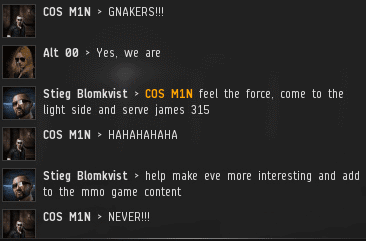 Sadly, rebel miners who do stay at their keyboards tend to misuse them. 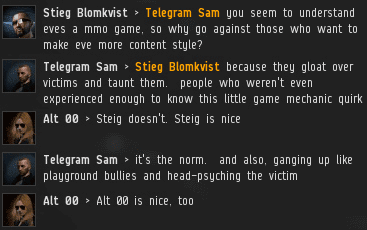 Alt 00 was disappointed to see that despite offering her a "gf" earlier, Telegram Sam wasn't the potentially Gallant Anti-Ganker she was looking for. He was a Gullible Gull. 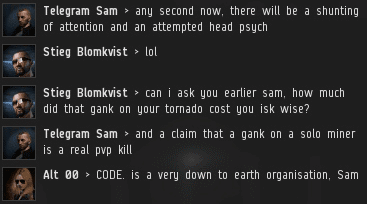 The Gullible Gull says to himself, "The bullying I've heard about will start any moment now... Any... moment..." He waits forever for any sign of it. But at the same time, he completely dismisses the actual EULA violations that rebel miners routinely commit. 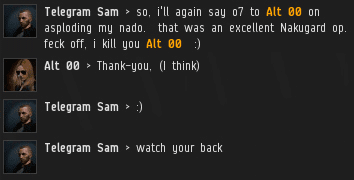 Telegram Sam excused himself and went to another system to fail at preventing ganks. 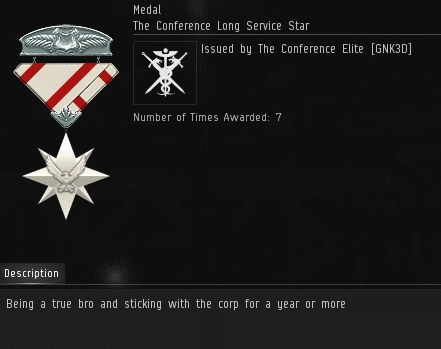 The next day, Alt 00 received some exciting news: The Conference Elite had awarded her the Conference Long Service Star! She was so proud of her medal that she couldn't wait to go to Nakugard and share the good news. 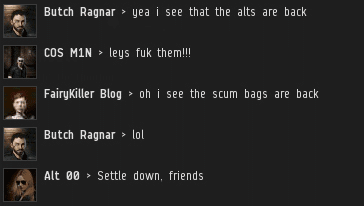 Our Agent's announcement about he medal was poorly received. The usual suspects were skulking around Nakugard and forced to dock up when she arrived. Obviously they were up to no good. 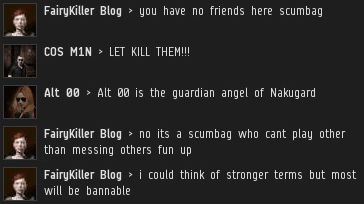 The threat level spiked when one of the rebel miners came up with a diabolical scheme to assassinate our Agent. 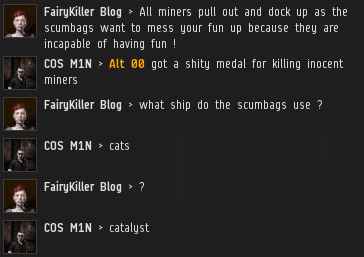 Using COS M1N's intel, the resistance fighters continued to develop their plan. Would Alt 00 finally encounter Anti-Gankers capable of preventing her from ganking?

As usual, the carebears were all talk and no action. Alt 00 began to seriously doubt whether a competent Anti-Ganker could be found anywhere.