The Search for Anti-Ganking, Part 1

Some highsec miners can be friendly enough--until they get the slightest hint that maybe they need to part with a little bit of their money.

Agent Alt 00 recently began a fact-finding mission in the highsec asteroid belts and ice anomalies. She was interested in investigating the so-called "Anti-Ganking" phenomenon. 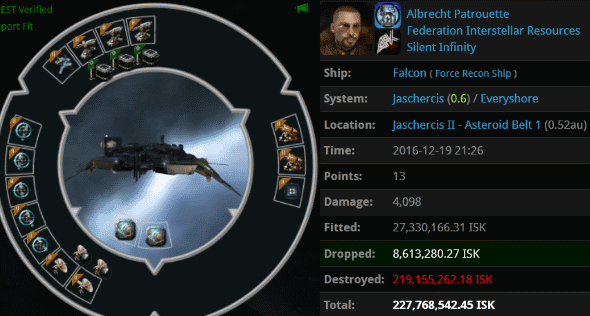 On occasion, a miner will switch into a combat ship, such as an ECM Falcon. If they intend to interfere with ganks, they get ganked themselves.

Albrecht Patrouette was quite the prickly fellow. From the moment he heard the word "permit", he became unapproachable. Obviously he wasn't having any fun in EVE. 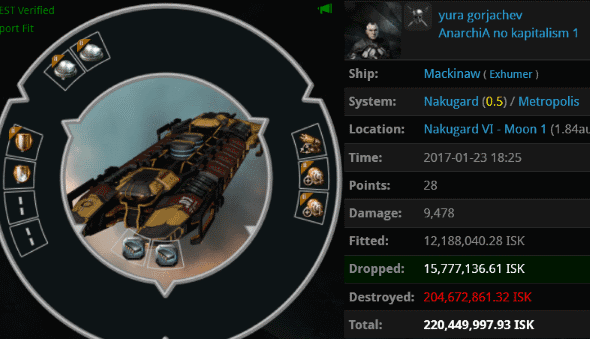 The Falcon pilot was an anomaly as far as rebels go; he was a miner but ready to re-ship into a jammer at a moment's notice. A month later, Alt 00's interest in studying the Anti-Gankers was renewed, following the destruction of a fail-fit Mackinaw. 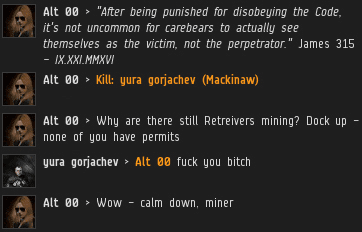 As it turned out, the Mackinaw was only the tip of the iceberg. Our Agent was surprised to find a nest of Retrievers nearby. Rather than docking up when a CODE. member entered local, they kept on mining--even after the Mackinaw was ganked!

Aha! Alt 00 determined that the Retrievers must've felt safe in the presence of an Anti-Ganker named Kira Norr. Earlier, Kira used a Gila to attack Alt 00's Catalyst mid-gank. Of course, Kira had failed to actually stop Alt 00 from destroying the Mackinaw. Still, Kira was undoubtedly an Anti-Ganker. 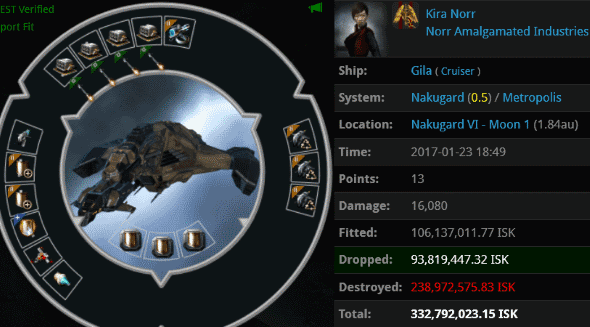 Our Agent took swift action. The Anti-Ganker's Gila couldn't defend those miners; it couldn't even defend itself! 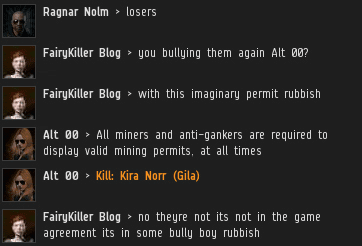 The triumphant sound of Alt 00's victory blared across the system. Alt 00 took satisfaction in the fact that she'd been able to locate an actual Anti-Ganker doing Anti-Ganking things (or trying to, anyway). 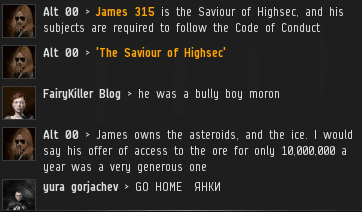 As expected, the Anti-Ganker was powerless to stop the New Order. Still, Alt 00 hoped that she might be able to force more interactions with the elusive Anti-Gankers and learn what makes them tick. 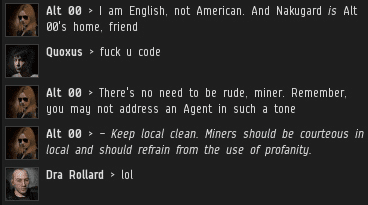 In the wake of her tremendous victory, Alt 00 did an impromptu "meet and greet" with the locals. However, the Anti-Ganker she'd killed remained silent. 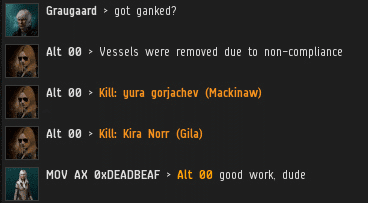 Why would an Agent of the New Order take any interest in the Anti-Gankers, you ask? Because they're EVE players who reside in highsec. In Alt 00's eyes, that made them worth saving. 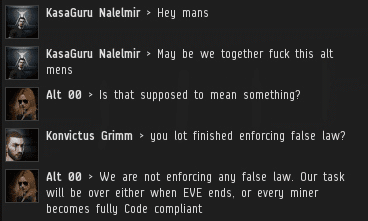 A few rascals voiced anti-Code sentiments in local, but there was no further Anti-Ganking activity. Nevertheless, our Agent was determined to get an audience with a bona fide Anti-Ganker and see if she could persuade him to switch sides.

To be continued...
Posted by MinerBumping at 19:32