It's that time again... You know what time it is. Let's get going. 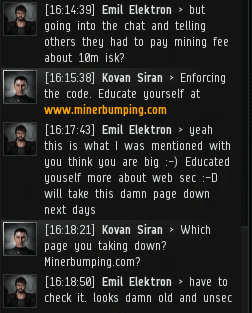 If you're reading this, it means the rebels failed again. The CODE always wins. Always!

Sometimes I feel like we need a wiki to keep track of the backstories of all these anti-Code people. All I know is, at a certain point, Codex Biovector became a thing in the comments section. 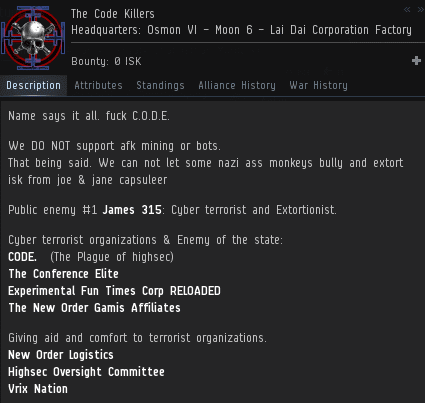 A new challenger has entered the ring! Don't get too excited, though. The corp only has one member.

At least he called him an Agent. Still, carebears can be such downers.

An argument broke out between Agent Ralliana and Mr Jawa, who was convinced Ralliana couldn't use a ship in highsec.

Some carebears don't accept the reality of EVE's game mechanics, even after witnessing said mechanics and losing a ship to them. They think if they argue enough with our Agent in a private convo, their ship will reappear and be waiting for them in their hangar. 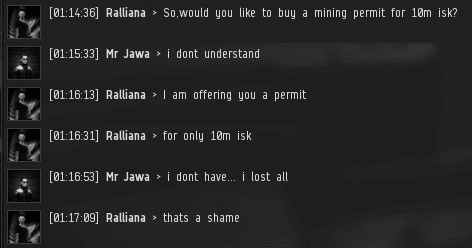 Mr Jawa lost everything he owned... but he gained a friend.

Never trust a highsec miner--especially if he doesn't have a permit. They'll sell out anyone, even their own children. Here we see Heliocentristic Chastot throwing his dog under the bus instead of accepting responsibility for going AFK in an asteroid belt. There's a reason dog is man's best friend and not "bot-aspirant's best friend".

Agent Snigie Audanie returned to his keyboard and, like the professional he is, calmly got to work dealing with the ruckus in local.

I hate to break it to you, miners, but every dog is secretly a Code supporter. Instinct. (Don't use this as an excuse to abuse your pets, please.)

Carebears can be so forgetful.

We're about to see another reason why the CODE always wins (always). Can you guess what it is? 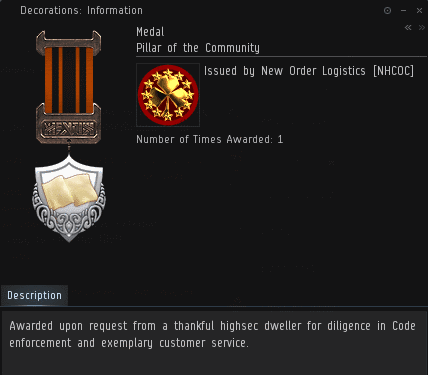 The New Order knows how to have fun playing EVE. This gives us a distinct advantage over our enemies.
Posted by MinerBumping at 19:14