The Search for Anti-Ganking, Part 2

Previously, on MinerBumping... Agent Alt 00 embarked on an exciting expedition. The goal: To locate an Anti-Ganker and talk sense in him.

Alt 00 attempted to flush the Anti-Gankers out of hiding by ganking some mining ships. This did provoke a response--from other miners. 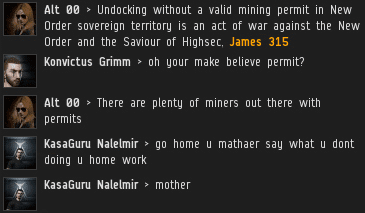 Earlier, Alt 00 destroyed an Anti-Ganker who was using a Gila to provide comfort to a nest of Retrievers. Once the Gila was gone, the Retrievers fled in terror. But one stayed behind. 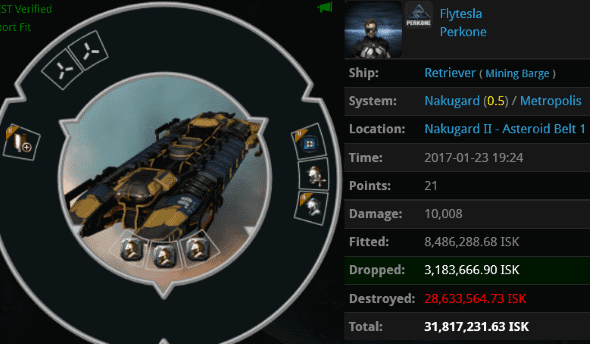 Flytesla's fail-fit Retriever shocked and appalled our Agent. It was tanked, sure--for a Retriever--but it lacked mining equipment. In other words, Flytesla's isk/hr rate was slightly less than that of other highsec miners. 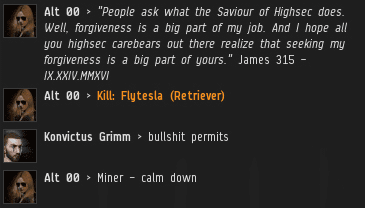 The martyrdom of Flytesla threatened to ignite a protest in local. Konvictus Grimm's rage was only the beginning: 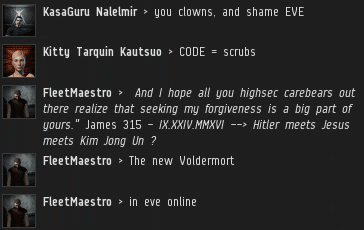 Alt 00 looked at the rebel miners and shook her head. They looked like they were almost ready to start dumping tea into a harbor. All this over 10 million isk? Spoiled miners. 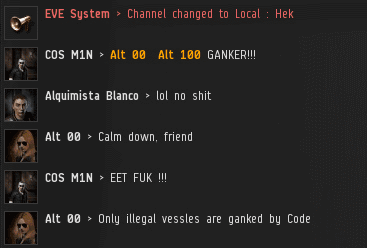 Our Agent moved next door to Hek and was immediately spotted by a lookout. Obviously there was some illegal activity going on here. 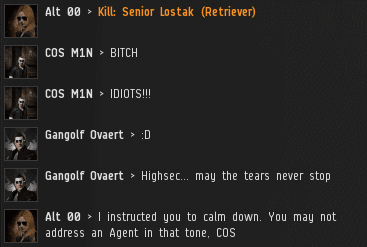 As Alt 00 suspected, an unlicensed mining operation was already in progress. Our Agent shut it down. The termination was followed by a public outcry, but no Anti-Gankers were yet to be seen.

Sometimes it feels like the hearts and minds of highsec are so stubborn. On such occasions, one might get the impression that the New Order's good works go unappreciated. 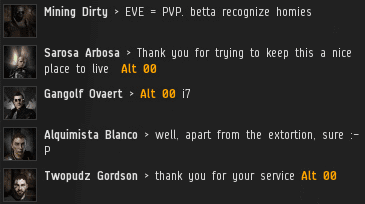 ...But the truth is, there are countless Code supporters in highsec. They love and respect our Agents. 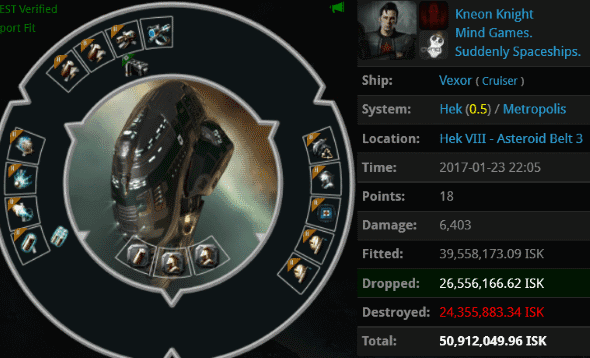 Alt 00 scouted the rest of Hek's asteroid belts and noticed a Vexor loitering in one of them. She killed it, just in case it belonged to an Anti-Ganker. Then she returned to Nakugard to see how things had progressed in her absence. 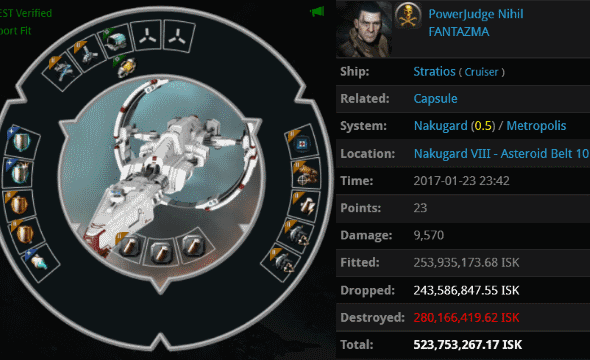 Another combat ship was found in an asteroid belt. This time it was a 523 million isk Stratios. Alt 00 destroyed the vessel and recovered about a quarter billion isk in loot. The Stratios' presence in the asteroid belt was suspicious, but there was no confirmed Anti-Ganking activity. 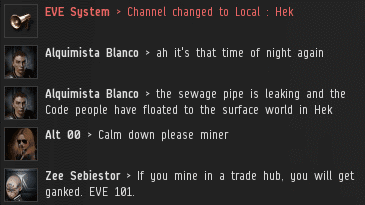 A few days later, Alt 00 made another visit to the Hek system. The usual suspects made complaints in local. The asteroid belts were vacant; if there were any unlicensed miners, they all docked up when Alt 00 entered the system. Then Alt 00's scout spied a lone Mackinaw chewing on the rocks.

At last! Alt 00's numerous trips to the busy trade hub had paid off. A pair of Anti-Gankers tried to stop her from killing the Mackinaw. 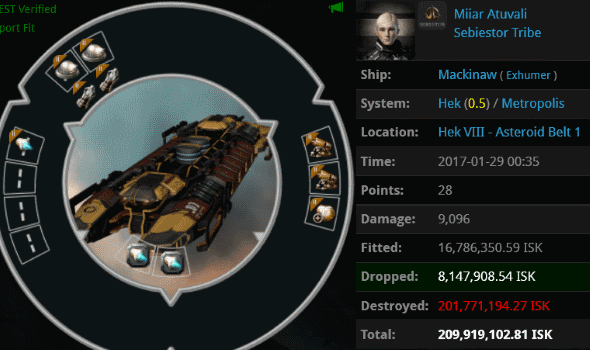 As usual, the Anti-Gankers merely got on CONCORD killmails and failed to prevent the gank. Still, they had tried to do something. Alt 00 was one step closer to making contact with an intelligent Anti-Ganker.

At that moment, the unexpected occurred: 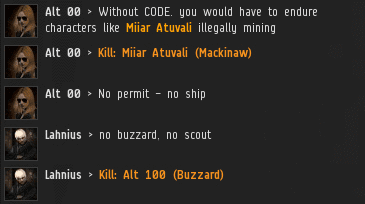 When Alt 100's Buzzard scooped the Mackinaw loot and went suspect, a Loki showed up and popped it. Was Lahnius the Anti-Ganker our Agent had been looking for?