Five years ago today, the Code was unleashed upon an unsuspecting world. Five years. One can scarcely remember what our world was like back then, for so much has changed--changed because of the Code.

Unless we deliberately take time to look back now and again, it's easy to forget that highsec and EVE weren't always the way they are now. It's easy to lose sight of the great transformations that have taken place and are still taking place. That's why June 24th is Code Day. So we can catch a glimpse of the bigger picture.

With that in mind, I'd like to examine the present state of highsec and EVE. But, in fact, there are two EVEs today, and they are in two very different conditions. There is the EVE of highsec, which is under the firm and ever-tightening control of the New Order, subjected daily to all the benefits of said control. And there is the EVE of the outer regions, dominated by the powers of nullsec.

Today we'll talk about the outer regions. The state of that EVE is... 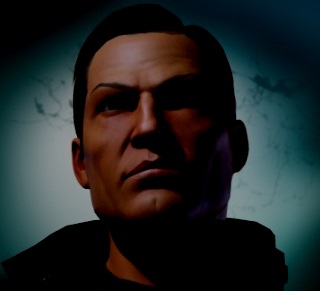 Traditionally, nullsec has been the stage upon which EVE was played. Nullsec represented EVE's purpose; the rest of EVE existed merely to supply nullsec with ships, equipment, money, and new players. You might say that highsec and lowsec were nullsec's feeder corp.

In turn, nullsec provided EVE with, well, EVE. Nullsec was EVE's content. It produced the titanic wars and epic stories which made EVE famously "more fun to read about than to play". That drama and those great wars were EVE's unique selling point. And a game with spreadsheets for its UI certainly needed a unique selling point.

The state of that nullsec, that EVE, is what I am going to talk about first. It's not going to be pretty. You may consider my darkened portrait above to represent a Real Talk Warning. I don't want to get any EVEmails from people saying, "Nobody told me there would be real talk. If you had warned me, I would've bought a permit!"

Let's not mince words. The traditional EVE is in a state of the deepest despair and pessimism. Never before has it descended into a state of such utter darkness and disrepair.

You answer, "What about the Summer of Rage? EVE lost more subscribers and had to fly The Mittani to Iceland for an emergency summit."

Ah, but back then EVE had far more subscribers to lose. The rage was hotter because people still had the capacity to feel something for EVE. CCP still cared enough to call upon The Mittani, as humiliating as it was for them to do so. Ours is the Summer of Apathy. The players do not organize protests to demand change; they simply melt away.

In late 2016, EVE's subscription numbers, as reflected by the number of logged-in players (CCP no longer releases subscription data) were in a terrible state. CCP broke with EVE tradition by offering free-to-play alpha accounts. Logged-in player numbers skyrocketed, and then utterly collapsed over the next several months. 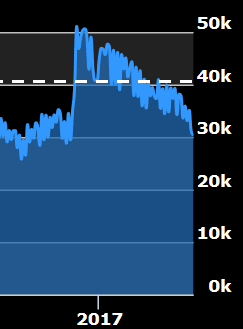 This chart comes courtesy of Chribba's data. Long story short, the numbers fell off a cliff, and are still falling. But things are worse than the chart would indicate, because now the logged-in player numbers include non-paying alpha accounts. Thus, as these numbers fall, the number of paying subscribers is still lower. We cannot say with certainty what percentage of logged-in players are alphas, but we can reasonably estimate that they're a significant minority. EVE's subscription levels are at their lowest point since, let us say, 2006. However, back in 2006 the numbers were rising instead of falling, and there was potential for future growth.

We haven't gotten to the bad part yet.

It is in this context of financial desperation that CCP has chosen not to invest any real time or resources in EVE's future. Long gone are the days when CCP's staff and money were focused on new content and development for EVE. Those things are dedicated to CCP's VR games now. What EVE gets is a lethargic skeleton crew of developers who have been ordered to squeeze every last bit of microtransaction money they can out of the game while CCP considers the possibility of closing up shop and selling out.

In other words, EVE has little chance of improving beyond its current state. Which might not be such a bad thing, were it not for the fact that nullsec is horribly, inescapably broken.

Much has been written about jump fatigue and FozzieSov. Here it will suffice to offer a brief sketch of events. By late 2014, CCP decided that they didn't like the way nullsec was going. There had long been much crying about the "blue doughnut" in nullsec. Despite the complaints, massive wars were far more common back then. Just as an example, there wasn't much time between the massive Fountain War (summer 2013) and the even more massive Halloween War (beginning autumn 2013 and stretching into 2014). Nevertheless, CCP feared the possibility of too much space being controlled by a single entity (that is, the Imperium), which could lead to the pacification of nullsec. It has also been said that CCP feared the server strain of too many players being in a single system for some of the battles.

CCP's solution was to completely shift the focus of nullsec warfare. Before, it had been all about big wars, big battles, big stories--the unique selling point of EVE. The new plan was to create game mechanics that would encourage small, localized conflict. That way, people wouldn't need to travel so far to look for a fight, and maybe smaller, weaker entities would have a chance at carving out a piece of nullsec without joining a big coalition.

In late 2014, jump fatigue was introduced, effectively making fast transportation around nullsec impossible. In the summer of 2015, Dominion sov was replaced with FozzieSov. At first, it appeared that CCP got what it wanted. The effect of jump fatigue was essentially to expand the size of nullsec by an exponential degree; players couldn't teleport across the map to join every fight. Conflicts, to the extent that they occurred, were small and local. Unfortunately, what CCP wanted wasn't very good or interesting.

As the months wore on and subscription levels declined, CCP got buyer's remorse. They worried about the lack of large-scale wars, which normally brought media attention, new players, and a lot of re-subbed old players. To CCP's great joy and relief, they soon received manna from heaven--or rather, from EVE gambling websites.