Previously, on MinerBumping... Disgraced leader of the anti-Code "movement" Rusell returned to the Anti-Ganking channel to deliver a fiery sermon against the New Order. But could he make his fellow rebels forget about his most recent defeats--and get them to embrace him as their leader once more?

Rusell sidled up to Jennifer en Marland, one of the channel moderators. A few words of flattery to consolidate his position and Rusell was on his way.

That was enough sucking up. Rusell pivoted from his unsolicited compliments and got ready to wind himself up for another anti-Code rant. He began by cursing the mighty CODE. alliance for ruining Red Frog Freight's profit margins.

Rusell expressed his insincere appreciation for PvP'ers of all stripes. He had no problem with risk in highsec, you see. But he made an exception for Goons and CODE. They took the whole PvP/risk thing too far.

Rusell offered his most cogent explanation yet of why he couldn't accept the gankers, despite loving PvP and risk. According to Rusell, ganking exploits a flaw in the highsec game mechanics--mechanics which CCP hasn't put the finishing touches on after 14 years.

Tickles TheClown came to the Anti-Ganking channel seeking help with wardecs his corp had received. Instead, his concerns had been shrugged off by Rusell, who saw non-CODE. adversaries as a mere distraction.

Rusell again advised Tickles to simply drop corp and avoid the PvP and risk he loved so much. With that problem solved, Rusell returned to his sermon about CODE.'s "exploits".

It soon became clear that Rusell's reputation for unquestioned wisdom had indeed taken a hit. Bogus Military Jargon challenged him to name an exploit used by CODE. Rusell side-stepped the question by repeating his accusations.

Rusell claimed that CODE. exploits exploits in the game. Needless to say, it's an outrageous lie. From its inception, our organization has always acted well within the boundaries of the EULA. We're arguably the most EULA-compliant group in EVE.

Jennifer urged Rusell to put aside his burning hatred for the New Order. But Rusell was committed to his mission of vengeance.

Carebears complain that highsec is too dangerous because they don't "expect" to be attacked there. One might assume that all of our warnings over the past five years haven't gotten these Goofuses to adjust their expectations. More likely, the skill and stealth of our Agents is so great that we're always able to take our enemies by surprise. This is known as elite PvP.

Tickles' pity party threatened to divert too much attention, so Rusell quickly got the conversation back on track by talking about himself again.

As Rusell began another speech, he name-dropped a corporation called Iustitiae. Rusell founded Iustitiae in September 2015. Since then, Rusell had moved heaven and earth to try to get the corporation to grow. In spite of his efforts, the corp's population flatlined. 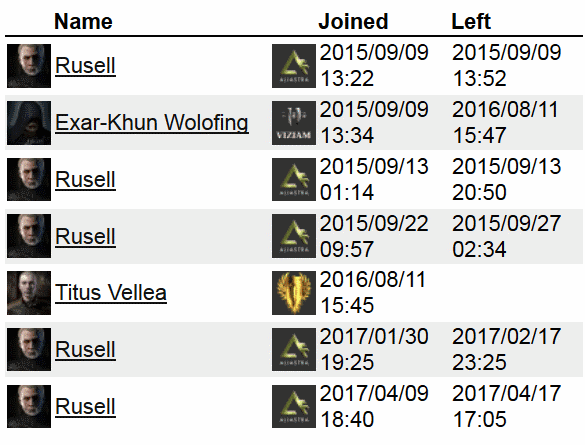 This is the corp's entire EveWho join history. Iustitiae currently has one member.

The Anti-Ganking channel had nothing better to do than to listen to Rusell reminisce about the once-great Iustitiae. At its height, it had two members.

At any moment, Rusell could snap out of his doldrums and launch his next attack against CODE. Would the New Order survive?

To be continued...
Posted by MinerBumping at 16:25