Previously, on MinerBumping... The Code gave Agent Aaaarrgg an extraordinary amount of power. Though some claim that power tends to corrupt, Aaaarrgg used his power in a wise and responsible manner. But the carebears, in their wickedness, couldn't bring themselves to appreciate it it.

Aaaarrgg and his alt had ganked Ruro DeepThunder. Ruro took his enemies' superior numbers and firepower as a sign of weakness: If the New Order really controlled highsec, they'd use only one ship per gank.

Needless to say, Ruro had a lot to learn. And our Agent was willing to teach him, as he'd taught so many others.

Aaaarrgg offered Ruro the chance to join the New Order and learn how to have fun in EVE. Ruro turned him down--an incalculably poor decision that helps explain how Ruro had become a highsec miner in the first place.

As a philosopher once said, when people see a weak horse and a strong horse, they naturally tend to like the strong horse. Agent Aaaarrgg's power and prestige has won him the affection of highsec, including many among the very carebears he kills. Wherever he goes, he is greeted with cheers. 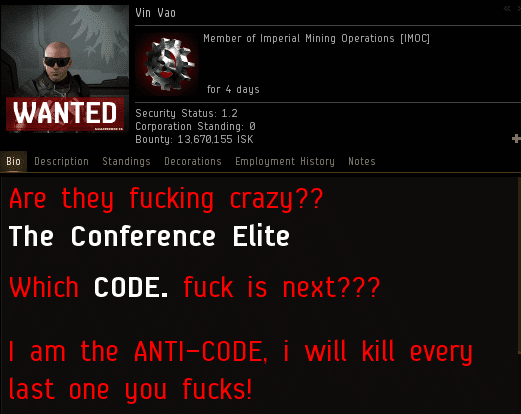 Aaaarrgg didn't know it yet, but he was now in the cross-hairs of one of the deadliest members of the anti-Code resistance.

Conducting business as usual, Aaaarrgg ganked some carebears with his trusty Thrasher and docked up during the Global Criminal Countdown timer. Meanwhile, Vin was on the hunt.

If we're being honest--and this is MinerBumping, so we are--Vin wasn't the best of hunters. When he didn't see Aaaarrgg at any of the system's stargates, he quickly grew frustrated.

Vin eventually put the pieces together: Aaaarrgg was docked in a station. But why? Vin assumed the Agent was acting out of cowardice. He didn't know about the post-gank GCC timer.

One of the many unnecessary restrictions on highsec fun is that when you get CONCORDed, you can't simply get into another ship and have more fun. Instead, you must wait until your GCC timer runs out. If you undock during that period, your new ship will be CONCORDed, too. For this reason, Aaaarrgg couldn't pay Vin a visit yet.

Vin wasn't interested in the whole "game mechanics" aspect of the problem. He wanted a fight with Aaaarrgg, and he wanted it now.

One of the reasons our Agents are so scholarly is that they read fine literature during their enforced post-gank time-outs. Aaaarrgg perused Vin's killboard to see if he could discover what was troubling the gentleman. 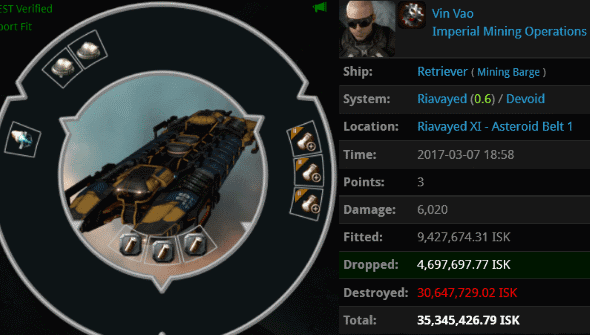 Our Agent found the source of the problem. Vin was still sore over the loss of his staggeringly fail-fit Retriever.

Vin spent some more time waving his text guns in local, but it didn't make Aaaarrgg's GCC tick down any faster.

The rebel's fury intensified. He could only keep this up for so long.

At the very moment Aaaarrgg was about to undock, Vin gave up the hunt and left the system. When the dust settled, the New Order held the field. It was a huge victory for Aaaarrgg--and further confirmation that he was right to embrace the Code.

We're on the right track.
Posted by MinerBumping at 16:10