Previously, on MinerBumping... Melancholy in the Anti-Ganking channel! After a carebear stopped by to get help with a wardec, Rusell seized control of the conversation. Soon the channel became a platform for Rusell's wistful monologue about Iustitiae, a corp that Rusell founded--and yearned to build into something bigger.

Managing and building a corporation can take a lot of time and energy. Rusell warned his fellow Anti-Gankers not to reinvent the wheel. For example, Rusell's precious Iustitiae was very similar to the Provi Bloc coalition. 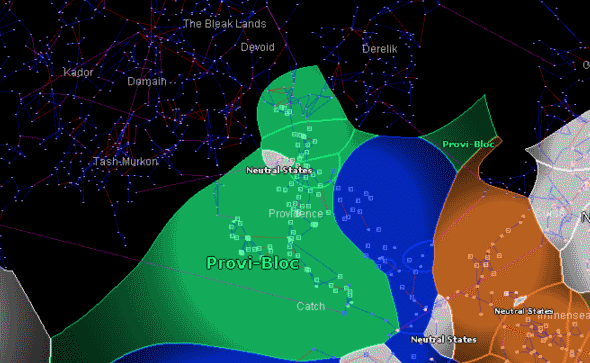 Provi Bloc has well over 10,000 members and controls a chunk of southern nullsec along the lowsec border.

Iustitiae's membership fluctuates between one and two members and consists entirely of Rusell's alts. In hindsight, the comparison seems obvious.

Rusell longed to return to a PvE-oriented life. But his commitment to the rebel cause would not allow him to be a man of peace. Not until the mighty CODE. alliance was destroyed.

Even fellow rebel Sarah Flynt was dubious of Rusell's claims--after she looked up the membership size of Iustitiae. Rusell assured her that Iustitiae's inactivity was due to the fact that he'd abandoned it. It was too much work.

Surveying his achievements over the years, Rusell wondered aloud if maybe it was time for him to retire, to pass to the torch to the younger generation. To let them have their time in the sun.

Can he see us?

For people who are so bad at EVE, the Anti-Gankers take the game very seriously. Perhaps they'd enjoy EVE more if they learned how to laugh of the things.

The patriarch of the resistance felt his energy waning. The only thing that drove him onward was the dream of crushing the New Order.

Besides, other forms of entertainment require even more PLEX than EVE does.

If there's one thing Rusell doesn't like doing, it's talking about himself. Rusell urged Sarah to let the matter drop--and then fished for people to beg him to stay.

Enough of this self-indulgence. Rusell reminded himself of the cause he was fighting for. When this day was done, he would have a solid plan to defeat CODE., once and for all.

To be continued...
Posted by MinerBumping at 18:48